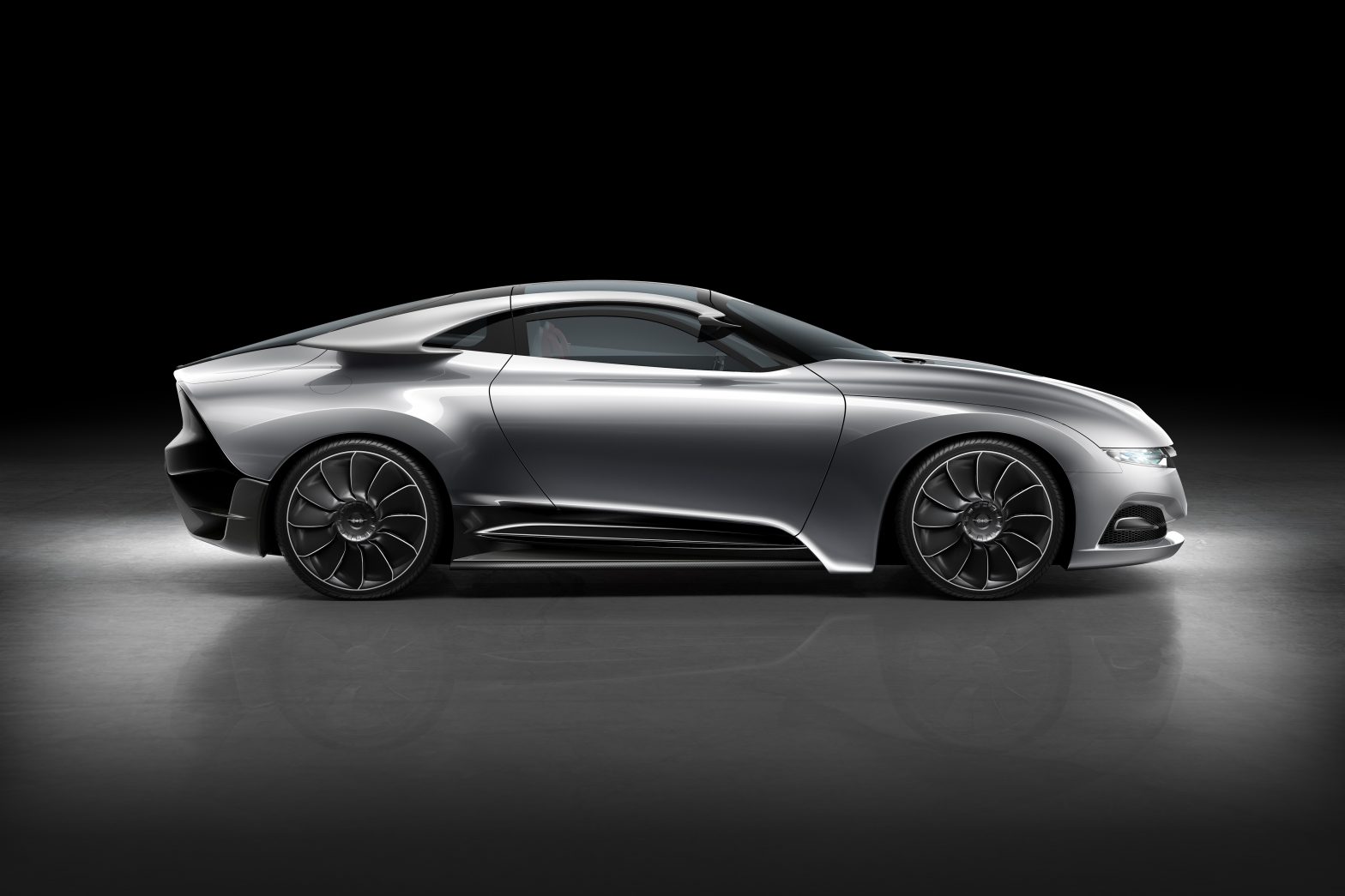 In Geneva, Saab has revealed its PhoeniX concept car, a showcase of design and technology.

The aerodynamic concept introduces what Saab is calling “aeromotional” design language. Its “liquid metal” forms are meant to evoke the perception of motion while allowing the PhoeniX to slip through the air with a drag coefficient of just 0.25. Side winglets also helf manage airflow from the front to the rear of the car.

Powered by a 1.6-liter turbocharged 200-horsepower engine with direct injection, supported by Saab’s eXWD electric rear-drive 25-kilowatt motor-generator. The eXWD system has three modes: Eco for saving fuel, Sport for maximum power and torque vectoring, and Traction, which provides optimum grip. The PhoeniX can accelerate to 62 miles per hour in 5.9 seconds, and has an electronically limited top speed of 155 miles per hour.

Inside the 2+2 PhoeniX concept, the driver will find a driver-focused, minimalist cabin. Also in this concept, Saab is debuting its new IQon infotainment and communication system. The IQon system employs an eight-inch touchscreen and Goggle’s Android system for internet communication, navigation, music, and applications.

According to Saab, we can expect to see IQon infotainment, eXWD, and the “aeromotional” design language moving forward into upcoming Saab vehicles.

Scroll down for more details in the official press release.

Sleek, innovative and exceptionally efficient: the Saab PhoeniX concept car showcases design features and technologies which will shape the next generation of cars from Saab.

Based on an new architecture which will empower the next Saab 9-3 model, the PhoeniX introduces ‘aeromotional’ design: a visual evocation of the aerodynamic design principles and passion for innovation that inspired the creators of Saab’s first car, the iconic Ursaab.

The clean, muscular shape enables an exceptionally low drag co-efficient of just 0.25 and also explores the potential for airflow management through the use of distinctive, side-mounted ‘winglets’.

Butterfly opening doors give easy access to a 2+2 cabin that blends simplicity with technology. It has a minimalist, ‘stripped out’ feel, including a new expression of Saab’s driver-focused layout and a world debut for Saab’s innovative IQon infotainment and communications system. In true Saab tradition, there is also a surprisingly versatile cargo deck.

“The PhoeniX establishes a new reference point for the future of Saab product design,” says Jason Castriota, Saab Automobile’s Executive Design Director. “It symbolizes a renaissance of the innovative spirit and passion that drove Saab to build its first car. We’re now taking the visual DNA forward with what we call ‘aeromotional’ design, adding emotion, power and fluidity. This design aesthetic will shape and differentiate future models in the Saab portfolio.”

Under its rippling bodywork, the Saab PhoeniX deploys an innovative driveline, with an electrically-driven rear axle mated to a sophisticated 200 hp, 1.6-liter gasoline turbo engine. The result is an intelligent, hybrid all-wheel-drive capability that enhances driving pleasure while reducing fuel consumption. Combined cycle fuel economy and CO2 emissions are projected to be just 5.0 l/100 km and 119 g/km.

The PhoeniX’s ‘aeromotional’ design theme is inspired by Saab’s aviation roots and draws expression from Ursaab, the prototype designed by aircraft engineers that spawned Saab’s first generation of cars.

The entire form of the PhoeniX is seemingly molded by the wind. Tightly-wrapped by a liquid-like skin, the teardrop cabin resembles a dark ice block and appears to erupt from the center of the muscular bodywork. Two prominent ripples flow along the hood into the disguised windshield pillars, as if barely able to contain a powerful structure underneath.

At the rear, the dark screen also bursts through the outer skin of the rear deck, The tapering form hints at the teardrop rear styling of Ursaab, while the ‘sawn off’, kamm tail echoes a form from Saab’s first coupé, the Sonett.

The low, frontal styling features a stretched interpretation of Saab’s signature three-port grille. A body-colored central wing is now dominant and, in keeping with the car’s minimalist design, LED headlamps are almost invisibly located at its tips. The new grille and hood forms are among the styling themes likely to be seen in future Saab production cars.

Butterfly-opening doors provide enhanced access to the low-slung cabin. There are no visible door handles or mirrors to disrupt airflow, and small cameras on slim stalks provide rearward vision.

Roof-mounted ‘winglets’ enable PhoeniX to cleave the air as efficiently as possible. They channel airflow from the side of the car and direct it across the rear deck, reducing lift forces for greater stability without increasing drag.

In true Scandinavian tradition, the 2+2 cabin adopts a clean, minimalist look. It has the ‘stripped out’ feel of a competition car, with shell-like seats and metalized interior sections that mimic the exposed network of a rollover cage.

Fresh expression is given to Saab’s traditional, driver-focused instrument layout. A circular pod in front of the driver, shaped like the afterburner of a jet engine, presents data in tandem with the head-up display.

Angled at 45º to the driver, a separate module accommodates Saab’s advanced IQon infotainment and communications system. For good ergonomics, the 8-inch touch-screen is as close to the driver’s finger tips as the steering wheel.

Saab IQon (see separate release for full details) is a ground-breaking car communications platform using Google’s AndroidTM operating system. Based on pioneering ‘open innovation’ with third-party service providers and applications developers, it comprises an embedded computer platform which seamlessly connects to the internet when the car’s ignition is switched on. The touch-screen provides access to audio and entertainment streaming, online navigation, on-board music storage and smartphone-like downloading of applications.

Red illumination for all instrument and ambient cabin lighting brings warmth and emotion to the cabin. This includes the floor, where LED light tubes are exposed by perforations in the black carpeting. It is all part of the new ‘aeromotional’ design strategy, incorporating ‘fire and ice’ effects.

The PhoeniX’s curvaceous rear deck disguises a deep-opening tailgate. It gives access to a flat cargo deck, including fold-flat rear seatbacks and a cargo track for adaptable load carrying.

The compact, all-aluminum gasoline engine packs 200 hp (147 kW) and includes variable valve timing and lift control, as well as start/stop functionality, minimal parasitic losses and a fuel cut-off function. A stainless steel tank is fitted, which is lighter and less expensive than a conventional plastic design.

The engine is supported by Saab’s innovative eXWD system. It comprises a rear drive unit housing a 25 kW (34 hp) electric motor/generator powered by a small battery pack. Regenerative braking is used to sustain the battery’s charge.

Now under development for the next generation of Saab cars, this hybrid propulsion system enables the benefits of all-wheel-drive while also reducing fuel consumption. Using a six-speed manual transmission, projected combined cycle fuel economy and CO2 emissions are just 5.0 l/100 km and 119 g/km.

The driver can select one of three eXWD operating modes. The default Eco mode delivers optimal fuel and CO2 efficiency with power assistance to reduce load on the gasoline engine at low speeds; Sport mode includes maximum power assistance with torque vectoring across the rear axle for greater chassis control; and Traction mode enables optimal grip at take-off and in slippery conditions.

Inside and out, the Saab PhoeniX showcases new design directions and technologies that will be part of forthcoming Saab products.