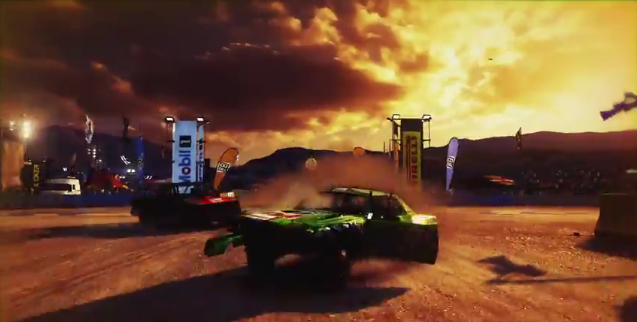 Colin McRae’s beloved racing series “Dirt,” is making a departure from its established formula in the form of Dirt Showdown. The previous installments have been based firmly in reality, with rally racing taking center stage, as it should given the Colin McRae legacy. The latest Dirt project is taking a step in a different direction, a more violent direction, and we’re okay with that.

Dirt has officially gone full contact; realistic rally simulation is going out the window in favor of destruction-based racing and regular old demolition derbies, but that’s not all. In addition to the racing and derby events, there’s an aptly named third category “Hoonigan” events. In Hoonigan events gamers are released into huge stunt parks for what sounds to us like an automotive enthusiast’s take on Tony Hawk.

The Dirt franchise has always had a little something to appeal to everyone, the racing engine in is beloved for drawing a good compromise between the believable physics of Gran Turismo and Forza, while still remaining accessible to fans of arcade style racers like Burnout. The cars walk a similar line between realistic and ridiculous; on the one hand you have faithfully recreated racecars like Ken Block’s own Fiesta from Gymkhana Four, on the other hand you have spray-painted hearses.

Dirt Showdown is set to release May 25 2012, for the PS3, Xbox 360, and PC. When it finally drops you’ll be able to experience eight-player online carnage with your friends and strangers, made all the better by the most advanced damage engine yet put in a video game. Check out the madness in the video below.

Rumors: Industry Report—Diesel Mini Coming To The US?