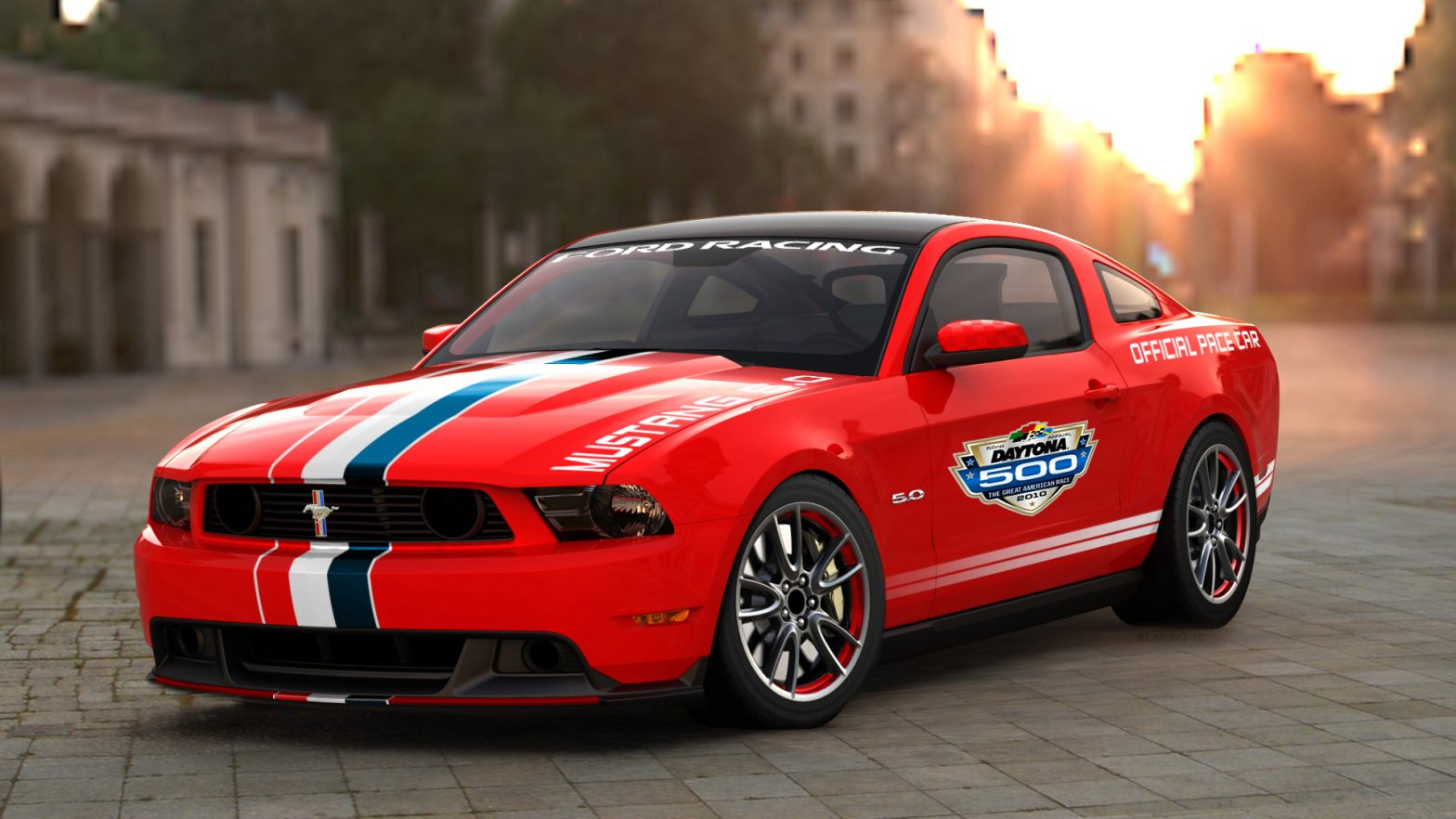 Today, ford announced that the 2011 Mustang GT will be the official pace car for the Daytona 500 next month, Nascar’s season opener. The car will be auctioned off prior to the race, on January 23, in order to raise money for the Juvenile Diabetes Research Foundation. The last Ford to be a pace car for Daytona was a Torino GT in 1970.

Besides the pace car to be used for the race and auctioned, Ford will build 50 special pace car editions of the Mustang GT to be sold to the public.
The 2011 Mustang GT feature’s Ford’s new 5.0-liter V-8 Engine, which produces 412 horsepower.
Scroll down to read the official press release.

2011 FORD MUSTANG GT NAMED DAYTONA 500 PACE CAR; FIRST FORD TO PACE DAYTONA 500 IN 40 YEARS
DEARBORN, Mich., Jan. 19, 2010 – For the first time ever, American’s favorite muscle car will pace ‘The Great American Race.’
For the first time in 40 years, a Ford Motor Company car will be pacing the field for the NASCAR season-opening Daytona 500 when the 2011 Mustang GT, powered by the all-new 5.0-liter V-8 engine, officially starts the race on Feb. 14 at Daytona International Speedway.
“Having the opportunity to pace America’s biggest auto race with a Ford icon like the 2011 Mustang GT is truly an honor,” said Jamie Allison, director, Ford North America Motorsports. “And to have the new 5.0-liter engine powering the car will be a great way to demonstrate its power and class-leading fuel economy.”
This latest version of Ford’s legendary muscle car will be a Race Red glass roof coupe with an all-new 5.0-liter V-8 engine capable of producing 412 horsepower, while delivering a class-leading 25 mpg on the highway.
The one-of-a-kind model will feature a special Daytona 500 paint scheme, Ford Racing suspension, strut tower brace and mufflers, unique painted wheels, and special interior treatment, including specially branded lit sill plates.
The 2011 Mustang GT Daytona 500 Pace Car model is one of only 50 special editions that will be built and sold to the public.
“Everybody loves Mustang,” Allison continued. “That was evident last year from the fan reaction when we announced it was going to be our new model in the NASCAR Nationwide Series starting later this year. This is just another way to showcase a true American icon in its most natural environment.”
The last time a Ford served as pace car for the Daytona 500 was 1970 when a Ford Torino GT convertible led the field to the green flag.
And while Mustang may be a rookie when it comes to pacing the Daytona 500, its 45-year history is firmly entrenched in racing and winning championships. Mustang captured championships last year in the Grand-Am KONI and SCCA SPEED World Challenge, in addition to leading Robert Hight to his first NHRA Funny Car championship.
Another element that makes this year’s pace car even more unique is that it will be auctioned off for charity before the actual race. Later this week (Jan. 23), the Mustang GT Daytona 500 Pace Car will be offered at the annual Barrett-Jackson Scottsdale Collector Car Auction, which is taking place in Scottsdale, Ariz. Seven-time Daytona 500 champion Richard Petty, the newest member of the Ford Racing family, will be on site to help hand over the car to the winning bidder.
All proceeds over the manufacturer’s suggested retail price from the pace car auction will go to help cure childhood diabetes through a donation to the Juvenile Diabetes Research Foundation.
About the 2011 Mustang GT
The new Mustang GT continues Ford’s powertrain offensive with an all-new 5.0-liter V-8, which uses advanced technology to deliver 412 horsepower and projected unsurpassed highway mileage of 25 mpg.
The 2011, Mustang GT adds specially tuned Electric Power Assist Steering (EPAS), 11.5-inch front and 11.8-inch rear vented disc brakes, and an enhanced suspension featuring an improved rear lower control arm and stiffened rear stabilizer bushings.
For enthusiasts, a Brembo brake package, with larger rotors and calipers from the Ford Shelby GT500® Mustang, unique 19-inch wheels and summer performance tires, is offered; new fender badges herald return of the 5.0-liter engine.
About Ford North America Motorsports
Ford North America Motorsports, based in Dearborn, Mich., is responsible for major racing operations in North America, including NASCAR (Sprint Cup, Nationwide Series, Camping World Trucks), Grand American sports car racing, NHRA drag racing, Rally America and the Ford Racing Mustang Challenge for the Miller Cup. The department also oversees the development and marketing of Ford Racing Engines and Performance Parts, the outreach programs with all Ford Clubs and Ford enthusiasts, and the marketing of the Ford Racing brand through initiatives such as Team Ford Racing. For more information regarding Ford Racing’s activities, please visit www.fordracing.com.
Tags:
FordMustang