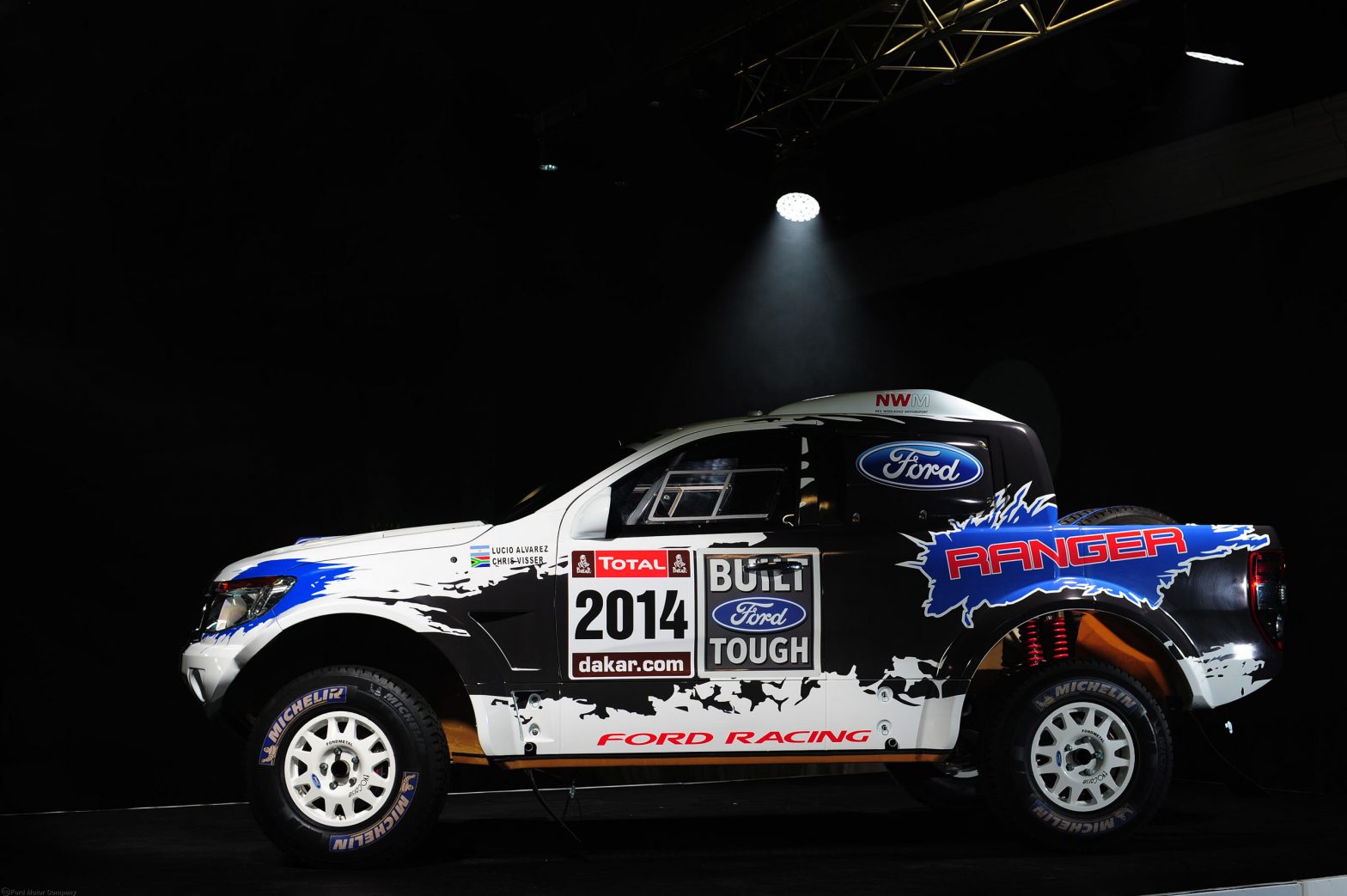 Ford has announced it will compete in the 2014 Dakar rally with two purpose-built Ford Ranger trucks.
Built in South Africa and prepped by Neil Woolridge Motorsport with support from SVT, the two trucks will be shipped to South America for the race through Argentina, Bolivia, and Chile from January 5 through 18, 2014.

The Ford Ranger pickups (remember when we could buy those in America?) will each employ an aluminum 5.0-liter V-8 engine providing 348 horsepower and 413 pound-feet of torque. The power is put to all four wheels via a Sadev six-speed sequential gearbox. Top speed is 105 miles per hour, which should be more than enough to take on the treacherous terrain of the Dakar rally.
Scroll down for more details in the press release, below.

Ford Confirms Participation in 2014 Dakar
PRETORIA, South Africa, 29 July, 2013 – Team Ford Racing has confirmed it will enter two South African-built Ford Rangers in the gruelling 2014 Dakar, taking place from 05 – 18 January 2014 in South America.
The design team responsible for bringing Ford’s Dakar contender to fruition includes a mix of South African and global minds. The purpose-built Ford Rangers are being prepared by Pietermaritzburg-based Neil Woolridge Motorsport while logistics will be handled by German-based South Racing. Similarly the driver line-up is made up of both international and local contenders including South American native Lucio Alvarez and South African Chris Visser.
“We are extremely proud to be sending these South African-built Rangers to the 2014 Dakar,” says Jeff Nemeth President and CEO of Ford Motor Company of Southern Africa. “Dakar is the ultimate test of man and machine and we are thrilled to have the opportunity to participate with a phenomenal team comprised of local and global expertise.”
Over 1-billion TV viewers from across the globe tuned in to watch the 2013 Dakar with 4.6 million spectators making their way to South America to witness the feat.
“The Dakar is a truly international showcase of Off Road machinery. Last year 745 competitors participated, representing 53 nationalities. We are pleased to have put together a global team that represents exceptional knowledge of the event as well as the Ford Ranger, which is built at the Silverton Assembly Plant in Silverton” says Dave Schoch Group Vice President and President, Asia Pacific.
Global collaboration
The newly designed Ford Rangers were built in Pietermaritzburg with assistance from Ford Motor Company’s Global Product Developments division. Every aspect of the new Ranger has been carefully considered and built with precision and performance in mind.
“A complex jigging system was used in the manufacturing process in order to ensure that each part is built as per the design in order to achieve the perfect fit on every vehicle built” explains Neil Woolridge, Team Manager. “Although the two new Rangers are locally built we received tremendous support from our global counterparts including the likes of Ford’s SVT division.”
The technical aspects of the project will be managed from the NWM workshops in Pietermaritzburg and this will continue to be the main headquarters for the project. One of the two FIA Ford Rangers is already complete and will start testing this August. The second is under construction with planned completion at the end of October. They will be supported by a dedicated team of 24 full time staff in their quest for the top honours in the Dakar battle.
The logistics and European operations are being managed by South Racing GmbH, based near Frankfurt, Germany. South Racing is owned and managed by Scott Abraham whose family has a long history in South African motorsport, his father Arthur was a stalwart of South African motorsport for several decades. Abraham has been based in Europe for the past ten years during which time he has worked as team manager for X-raid BMW/MINI and Overdrive Toyota. He was integral to the launch of the Toyota Dakar project and thus has a wealth of relevant knowledge and experience.
South Racing will be supplying the team logistic structure including the MAN 6X6 Service Trucks, MAN T4 Race Trucks and service equipment. In addition to the vehicles and equipment South Racing will manage all logistic and administration requirements for the team including the relationship with ASO.
“The combination of NWM and South Racing will ensure that the project has the necessary expertise and depth to be able to deliver the results,” explains Abraham.
Competitive driver and navigator line-up
Lucio Alvarez and Ronnie Graue have been confirmed as the first driver crew. They are part of the younger generation of drivers coming through the sport and have delivered impressive results on previous runnings of the Dakar. In their first outing in 2011 they finished 17th overall, in 2012 they managed to finish in an impressive fifth place while in 2013 they were lying third overall before mechanical problems dropped them down to 27th place. They demonstrated their determination and abilities by fighting their way back up to tenth position at the finish.
The second Ford Ranger will be crewed by South African Cross Country competitors Chris Visser and navigator Japie Badenhorst. Both are well known in South African motorsport having won the 2011 South African Cross Country Championship. The pair is currently leading the 2013 Donaldson South Africa National Cross-country championship. This will be their first time competing on the Dakar.
Gruelling test of man and machine
The 2014 Dakar Rally will be the 35th running of the event and the sixth successive running in South America.
The 2014 Dakar Rally Route is sure to be as trying as ever. The event will start in Rosario, Argentina on January 5 and finish in Valparaiso, Chile on January 18 after thirteen stages of competition, which will comprise a total distance of over 8,500 kilometres.
This year the Dakar Rally is continuing its exploration of the Andes regions by incorporating a visit to Bolivia for the first time. No doubt that this challenging stage will test the off-road endurance qualities of the drivers and teams.
“There is much work to be done in the coming months. The Dakar is no small under taking but we have an exceptional team of hardworking and dedicated individuals who will be working round the clock in the coming months in preparation for the start of the Dakar early in the new year,” concludes Schoch.
Ford fans will be able to keep track of the team’s progress in the lead up to the event as well as follow the teams’ progress during the 2014 Dakar on Ford South Africa’s Facebook, Twitter and Instagram accounts, join the conversation by using #FordDakar.
VEHICLE TECHNICAL SPECIFICATION – Ford Ranger
Tags:
ArgentinaBoliviaChileDakarFord Motor CompanyFord RangerFord South AfricaSouth America