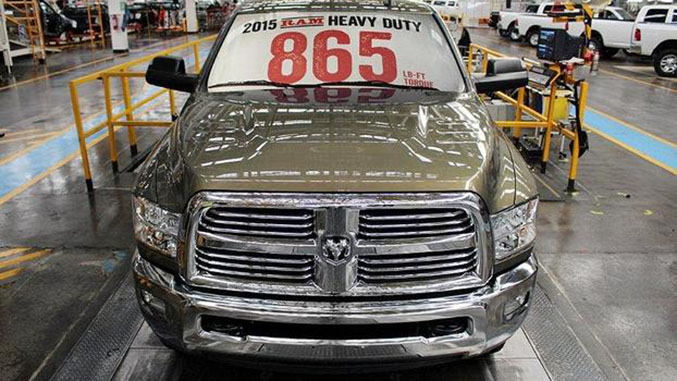 Just as the horsepower rivalry between the Big Three has spawned increasingly more capable sports cars and muscle cars, the war to claim the top spot in the world of pickups has evolved into a tit for tat battle of one-upmanship. While horsepower is the measurement that go-fast fanatics salivate over, in the realm of trucks, it’s torque that dictates who’s the king of hill in terms of capability. Over the course of the last few days, both Ford and Chrysler have traded blows that have caused the crown bounce back and forth across Detroit this month. But regardless of where it lands, it spells good news for consumers.
Case in point: On Friday, Ford announced that the 6.7-liter diesel Power Stroke V8 in the new 2015 Super Duty F-Series trucks generates a best-in-class 440 horsepower and 860 lb-ft of torque, up from 400hp and 800 lb-ft from the motor used in the outgoing Super Duty trucks.
Refusing to be outdone by the Blue Oval team, Chrysler fired back with their own press release this week. Mopar proclaimed that their own line of Ram Heavy Duty pickups would offer the most torque for 2015, as revised calibration of the Cummins 6.7-liter mill meant that the motor now boasts 865 lb-ft of torque, up 15 pounds-feet from last year’s model and edging out Ford’s rating by a scant 5 lb-ft.
Bob Hegbloom, the new head of the Ram brand for Chrysler Group, said in the statement that "Ram owns best-in-class attributes in the areas that are most important to truck customers."
Chrysler also offered a few more statistics to sweeten the deal, including a particularly crushing blow with the announcement that the 2015 Ram 3500 will offer up to 30,000 pounds of SAE J2807-spec. towing capacity, which trumps the Ram’s closest competitor by nearly 1.5 tons. Payload capacity (the amount of cargo which can be hauled in the bed of the truck) of the gasoline Hemi-powered has also been increased on the Ram 3500 to 7,390 pounds, which Chrysler also claims is best in class. It’s worth noting that Chrysler was a little less forthright with the Cummins’ horsepower rating, which falls short of Ford’s top offering by 55hp at 385.

Meanwhile, GM trails the other two with a "measly" 765 pounds-feet of torque on tap in the Duramax-equipped heavy-duty Chevrolet Silverado and GMC Sierra trucks.
But torque isn’t the only battleground for pickups right now, as fuel economy is becoming an increasing concern for truck buyers as well. To that end, Ram goes in to 2015 sporting the industry’s two most fuel-efficient pickups with the gasoline-powered Ram 1500 HFE at 25 mpg highway, and the Ram 1500 Ecodiesel with an industry topping 28 mpg highway rating. Meanwhile, Ford is preparing a fuel-conscious F-150 SFE model that is scheduled to debut late this year.
Regardless of the metric you use, the war for truck consumers’ hearts and minds continues to rage at full steam and victors here, in reality, are the potential buyers of any of these extremely capable haulers.
Tags:
ChryslerFordRam

Update: Honda CR-Z Gets a Shot in the Arm with HPD Supercharger