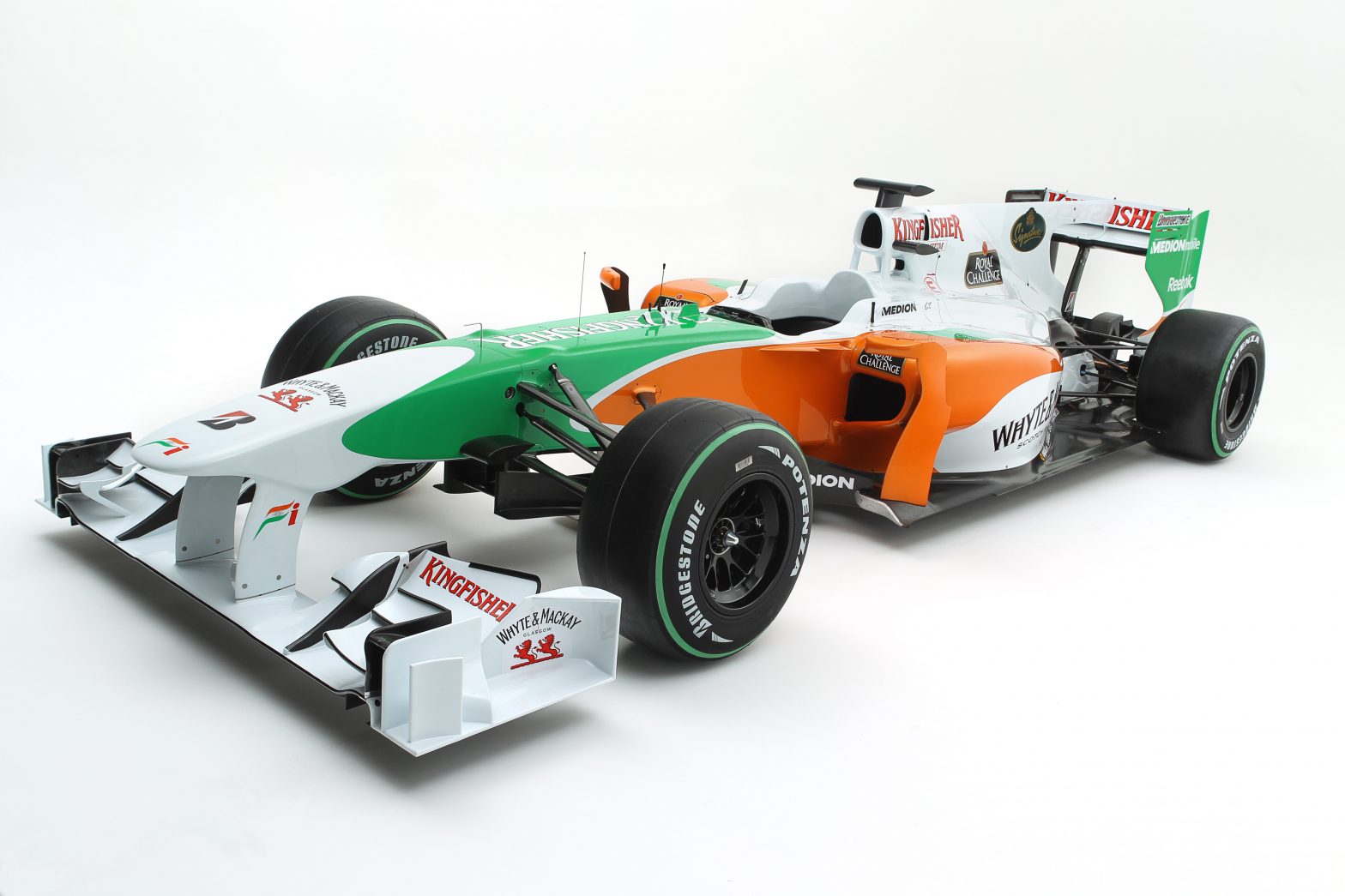 Force India unveiled its car for the 2010 Formula 1 season, the VJM03.

The team was a newcomer in 2008, and has only scored two finishes on the podium, but force India hopes to take themselves further this year with the new car. Because of regulation changes, and from learning from last season, the VJM03 differs from its predecessor, the VJM02, in several ways. A larger gas tank was needed to compensate for the refueling ban. The VJM03 also has narrower tires and revised aerodynamics.
The VJM03 is powered by a Mercedes-Benz engine, and is piloted by Adrian Sutil and Tonio Liuzzi, with Paul di Resta acting as test and reserve driver.
See the VJM03 in the photo gallery, or scroll down for the press release from Force India.
Introducing the VJM03
The Force India Formula One Team finished the 2009 season as a genuine regular contender for points and the new 2010 challenger, the VJM03, builds on the solid foundations established by its predecessor, which took pole for the Belgian GP. With driver consistency in Adrian Sutil and Tonio Liuzzi and the able support of Paul di Resta in the test and reserve driver role, this year the team is looking forward to a strong performance right from the start of the year.
‘Our goal is to continue on the same path of performance improvement that we had at the end of 2009,’ says chairman and team principal Dr Vijay Mallya. ‘I don’t think I am being over-proud when I say 2009 was an exceptional year for us. The bare statistics say it all: one podium, one pole position, one fastest lap, a further five top 10 starts and 13 points. We’ve learnt from our experiences and we’ve come out a better team: resilient, resourceful and now resurgent. I hope 2010 will see this great progress carrying forward. We’ve got one podium so far but I would hope that, this time next year, I’m talking about more points and more podiums. I’m confident we can get this, why not aim high?’
While the VJM03 is an evolution of last year’s strong car, it incorporates the package of rules changes introduced for this year, including the requirement for a larger fuel tank as a result of the refuelling ban and a switch to narrower front tyres.
Design director Mark Smith explains,  ‘The VJM03 is definitely an evolution of the VJM02 in terms of the design philosophies we have developed at Force India over the last year. We are very happy with the direction, therefore we have opted to evolve the car rather than significantly revise.
‘Obviously one of the major aspects we have had to contend with are regulation changes which have had a considerable impact on some aspects of the design of the car. The removal of refuelling from races increases the amount of fuel needed to be stored in the cars – almost twice the amount we ran in 2009. There is a compromise now: either make the car much longer or wider, or, as we have done, a combination of both. This of course has influenced the mechanical design solutions and also the aerodynamics, specifically with respects to the diffuser and bodywork.
‘Even with the ban of double diffusers for 2011, we recognise that we still have to push as much as we possibly can in this area in 2010 as we have targets to meet and the double diffuser is a key development aspect of the car.’
Last year’s VJM02 was noticeably quicker on the low downforce circuits, however Mark is confident that this year the VJM03 will be strong across the board: ‘The VJM02 was a relatively low drag car that showed well on the low downforce tracks. As was demonstrated throughout 2009, that was a useful attribute but as we go into 2010 we have tried to maintain a high level of aerodynamic efficiency, but we recognise that our championship position will be enhanced by a general level of performance that is suited to all types of circuits. We have, we believe, quite an efficient car overall.’
Adrian Sutil is eagerly anticipating the start of the season, ‘2010 is a really important season and we are very optimistic about going well. I think this year it’s important to be consistent from the first race. I’d like to be in the midfield and be competitive from Bahrain. It’s the first time we have been completely on schedule so I feel this will be the first season when I can show from the beginning to the end what is possible with the car and what I can do. Of course we will have updates and performance packages from this point on but I hope we will be strong from the first practice session rather than compromising at the start.’
Meanwhile Tonio Liuzzi is also going to the season with a strong goal, ‘After one and a half years in a test role, I feel really prepared, both physically and mentally for a full race season. My objective is to be as strong and consistent as possible and give good feedback to the team to help them improve. For sure scoring points as many times as I can is going to be the key and you never know, perhaps we can get something more as well if everything comes together.’
The VJM03 will make its official testing debut on 10 February at the Jerez circuit in Spain. Tonio Liuzzi will be on driving duties for the first two days before Adrian Sutil takes over on 12 February for a further two days. Paul di Resta will step into the car on 17 February in Jerez.
Tags:
Formula 1