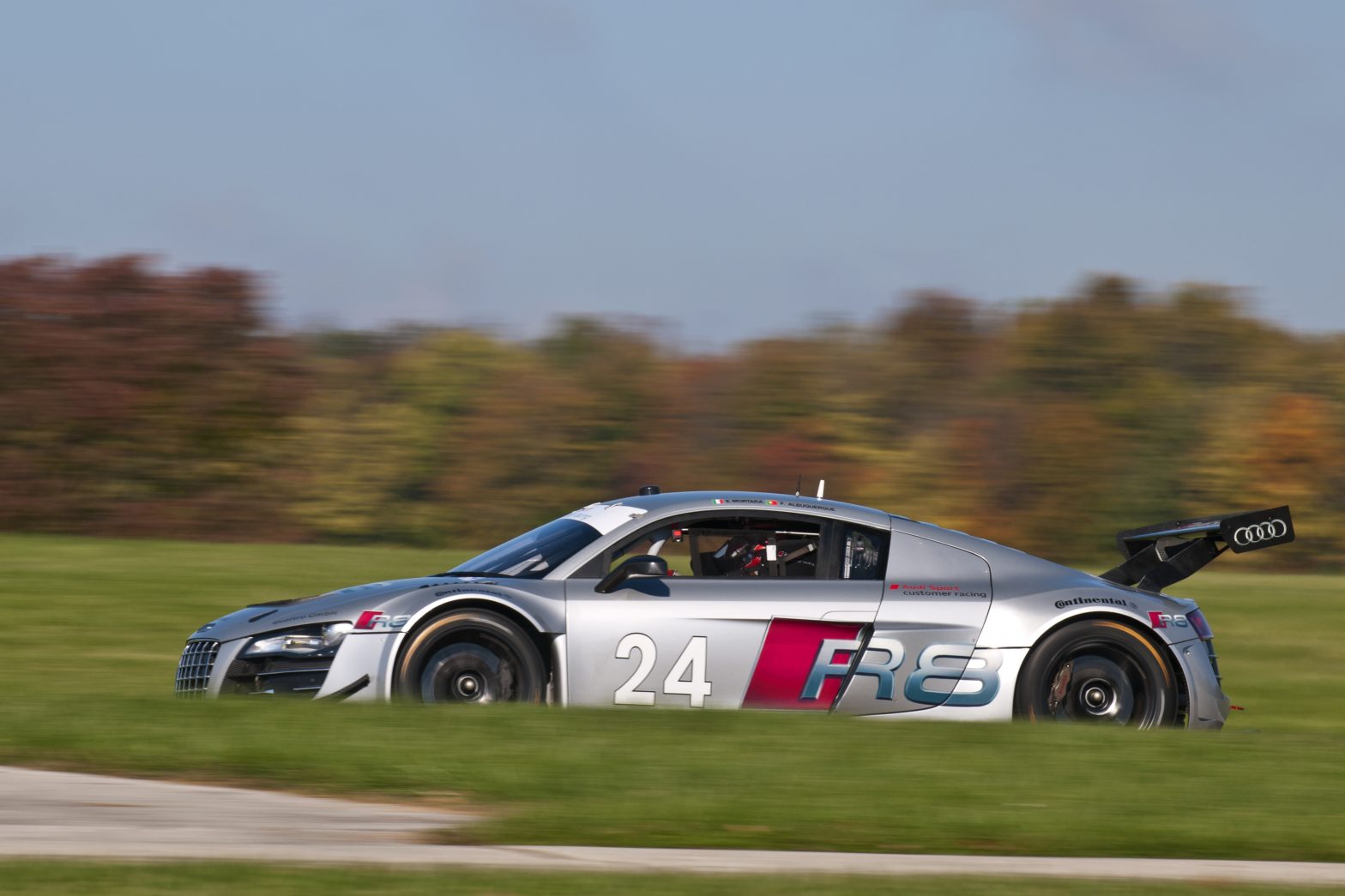 Flying Lizard Motorsports, one of the teams to compete in the 2014 Tudor United SportsCar Championship (a replacement to the ALMS and Grand-Am series), has announced that it will be using two Audi R8 LMS racecars in its fight for the GTF-Class title.
The Audi R8 LMS is powered by a naturally aspirated 5.2-liter V-10, and shares more than 50 percent of its parts with the Audi R8 street car. It also reaches its first service interval after a full 12,000 racing miles, which speaks to the car’s chops as an endurance racer.

Audi Of America President Scott Keogh said of the partnership, “We are excited to welcome such a successful organization in Flying Lizard to our customer racing efforts. They share a great passion to compete on the track and have proven that they are a winning organization. We look forward to supporting them and our other teams in their race efforts.”
Flying Lizard begins testing for the 2014 season on November 16. The Flying Lizard Audi R8 LMS cars will see their competitive debut at the Rolex 24 At Daytona on January 25.
Have a look at the Audi R8 LMS in the attached photo gallery. Scroll down for more details in the press release, below.

The partnership between Audi and Flying Lizard Motorsports represents two brands that have had great success racing over the years and have proven the ability to win at the highest level of motorsports. The Audi R8 LMS has had great success around the globe in many of the most important endurance races including winning the Daytona 24 Hour race earlier this year as part of the final GRAND-AM season. With three team championships as well as three driver championships during ten years of racing in ALMS, Flying Lizard is a professional race organization that knows how to win. Flying Lizard Motorsports has also competed at the Le Mans 24 Hour race multiple times and is no stranger to endurance racing.

“We are excited to welcome such a successful organization in Flying Lizard to our customer racing efforts. They share a great passion to compete on the track and have proven that they are a winning organization. We look forward to supporting them and our other teams in their race efforts”, said Scott Keogh, President, Audi of America.

The Audi R8 LMS race car shares more than 50% of its parts with the Audi R8 street car including the naturally aspirated V10 5.2 Liter engine, the Audi Space Frame and a variety of other components. Having won all of the major 24 hour races around the world, owners of the Audi R8 street car can be confident in its race-tested performance and durability. Of great benefit to the race teams is the first service interval at 12,000 miles under race conditions which translates into lower operating costs.

While testing will commence in Sebring on November 16th, the first race for both of the Flying Lizard Audi R8 LMS cars will be at the Rolex 24 at Daytona on January 25, 2014.