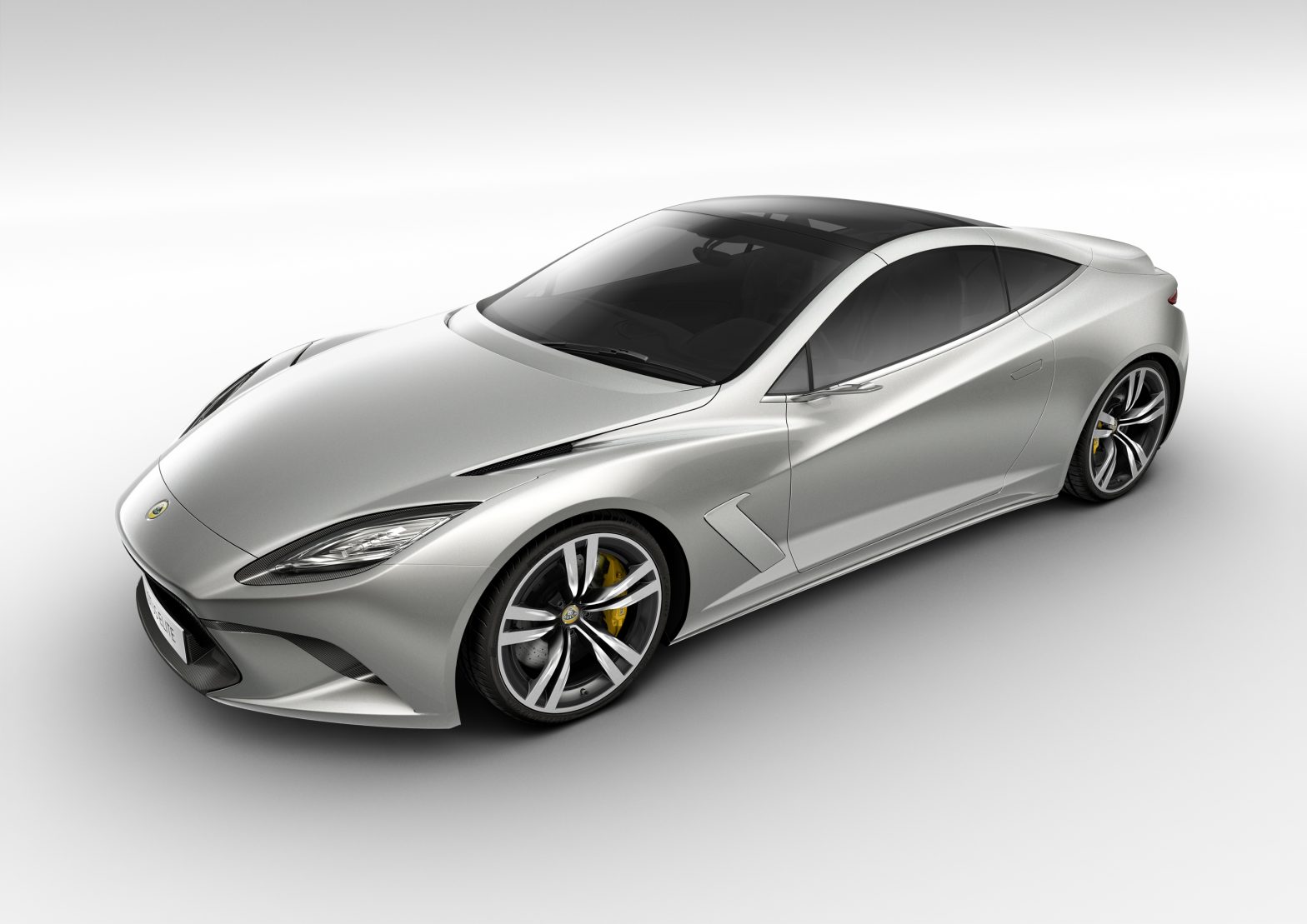 Over the weekend, Lotus gave a preview of the Paris Motor Show unveiling of the Lotus Elite. Reviving the old name, the Elite is a 2+2 that is an interesting upmarket addition to the brand’s lineup.

A hybrid version will also be available, using KERS technology. Lotus hasn’t yet gone into great detail about the particular system to be used in the Elite—how much kinetic energy it will store, how it will be activated by the driver, how long it will last, and how much added thrust it will produce—but just knowing it’s on the menu is enough to keep us eagerly awaiting the Paris debut.

In addition, a retractable hardtop version of the Lotus Elite will be available.

Priced near the current equivalent of $179,000, the Elite is a big upmarket move for the Lotus brand into the realm of larger, more luxurious Grand Touring cars.

Scroll down for more details in the press release. The official debut is on Thursday, September 30.

The Lotus Elite
….enjoy the new British Expression of Exclusivity

Ten days ahead of the official unveil at the Paris Motor Show the sun starts to rise for the dawn of Lotus’ new era – the Elite will redefine “modern classic".

So here it is, the Lotus Elite, the first taste of what’s to come from Lotus in the future. Look up elegant in the dictionary and you’ll find variations on the following 1. dignified grace in appearance, movement, or behaviour, 2. superb taste in design, style and 3. something elegant; the ultimate refinement.

The ground-breaking new Elite is exactly that. It’s compact yet chic body is elegance incarnate. It’s not only exquisitely elegant, in keeping with Lotus’ core values, it’s a car of substance incorporating some of the very latest technological innovations Lotus has to offer. The slick retractable hard top version and the optional use of hybrid technology with KERS are typical examples of Lotus tailoring technology to deliver perfect performance.

Dany Bahar, CEO of Group Lotus said: “There’s no denying that the Elite is breathtakingly beautiful to look at but it’s so much more than that, it’s a car that over delivers in all other aspects as well. One could say it’s a car of perfect contradictions, it’s compact yet spacious, high performing yet low emitting, lightweight yet still reassuringly solid. It’s a car that we are exceptionally proud of at Lotus and we truly believe that there is nothing else like it out there both in terms of styling and performance.

“Make no mistake, there’s a definite market requirement for the Elite – it’s the ultimate sports car feel with comfort and space. There will always be those who believe that Lotus should stick to small sports cars but we didn’t take the decision to design something like the Elite lightly, it’s based on months of careful research and planning. It’s worth noting this sector has been very successful for us in the past and now the Elite raises the benchmark higher still.”

Set for release in spring 2014, this is an innovative, exciting GT that will set a new benchmark in design, performance and emissions. And it’s not all about sleek lines and stunning bodywork with this particular 2+2, what hides beneath this shark like exterior perfectly does the aesthetics justice. A front-mid positioned 5.0l V8 engine delivering up to 620 PS meaning drivers can expect to go from 0-100 km/h in approximately 3.5 to 3.7 seconds.

* Whilst the vehicle shown in this release is a Production Intent Prototype, it represents a concept vehicle being designed and developed by Lotus Cars. Lotus Cars reserves the right to change the external and internal design of the Production Intent Prototypes, the specification, performance, dimensions, weight, fuel consumption, powertrain details and any other product information at anytime and without notice for any reason whatsoever.

The design, specification and performance figures for all Production Intent Prototypes will be confirmed following official testing and will be available from Lotus Cars.

The main operating subsidiary of Group Lotus plc is Lotus Cars Ltd, which has two operating divisions – Lotus Engineering and Lotus Cars. Lotus Engineering is an internationally recognised automotive engineering consultancy based in Norfolk, UK. Global facilities include those in Michigan (USA), Kuala Lumpur (Malaysia), China and offices in Germany and Japan, with rapid expansion in new territories such as South East Asia.

Lotus Engineering provides comprehensive and versatile consultancy services to many of the world’s OEMs and Tier 1 suppliers, offering a full engineering service from initial concept and project design through development and integration of the complete vehicle to meet all worldwide markets and customers to full production. This includes third party ‘niche vehicle’ engineering and manufacture worldwide .

Lotus Cars builds world class, prestige, high performance sports cars for sale in 37 countries. These include the iconic Lotus Elise, the Exige, the 2-Eleven and Lotus’ latest model, the Lotus Evora. Lotus is a global high-tech company, expanding rapidly and committed to driving forward technology for both Lotus Cars and its Engineering clients, spearheading research into such areas as hybrids, electric vehicles and renewable fuels.