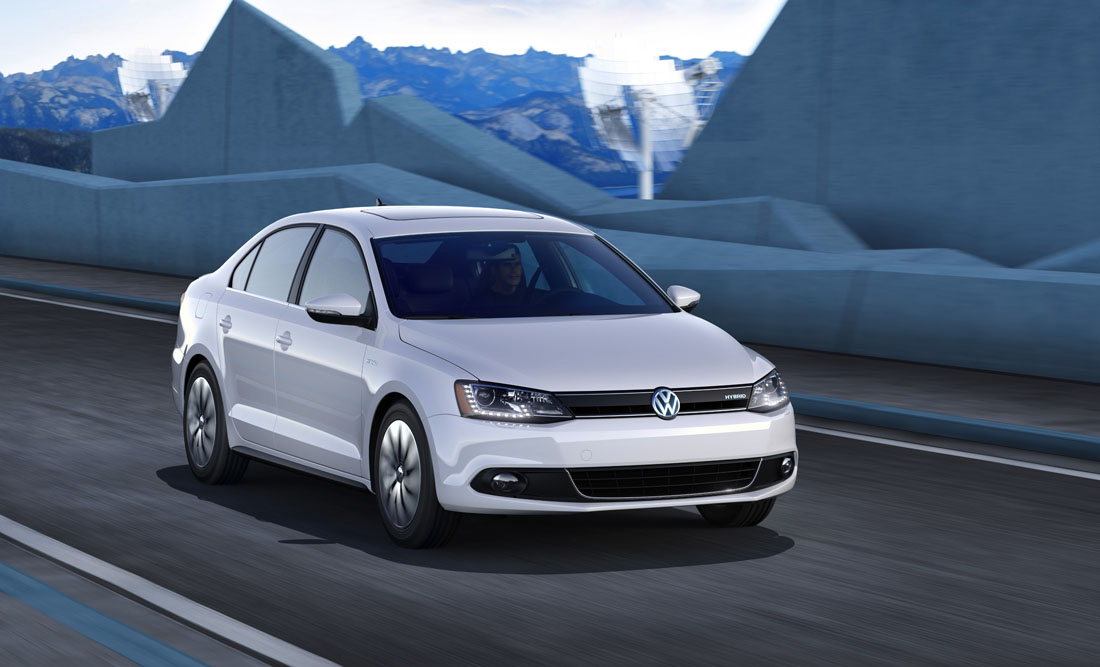 Volkswagen wasn’t only about strangely named concept cars at this year’s Detroit show, the German company also showed its 2013 Jetta Hybrid—a compact sedan that is firmly rooted in reality.

The Jetta will be powered by a 1.4-liter turbo four-cylinder engine, mated to a 20 kW electric motor, and will offer a combined peak output of 170 horsepower. VW claims that will be enough juice to give the car a class-leading 0-60 time (under nine seconds), as well as a combined fuel economy figure of 45 miles per gallon. The Jetta will also feature a fully electric mode, that can power the car of speeds up to 44 miles per hour.

Further differentiating the Jetta from the hybrid herd is a seven-speed dual-clutch automatic transmission. The DSG, along with the engine and battery system, is very compact and lightweight, too, so much so that the hybrid Jetta weighs just 221 pounds more than the standard car.

Expect to see the Jetta Hybrid on sale in the last part of 2012. Volkswagen in claiming “competitive” pricing for the car, but hasn’t dropped any official figures as of this writing.

Please read on for the full Volkswagen press release.

The new Jetta Hybrid offers the best of all worlds, marrying performance and engaging handling with miserly combined fuel economy

• Most fuel-efficient Jetta in the lineup

• Fastest compact hybrid in-class with an estimated 0-60 mph in less than 9.0 seconds

• Competitively priced with other compact hybrids

Wolfsburg/Herndon, VA – Volkswagen is presenting one of the world‟s most efficient automobiles at the North American International Auto Show in Detroit: the Jetta Hybrid.

Powering the all-new model is a high-tech turbocharged gasoline engine mated to a zero- emissions electric motor. While this hybrid union enables impressive driving performance with a class-leading 0-60 mph time of less than 9.0 seconds, the new Jetta Hybrid also delivers an estimated combined fuel economy figure of 45 mpg. This means that the sporty hybrid consumes about 20 percent less fuel than a similarly-powered sedan with a conventional drivetrain. In city traffic, the fuel economy advantage climbs to a little over 30 percent. In addition, the Jetta Hybrid can be driven in pure electric mode at speeds of up to 44 mph and for up to 1.2 miles depending on operating conditions.

Proven on the Autobahn
For the first time in the U.S. market, Volkswagen is using its acclaimed 1.4-liter turbocharged gasoline powerplant, which weighs just 216 pounds. The downsized four-cylinder engine develops 150 horsepower and 184 pound-feet of torque delivered from just 1400 rpm up to 3500 rpm. Combined with the 20 kW (27 hp) electric motor, the system ensures that the new Jetta Hybrid is a genuinely sporty vehicle.

High-Tech Alliance
As in the Touareg Hybrid SUV, the Jetta Hybrid features a clutch that decouples the gasoline engine from the drivetrain when in pure electric drive or coasting modes.

State-of-the-art battery: A lithium-ion battery supplies the energy to the electric motor. The compact 220-volt, 1.1 kWh battery is integrated behind the rear bench seat and weighs less than 80 lb. The battery consists of 60 individual cells with a combined energy capacity of 5 Ah. The frequency of the discharge and charge cycles in hybrid operation requires high- performance battery cooling, which is handled by a fan mounted directly on the device. The battery also has its own management system that performs safety, diagnostic, and monitoring functions as well as temperature management. The battery is disconnected when it‟s not in use or if the car is involved in a collision.

Efficient dual-clutch transmission: Power is taken to the front wheels via a seven-speed DSG® dual-clutch transmission that operates automatically and efficiently, as well as providing super-fast shifting. Downsizing was achieved here, too: at 163 lb, the DSG transmission weighs significantly less than a conventional automatic and is also much more compact in its construction. Thanks to its lightweight drive components, the weight of the Jetta Hybrid was only increased by 221 lb despite the addition of a battery system. The car weighs in at less than 3310 lb, which is low for a hybrid vehicle.

Regenerative braking, with a wrinkle: Like other hybrid vehicles, the Jetta Hybrid uses regenerative braking, feeding kinetic energy into the battery to be stored as electrical energy that can be used in the electric drive mode or for boosting the powertrain‟s overall performance. In the Jetta Hybrid, this is achieved more efficiently because when the driver releases the gas pedal prior to braking, the decoupling clutch disengages the engine. When the driver begins to slow down the car, all the retardation is done by the brakes rather than a combination of the brakes, drivetrain drag, and engine torque. This means that more kinetic energy is released back into the battery.

Stop and Go: The gasoline engine is stopped as soon as the car comes to a halt in city driving or stop-and-go traffic, provided that the driver presses the brake pedal and that the battery is sufficiently charged. However, the heating and air conditioning and electrically operated comfort and convenience features, such as the audio system, continue to operate. Unlike conventional hybrid systems, when the Jetta Hybrid‟s gasoline engine is stopped, the engine is disengaged via the decoupling clutch to give a pure electric drive mode when the car moves off again-provided that the battery is sufficiently charged.

‘Coasting’ without the engine: As soon as the driver releases the accelerator pedal at speeds of up to 84 mph, the TSI® engine shuts down and is decoupled from the drivetrain to eliminate driveline drag and the effects of the engine‟s torque. This results in further fuel savings.

A Hybrid with Verve
With the lever in the "S" position or in the manual shift gate, the drive system reacts to heavy throttle inputs by applying the maximum amount of propulsive power. The same applies when the driver kicks down. In these situations, the power of the electric motor and the gasoline engine combine to provide the peak output of 170 hp.

On spirited drives or when battery capacity is low, the Jetta Hybrid is powered by just the TSI engine. In certain situations, the operation of the TSI engine is also optimized for efficiency. Excess power from the engine can be used to charge the high-voltage battery via the electric motor, which acts as a generator in this case. These so-called active charging phases are interspersed with electric driving phases to realize the optimal fuel economy.

Comprehensive Information, Greater Sustainability
All relevant hybrid drivetrain information can be displayed within the multifunctional digital display on the Jetta Hybrid‟s instrument cluster. Under the „Hybrid‟ menu, the active drive mode is displayed in an energy flow diagram, and the direction of energy flow is visualized in the form of arrows. The battery charge state is shown on the same screen. Directly below the energy flow diagram is what is known as the ePower meter. This indicates the relative power of the electric motor. The ePower meter is only active in "electric driving," E-mode,TM and "Boost" operating modes.

The Power meter-an additional multifunctional display that replaces the tach on the left side of the instrument cluster-informs the driver of the momentary operating state of the Jetta Hybrid. These states are: a general readiness to drive ("Ready"); battery regeneration ("Charge"); eco-conscious driving mode ("Eco"); boosting ("Boost"); or driving only with the TSI internal combustion engine ("Off"). Electric operation, whether selected automatically or manually by the driver, is also indicated in the instruments (E-mode).

The audio system‟s display also plays a role in informing the driver of what‟s happening. When the goal is maximum economy, the audio display‟s „Zero emissions‟ menu offers a graphic of the car‟s zero emissions driving time. The zero emissions values are shown in the form of percentages in a bar diagram, where the measurement interval of one bar represents one minute of driving. A value of 100 percent means that the car was driven with zero emissions throughout the driving minute, i.e., with the TSI engine shut off. The effective time period for this is 30 minutes.

Efficiency in Design
Visually the Jetta Hybrid is distinguished by aerodynamic modifications that include a new front airdam, a rear diffuser, and an integrated rear spoiler. As a result, the Hybrid‟s Cd is 10 percent lower than that of the stock Jetta. In addition, the Jetta Hybrid is equipped with special 15-inch alloy wheels with all-season tires optimized for low rolling resistance. Other distinguishing features include a special radiator grille where the VW logo is integrated on a blue background for the first time. The new model is also identified by Hybrid signatures on the grille, front fenders, and rear deck.

The Jetta Hybrid is the quietest car Volkswagen has even produced in the compact sedan class, thanks to a newly designed exhaust system, an acoustically optimized windshield, and thicker front side windows.

Three trims will be offered for the Jetta Hybrid. Standard features include Bluetooth® technology, LED taillights, SiriusXM® satellite radio, special 15-inch aluminum-alloy wheels, and a unique Hybrid body kit and badging. More details on trim levels will be released at a later date.

Jetta Hybrid launches in North America in 2012
The introduction of the Jetta Hybrid marks the second gasoline-electric hybrid offering by Volkswagen. The sedan, which is as sporty as it is eco-conscious, is equipped with the most advanced technology and engineering of any car Volkswagen has ever offered in this class. The 2013 Jetta Hybrid will launch in the North American market at the end of 2012.
About Volkswagen of America, Inc.

Detroit 2012: Live Images Of The 2013 Honda Accord Coupe Concept