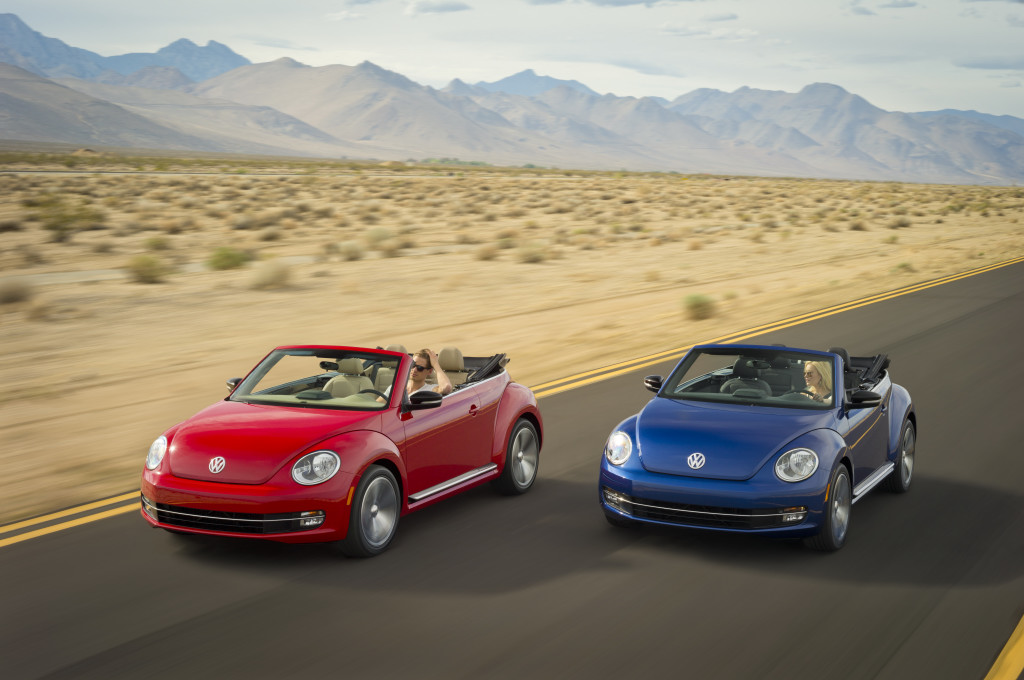 Volkswagen’s taken the wraps off of the third-generation Beetle convertible, ahead of its public debut at the 2012 Los Angeles Auto Show.
Powertrains are pretty much the same, with a base 2.5-liter five-pot producing 170 horsepower and 177 pound-feet of torque. At the top of the petrol-engine range is the venerable 2.0-liter turbocharged four-cylinder made famous in the VW GTI. It packs 200 horsepower and 207 pound-feet of torque. Finally, the 2.0-liter TDI oil-burner can be had ith 140 horsepower and 236 pound-feet of torque. Both 2.0-liters can be had with either a six-speed auto or manual, while 2.5-liter buyers will be relegated to a six-speed automatic.
As for that fancy piece of fabric separating the cabin from the sky, it’ll stow itself in just over ten seconds. Interestingly, the top looks to stow deeper in the back. Considering the visibility problems suffered by the last Beetle Convertible’s stowed top, we can only hope this model is better.
Pricing for the droptop Bug will be announced closer to its launch at the end of 2012.
Please scroll down for the official press release from Volkswagen.
10.03.2012
VOLKSWAGEN UNVEILS THE NEW BEETLE CONVERTIBLE
Volkswagen reveals images of the latest version of its iconic convertible ahead of the 2012 Los Angeles Auto Show
Herndon, VA –  Today, Volkswagen unveils the latest Beetle Convertible, the third-generation of the iconic VW ragtop. Like its predecessors—the type 15 from 1949 and the 2003 New Beetle Convertible—the curvaceous convertible offers the perfect combination of practicality and fun for four.
In creating the latest version of the Beetle Convertible, Volkswagen has reinterpreted the Beetle Convertible’s timeless design with a sportier and more dynamic silhouette, just as it did with the latest Beetle coupe. The combination of a flatter roofline and a more upright windshield gives the car a shape that’s more closely aligned with the first generation of Beetle convertibles.
Volkswagen decided to stick with a traditional soft-top rather than incorporate a folding hardtop on the car. When the top is down, it lies flat, giving good rear visibility. Although the top looks compact when furled, it’s actually wide and long when in place, an action that takes a little over 10 seconds at the touch of a button.
Inside, the Beetle Convertible retains the design cues that have made the latest Beetle such a hit with consumers, such as the body-color dashboard and the stylish gauges and trim. The spacious cabin has space for four full-size adults and is able to carry plenty of luggage: a fold-down split rear bench seat increases the practicality even further.
In any Volkswagen, safety is paramount and to that end, the company has developed an Automatic Rollover Support System. Two roll-over bars are concealed behind the back of the rear bench seat, activated by the computer that deploys the airbags in the case of a crash.
Along with the fixed A-pillars, they provide effective protection for the occupants of all four seats within milliseconds. Driver and front passenger combined head-thorax airbags are also among the standard equipment.
The new Beetle Convertible will be available in the United States with three engine options. The entry-level powerplant is the familiar 2.5-liter five-cylinder engine that makes 170 horsepower and 177 pound-feet of torque, mated to a six-speed automatic transmission. Volkswagen’s fuel-efficient 2.0-liter TDI® Clean Diesel four-cylinder engine makes 140 hp and 236 lb-ft, but just as importantly delivers an EPA estimated fuel economy figure of 41 mpg on the highway with the six-speed manual transmission. (A six-speed DSG® dual-clutch automatic is also available with this engine.) Finally, the 2.0-liter turbocharged TSI® four-cylinder, which makes 200 hp and 207 lb-ft, can be ordered with either a six-speed manual or DSG automatic.
Beetle Convertible pricing for the U.S. will be announced closer to launch, which occurs in the last quarter of 2012.
Tags:
beetleHERNDONoil-burnerTDIVolkswagenVolkswagen GTI