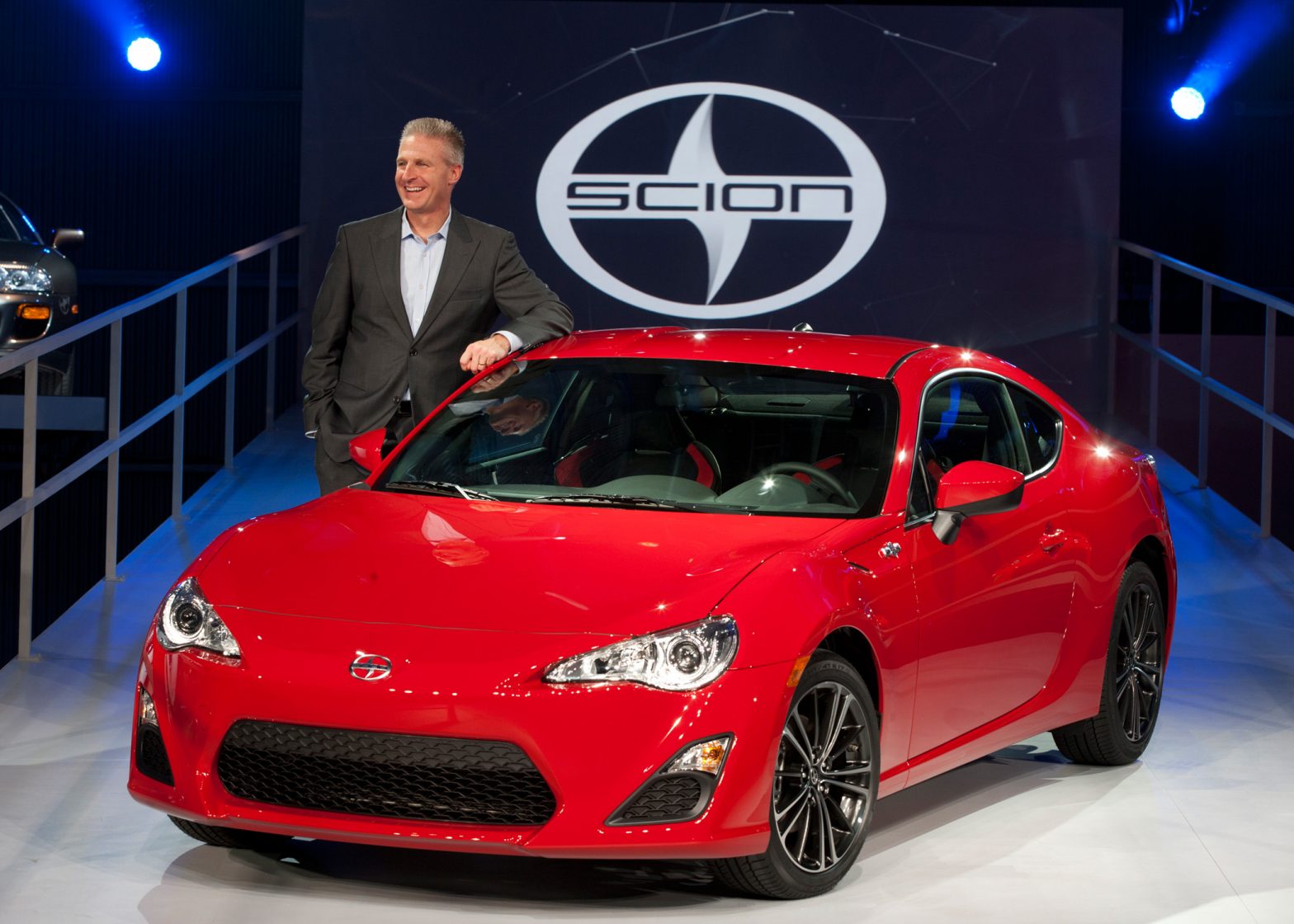 Just after the debut of the Toyota GT 86 and Subaru BRZ, Scion has revealed the production version of its boxer-powered, rear-wheel-drive FR-S sports car.
Scion’s fifth model is powered by a naturally aspirated, direct-injection, 2.0-liter flat-four producing a maximum 200 horsepower and 151 pound-feet of torque. That power is put to the rear wheels via a six-speed manual transmission, or six-speed auto with paddle shifters.
The FR-S features a 2+2 seating layout to match its compact size. It features a low center of gravity, promising good balance and sporty handling. At the corners are seventeen-inch lightweight alloy wheels and ventilated disc brakes.
Scroll down for all the details in Scion’s press release.
2013 Scion FR-S Brings the SPORT Back to the CAR
Low center of gravity and lightweight design achieves a “Pure Balance”
Compact rear-wheel drive sports car makes world debut
World’s first boxer engine to utilize Toyota’s D4-S direct and port injection system
Scion Vice President Jack Hollis unveils the 2013 FR-S compact rear-wheel drive sports car in Los Angeles on Nov. 30, 2011.
Los Angeles – November 30, 2011 – Scion tonight unveiled its 2013 FR-S compact rear-wheel drive sports car to a crowd of eager car enthusiasts. The high-performance coupe is the fifth model to join the Scion family and will go on sale in the spring of 2012.

“Serving as a laboratory for Toyota, Scion is always experimenting with new things,” said Jack Hollis, Scion vice president. “The brand is iconic with the xB, adrenalized by the tC, and groundbreaking with the iQ. The FR-S will no doubt serve as the halo car, expanding Scion into a new dimension of driving performance.”

The FR-S is a true “scion,” born into a lengthy history of Toyota performance cars and motorsports. The sports car is most inspired by the AE86 generation of the Corolla, better known as the Hachi-Roku, meaning “8-6” in Japanese. The front-engine, rear-wheel-drive coupe was lightweight and well balanced, making it a solid choice for driving enthusiasts.

Inspired by the AE86, the FR-S is designed around the core goal of achieving, “Pure Balance.”   The balance begins with the strategic use of the world’s only flat boxer engine in a front-engine, rear-wheel drive configuration. The engine’s compact size and flat shape allow it to be mounted mid-ship and extremely low, giving the car a dynamically favorable front-to-rear weight ratio of 53:47 and a low center of gravity comparable to some exotic supercars.

The FR-S’s 2.0-liter, naturally aspirated four-cylinder engine is the result of a joint development between Toyota and Subaru. The partnership begins by combining Subaru’s newly developed horizontally opposed engine and Toyota’s cutting edge D-4S injection system that incorporates both direct and port injection.  The D-4S system, partnered with a high 12.5:1 compression ratio, results in an impressive 200 horsepower and 151 pound-feet of torque.

“We all know that it’s not hard to make horsepower and torque, but it is hard to do all that and still achieve impressive fuel economy,” Hollis said. “The FR-S accomplishes all three.”

The flat-four mates with either a six-speed manual or a six-speed automatic transmission. The manual offers quick, precise shifts with a short-throw; while the automatic transmission features aggressive up shifts and sporty rev-matched down shifts that are initiated by steering-wheel-mounted paddle shifters. Power is transferred to the pavement via a limited-slip differential.

The idea of “Pure Balance” is further realized by the FR-S’s lightweight design and compact size. The combination allows the car to be quick and nimble into and out of corners, with dynamic maneuverability and confident handling.  The coupe’s weight is kept to a minimum by utilizing an aluminum hood, a solid roof, and by featuring a trunk design instead of a hatchback.
The FR-S’s low weight is matched with a dynamically tuned suspension setup consisting of MacPherson struts up front and a double wishbone system in the rear. Lightweight 17-inch alloy wheels and ventilated disc brakes are on all four corners.

The fierce exterior of the FR-S is a solid reflection of its inner power. The profile, inspired by the Toyota 2000GT, reveals a hood and roof-line that is remarkably sleek and low, giving it an aerodynamic shape that channels air cleanly over to the top. The low stance continues to exaggerate the coupe’s menacing face, which is made up of sharp lines, a wide mouth and angular headlights. The aggressive front fenders protrude upward and boast the iconic ‘86’ piston emblem, which highlights the car’s AE86 heritage as well as its unique new boxer engine. The rear fascia sits low and wide, with aerodynamic lower treatments that surround the sporty dual exhaust system.  LEDs illuminate the edgy taillights, while center-mounted backup lights finish the muscular design.

The FR-S’s interior features a 2+2 seating configuration that is designed with both form and function in mind. The front seats are mounted extremely low and are comfortable yet assertive, while the rear seat folds down flat, creating flexible space. The large center-mounted tachometer is the focus of the three-gauge cluster, keeping the driver informed of the engine’s vitals. Speed is monitored by both digital and analog gauges.

Base Versus Loaded: 2012 Chevrolet Sonic Sedan