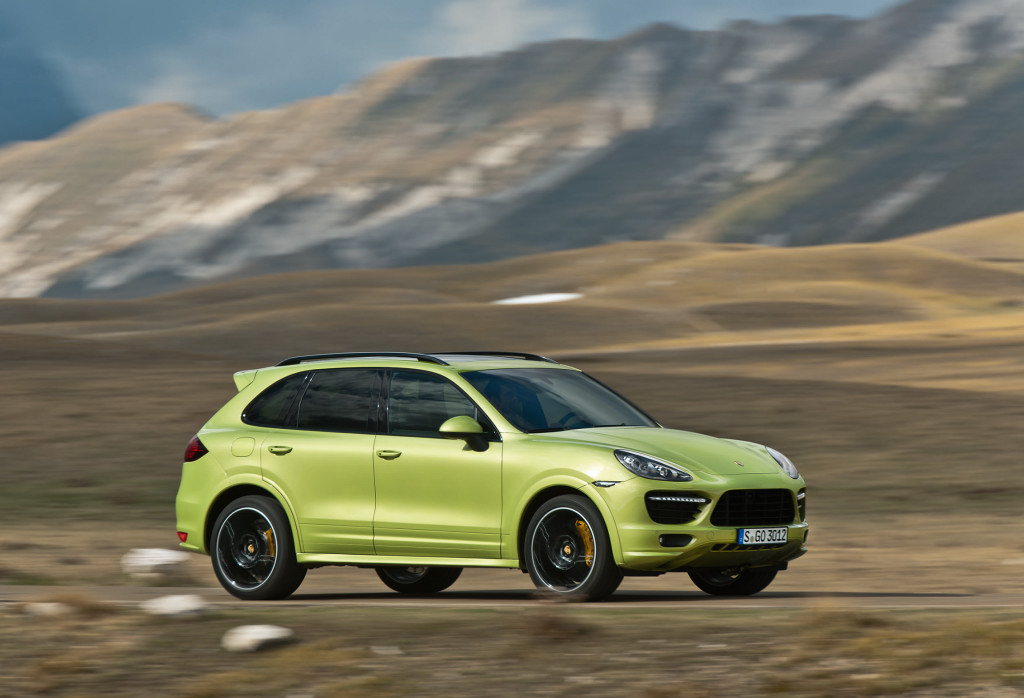 Porsche is unveiling the latest member of the growing Cayenne family at Auto China 2012, the Cayenne GTS. As with the previous generation of Cayenne, the GTS is a sportified Cayenne S.
The GTS is powered by a 4.8-liter, 420-horsepower V-8, up 20 horsepower from the Cayenne S, which sends power to all four wheels via an eight-speed Tiptronic S automatic transmission. It’ll hustle to 60 miles per hour in 5.4 seconds and top out at 162 miles per hour.
Other enhancements include the upgraded brakes from the Cayenne Turbo, and a 20-millimeter drop in ride height.
The GTS differs aesthetically from the standard Cayenne S thanks to its twenty-inch RS Spyder wheels, wider wheel arches, and black exterior trim. Eight-way adjustable front seats and Alcantara accents set off the interior, along with an optional Sport Chrono package.
The Cayenne GTS will enter US dealerships in August 2012, starting at $82,050.
Please scroll down for the official press release from Porsche.
High-Performance SUV with 420 HP, Lowered Chassis and Improved Driving Dynamics
ATLANTA – April 10, 2012 – Porsche is set to unveil the second-generation Cayenne GTS at the Beijing International Automotive Exhibition, also known as Auto China, on April 24, 2012. Based on the Cayenne S, this new model is equipped with 20 additional horsepower, a 20 mm lower ride height and a lower final drive ratio for improved driving dynamics.
The latest Cayenne transmits power from its 420 hp V8 to an active All-Wheel-Drive system coupled to an eight-speed Tiptronic S transmission with integrated Auto Start Stop function. The specially tuned engine and transmission combination enable the Cayenne GTS to sprint from a standing start to 60 mph in 5.4 seconds and to achieve a top-track-speed of 162 mph.
The Cayenne GTS is recognizable from the outside by its high-gloss black trim, prominent side skirts and wider wheel arches as well as the hood and front fascia from the Cayenne Turbo. 20-inch RS Spyder wheels with a unique offset for the GTS are standard as are upgraded brakes from the Cayenne Turbo. Two new colors are available for the Cayenne GTS; Peridot Metallic and Carmine Red. A sport exhaust system with matte black twin tailpipes is standard.
Inside, the Cayenne GTS features exclusive GTS eight-way adjustable front sports seats with Alcantara accents. For the first time in the Cayenne, a new Sport Chrono package is now available to monitor the improved performance offered by the GTS model. Additionally, a Sound Symposer channels authentic engine intake sounds into the cabin.
The 2013 Cayenne GTS will go on sale in the U.S. in August 2012, with a base MSRP of $82,050, not including a $975 delivery charge.
About Porsche Cars North America
Porsche Cars North America, Inc. (PCNA), based in Atlanta, Ga. is the exclusive U.S. importer of Porsche sports cars, the Cayenne SUV and Panamera sports sedan. Established in 1984, it is a wholly-owned subsidiary of Porsche AG, which is headquartered in Stuttgart, Germany, and employs approximately 220 people who provide parts, service, marketing and training for 194 dealers. They, in turn, work to provide Porsche customers with a best-in-class experience that is in keeping with the brand.
Tags:
AtlantaAuto China 2012Beijing 2012Cayenne GTSGTSPorsche