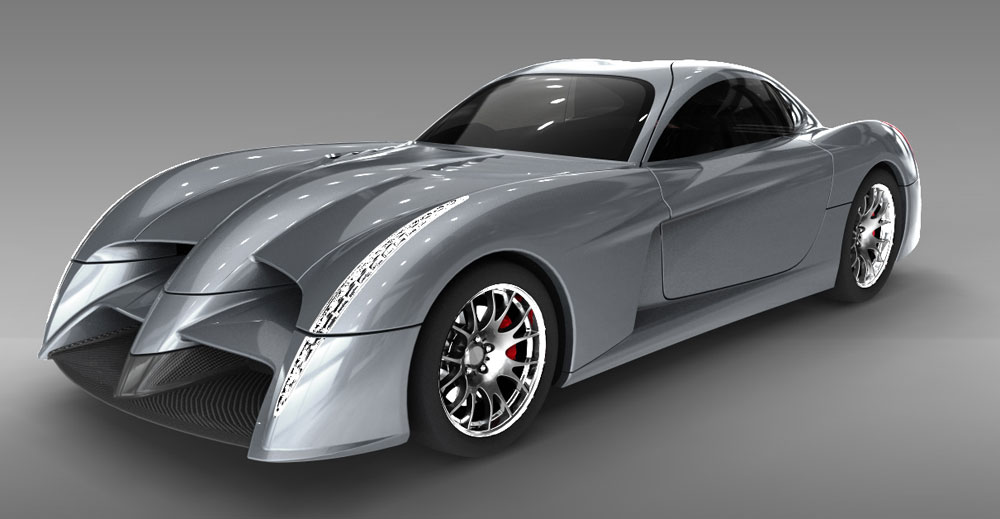 Panoz Auto Development, the Georgia-based exotic carmaker responsible for the Esperante and a slew of Le Mans cars, has just unveiled a new model, not coincidentally at the 24 Hours Of Le Mans.

Named the Abruzzi “Spirit of Le Mans”, this new Panoz will produce 600 horsepower and 590 ft-lbs of torque, although how this power will be made is a mystery, as no powerplant is mentioned in the press release. The previous Esperante was motivated by a 4.6-liter V-8 from Ford, so it is safe to assume some kind of V-8 will be in use, likely with the aid of forced induction.

The Abruzzi features a new green construction system, known as REAMS (Recyclable Energy Absorbing Matrix System), which uses composites that are lighter than carbon fiber, but are just as strong. The material in this system is also resistant to dents, is shatter proof, and recyclable.

Panoz plans to produce 81 examples of the Abruzzi, to be sold in Europe, parts of Asia, the Middle East, or South America (North America, no supercar for you). If you have the disposable income that the Abruzzi is likely to demand, you should have a minion get on the phone with Georgia and get your order in.

Panoz is planning on delivering the Abruzzi to customers at the Circuit de la Sarthe during the 2013 24 Hours Of Le Mans. Professional driving instructors will be on hand, teaching owners the limits of their new supercars using the Bugatti Circuit, adjacent to the main track. During the race it self, owners will be treated to the hospitality of the Automobile Club de l’Ouest, the organizers of the 24 Hours Of Le Mans.

LE MANS, France (June 8, 2010) – Don Panoz again has captured the Spirit of Le Mans. This time, one of the world’s most forward-thinking entrepreneurs is pairing his newest automotive masterpiece with the legacy of the world’s greatest auto race. The Panoz Abruzzi “Spirit of Le Mans” broke cover today at the Circuit de La Sarthe, an appropriate venue for the world debut of a ground-breaking automobile with a very appropriate delivery and acquisition program for its customers.

“This is culmination of equal parts time, effort and dreams,” said Panoz, founder of the Panoz Motor Sports Group. “The Panoz brand always has prided itself on hand-building and delivering an exotic automobile and experience to our customers. Our new offering takes this to a completely new level.”

The Abruzzi “Spirit of Le Mans” is more than a technological masterpiece from Panoz Auto Development (PAD), based in Hoschton, Ga. It represents a new chapter in automotive production and delivery, tied into the world’s most demanding auto race.

The super sports car will be offered as a strictly limited edition. Only 81 Abruzzi “Spirit of Le Mans” vehicles will ever be produced, corresponding to the number of Le Mans 24 Hour contests between the inception of the race in 1923 and the race to be held in 2013.

Abruzzi: The Car
The hand-built Abruzzi “Spirit of Le Mans” is a unique, front-engine, rear-transaxle and rear-radiator super sports car – road-legal in Europe and many countries of Asia, the Middle East and South America. The powertrain will deliver 600-plus HP with 590 ft.-lbs. of torque. Advanced design and aerodynamics offer astounding downforce and road-holding.

Performance is just one facet that sets the Abruzzi apart from other exotics. It also breaks new ground in environmental design and construction starting with the unprecedented implementation of the R.E.A.M.S.® – Recyclable Energy Absorbing Matrix System – body system that offers environmental, performance and structural advantages like no other automobile body system on the planet. Never used before on any road-going automobile, the multi-layer composite system is lighter than carbon fiber yet equally strong. Unlike carbon fiber however, it is dent-resistant, shatter-proof and recyclable.

Abruzzi also introduces TRIFECTACOOLING® technology. In addition to a normal high-efficiency radiator, there are stage two and stage three systems that lower coolant temperature on both the inflow to and the outflow from the radiator.

“These are advancements that will open up a new era of automotive design,” Panoz said. “Dating back to our first road car – the AIV Roadster – PAD has been a believer in efficient construction and design. This philosophy continues with our Abruzzi.”

Abruzzi: The Experience
The Panoz Abruzzi harkens back to a day where drivers would pilot their cars to Le Mans, race it twice around the clock then drive back home. It essentially captures the “Spirit of Le Mans” with a never-before-seen acquisition program that sets a new standard for personalization and delivery.

Given the roots of Panoz’s automotive dreams, it is only appropriate that the Abruzzi “Spirit of Le Mans” will be delivered to its owners at the famed Circuit de la Sarthe, shipped directly there from the Panoz factory. Each automobile will be linked to a specific Le Mans 24 Hour race, with the chassis number also containing that specific race date and the initials of the winning drivers and the history of that year.

Professional drivers will instruct owners in driving the car on the Bugatti Circuit at Le Mans. Service and repairs also will be attended to at the ACO facilities of the Circuit 24 Hours of Le Mans.

New vehicle owners also will be invited to the 24 Hours of Le Mans as guests of the ACO and Panoz at the ACO’s hospitality facilities in the “Model Sportif” at the circuit. New owners also will have the unique opportunity to drive a parade lap of the full 8.3-mile circuit at that year’s event.

During the Le Mans race week a “Spirit of Le Mans” reception will be held at the clubhouse of the famed Golf Des 24 Heuers in the historic town of Arnage. The new owners for that year will be the guests of the ACO officials and past “Spirit of Le Mans” award winners such as Jacky Ickx and Derek Bell.

“Being associated with the ACO and Le Mans is something very special to me,” Panoz said. “Being able to stand side-by-side with the heroes and legends of Le Mans gives me a sense of appreciation and passion for this grand event. I felt it was important to give our customers the same experience, and I am grateful to our partners at the ACO for helping make this happen.”

Panoz Auto Development produces leading-edge, fully certified automobiles and is best known for the first US-manufactured AIV (Aluminum Intensive Vehicle) – the Panoz AIV Roadster. The Panoz Esperante body and chassis also extensively employs aluminum for performance, safety and efficiency. The Panoz Esperante GTLM earned world-famous stature as a race car by winning the GT2 category at both the Mobil 1 Twelve Hours of Sebring and the 24 Hours of Le Mans in a single year – 2006.