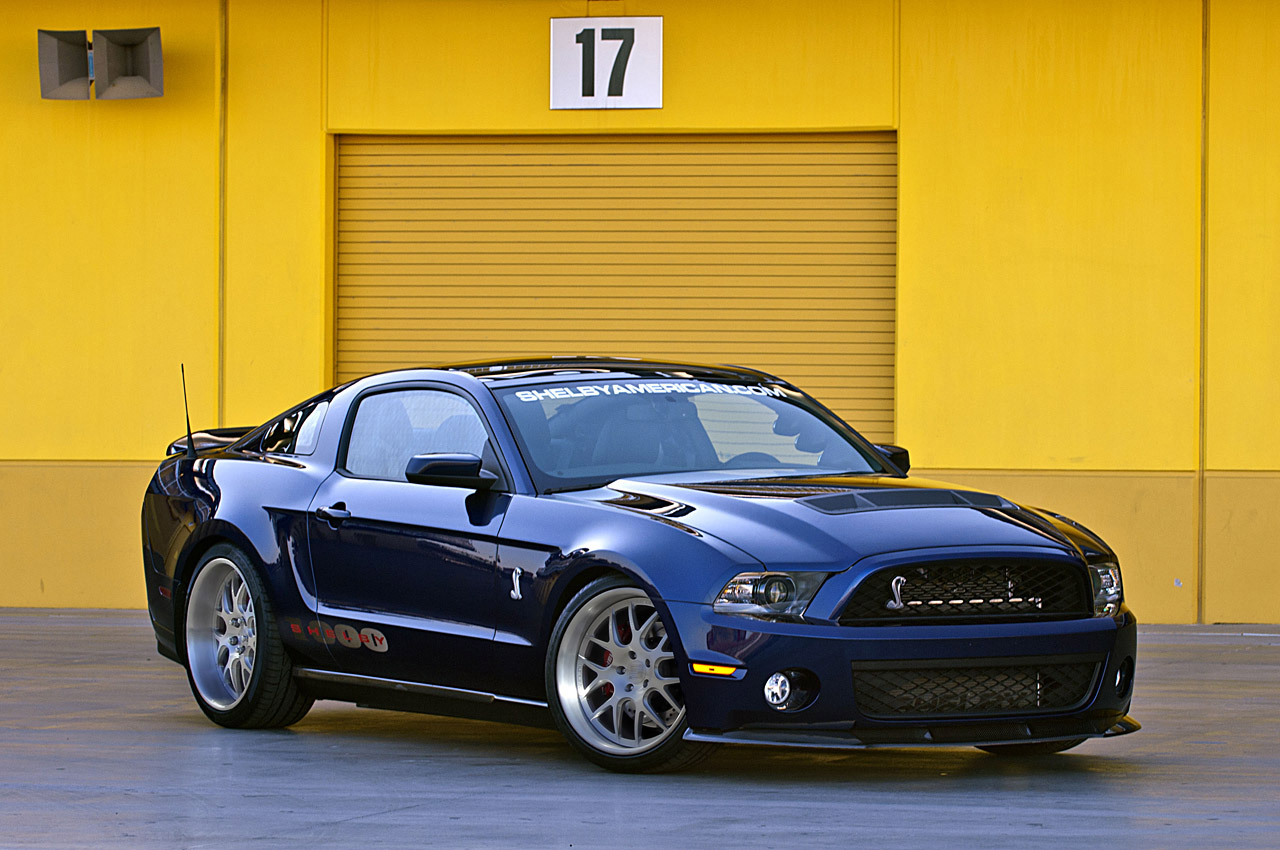 Do you remember our First Look on the Shelby GT500 Super Snake from the 2012 North American International Auto Show? Good. Now, were you one of the people that thought, “800 horsepower in a live-rear axle Mustang? That’s not nearly enough power.” If you were (and apparently Carrol Shelby was one such person), Shelby American would like to talk to you.
This is the 2012 Shelby 1000. That name is slightly deceiving, because there is no Shelby Mustang that gets 1000 horsepower. There’s a 950-horsepower, road-legal car that runs on pump gas, and there’s the 1100-horsepower track version (which probably runs on some combination of ground-up unicorn horn and clouds of Jupiter).
The process of converting Flat Rock’s finest GT500 to a Shelby 1000 is actually pretty straightforward. Strip a 5.4-liter V-8 down to the block, give it new rods, crank, and pistons, flow the heads, upgrade the exhaust, give it a new supercharger, tune it, and voila, 950 horsepower. We suspect the extra 150 horsepower comes from whatever you put in the tank, rather than any major mechanical upgrades.
Harnessing that power means new six-piston-front and four-piston-rear brakes, along with new struts, sway bars, and bushings. Power is channeled through a nine-inch rear end.
Not surprisingly, the Shelby 1000 is to be a limited affair. The asking price for the road-legal version is $149,995, while the 1100-horsepower track car will run $154,995. That price, by the way, does not include the $48,810 donor car.
If this Mustang sounds like just your sort of crazy and you have about $200,000 sitting around that’s not earmarked for the plethora of less-psychotic vehicles that are available at this price point, then be sure to contact Shelby American.
Please scroll down for the official press release from Shelby American.
SHELBY AMERICAN TO INTRODUCE ITS MOST POWERFUL SHELBY YET
AT NEW YORK INTERNATIONAL AUTO SHOW
Shelby American™ will introduce its most powerful Shelby yet on April 5, 2012, at the New York International Auto Show. Carroll Shelby and his team created the Shelby 1000 by starting with a 2012 Ford Shelby GT500 and kicking its handling, horsepower and braking to the performance edge.
The Shelby 1000 will be offered in both a street and a Shelby 1000 S/C “off-road” track version. The street legal, pump gas version dyno’s out at approximately 950 HP, while the track oriented S/C edition is rated at over 1,100 HP.
“Carroll Shelby is a visionary who has pushed the boundaries of performance his entire life,” said John Luft, president of Shelby American. “He challenged the Shelby American team to develop the Shelby 1000 and wanted to unveil this amazing new Shelby at the New York Auto Show celebrating 50 years since he unveiled the very first Shelby Cobra that changed the face of high performance. We will have that very car, Cobra #1 (CSX2000) along with Shelby 1000 on display in our Shelby American booth in New York.”
To build the car that Carroll Shelby envisioned, Shelby American takes Ford’s 5.4 liter V8 down to the block to add new rods, crank and pistons. The team flows the heads, upgrades the cooling and exhaust, replaces the supercharger, tunes it and then sprinkles it with a little Shelby magic.
To complement the new power, the Shelby 1000 has improved the handling and stopping capabilities with 6 pistons in front and 4 pistons in the rear, while the suspension includes new struts, sway bars and bushings. The new solid driveshaft is connected to a new 9-inch rear end. Exterior cues incorporate aerodynamics while maintaining a stealthy appearance. The hood, rear panel and splitter are functional pieces.
A limited production of Shelby 1000s will be built, each numbered and documented. The post-title street package for the Shelby 1000 starts at $149,995 and the track S/C version starts at $154,995, not including the base GT500. A completed Shelby 1000 is expected to be approximately $200,000.
Shelby American will accept orders once the Shelby 1000 is unveiled at the New York International Auto Show. Those interested in reserving a car can contact Shelby American at (702) 942-7325 or visit www.shelbyamerican.com after April 5, 2012.
About Shelby American, Inc. and Carroll Shelby Licensing
Founded by legend Carroll Shelby, Shelby American Inc. manufactures and markets performance vehicles and related products. Shelby American is a division of Carroll Shelby International Inc. (CSBI.PK). Carroll Shelby Licensing Inc., also a wholly owned division, is the exclusive holder of Carroll Shelby’s trademarks and vehicle design rights. It also holds trademark rights for Shelby-branded apparel, accessories and collectibles. Info is at www.carrollshelbyinternational.com.
Tags:
Carrol ShelbyCarroll Shelby International Inc.GT500Shelby 1000Shelby American Inc.Shelby GT500 Supershelby mustangSHELBY YETUSD