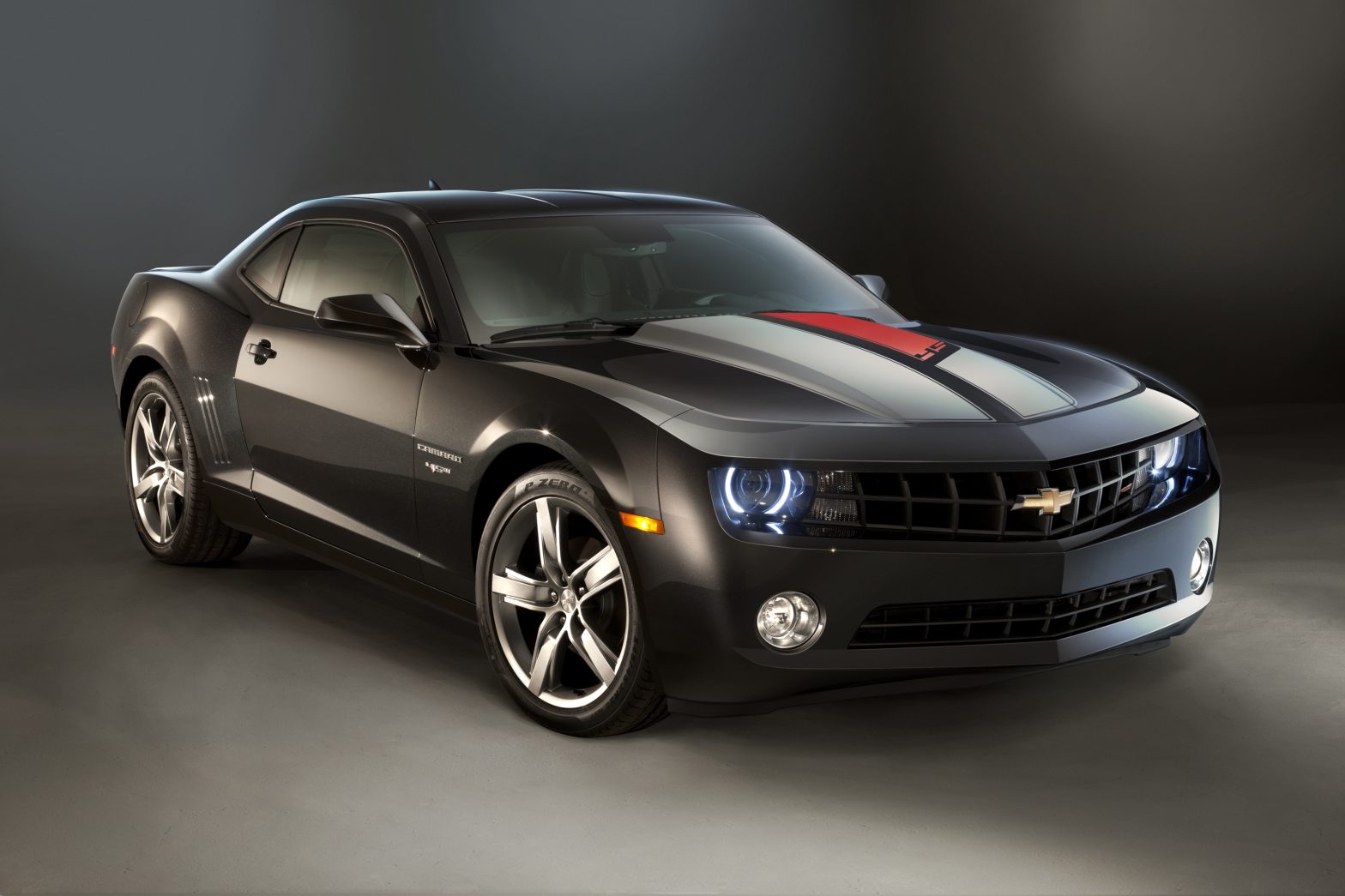 For 2012 the Chevrolet Camaro is getting an improved 323-horsepower 3.6-liter V-6, new performance suspension for the SS, new instrument panel, steering wheel, and avaliable rear-view camera. It’s also getting a 45th Anniversary Special Edition with a whole host of unique features to set it apart and celebrate the nameplate’s history.

The 45th Anniversary treatment will be available on the Camaro 2LT and 2SS. It will make its first public appearance at Camaro5 Fest II in Arizona, and will go on sale this summer.

Scroll down for more information in the press release from Chevrolet.

“The appeal of Camaro design and performance has powered it to the top of its segment,” said Rick Scheidt, vice president of Chevrolet marketing. “For 2012, we’re capitalizing on that momentum with enhancements to Camaro’s performance and comfort.”

Also coming in early 2012 is the high-performance Camaro ZL1, the most technologically advanced car ever developed in its segment.

The LFX delivers the most standard power in the regular sports car segment. It is also 20.5 pounds (9.3 kg) lighter than its predecessor, which promotes a more balanced driving experience. EPA-estimated highway fuel economy for the ’12 Camaro is 30 mpg (2LS model).

Direct injection is the key technology enabling the engine’s combination of power and efficiency. It optimizes fuel delivery to the combustion chamber by introducing fuel closer to the combustion chamber. The result is better efficiency in the combustion process leading to increased fuel efficiency at part and full throttle. It also uses a new fuel pump for the direct injection system, along with a new, isolated fuel rail. The new fuel pump is quieter, while the isolated fuel rail further reduces fuel system noise.

The new FE4 suspension debuts as a performance improvement for the Camaro SS coupe in 2012, focusing on more refined handling.

“Our objective was to create a more precise sport suspension for the SS coupe, with greater road-holding capability,” said Al Oppenheiser, Camaro chief engineer. ”We applied lessons learned from extensive track testing to better refine the suspension geometry for flatter cornering, a more neutral balance during hard turns, and minimized understeer at the limit.”

Elements of the FE4 package include:

More than just new components, the new FE4 performance suspension incorporates learning from the ongoing development of the high-performance Camaro ZL1. In particular, the suspension geometry has been adjusted, including reshaped stabilizer bars that are repositioned outboard of the shock mounts. This results in more effective body control and more precise response in performance driving.

The 2012 model year brings appearance, ergonomic and technology upgrades inside for Camaro drivers and passengers. The interior updates include a revised instrument panel appearance, with new instrument graphics and trim, as well as a new steering wheel design and a power lift feature for the front passenger seat. The steering wheel features a fresh new look and ergonomic improvements intended to support performance driving.

Also new for Camaro in 2012 is a Rear Vision Package, which adds a rearview camera system and an auto-dimming mirror to the existing Rear Park Assist feature. The rearview camera system complements the rear parking assist by providing a video display of the area behind the car, with the video image appearing in the car’s inside rearview mirror.

On the exterior for 2012, a new rear spoiler will be added as a standard feature for Camaro; and the taillamps that had been a part of the RS appearance package option are also being made standard. Additionally, a new, body-color “sharkfin” antenna joins the RS package.

The exterior signature of the 45th Anniversary Special Edition is its unique rally stripe, in red and silver, that contrasts the Carbon Flash Metallic paint. The package also includes:

Founded in Detroit in 1911, Chevrolet celebrates its centennial as a global automotive brand with annual sales of about 4.25 million vehicles in more than 140 countries. Chevrolet provides consumers with fuel-efficient, safe and reliable vehicles that deliver high quality, expressive design, spirited performance and value. The Chevrolet portfolio includes iconic performance cars such as Corvette and Camaro; dependable, long-lasting pickups and SUVs such as Silverado and Suburban; and award-winning passenger cars and crossovers such as Spark, Cruze, Malibu, Equinox and Traverse. Chevrolet also offers “gas-friendly to gas-free" solutions including Cruze Eco and Volt. Cruze Eco offers 42 mpg highway while Volt offers 35 miles of electric, gasoline-free driving and an additional 344 miles of extended range. Most new Chevrolet models offer OnStar safety, security and convenience technologies including OnStar Hands-Free Calling, Automatic Crash Response and Stolen Vehicle Slowdown. More information regarding Chevrolet models can be found at www.chevrolet.com