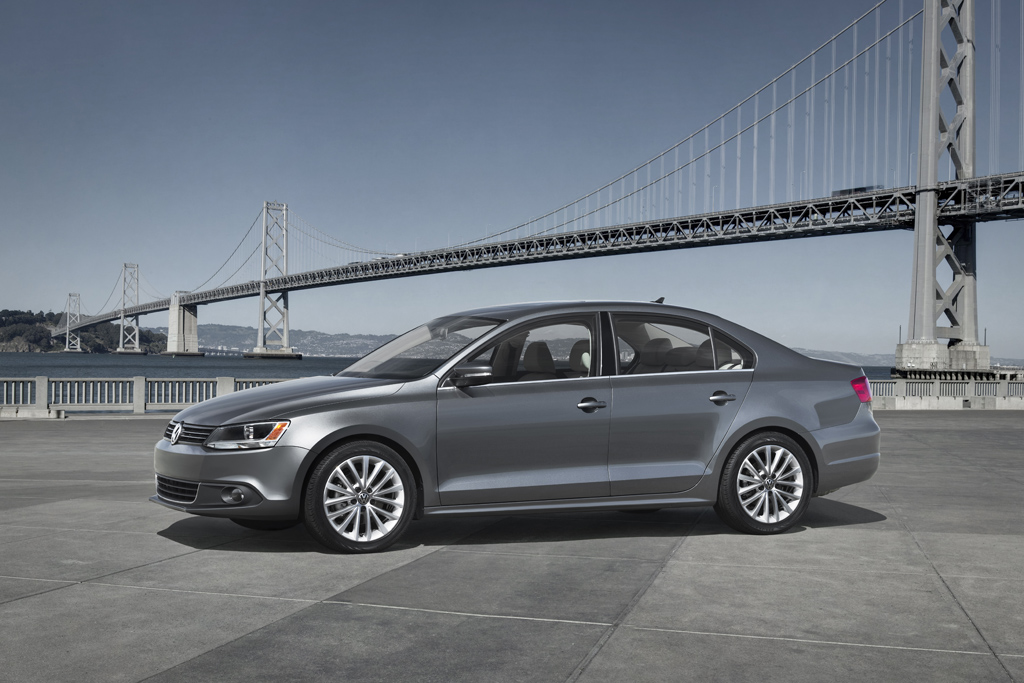 Volkswagen has just unveiled its sixth-generation Jetta at a massive celebration in New York’s Times Square. The new Jetta has done away with the questionable looks (no more chrome nose!) of the current model, and instead has been given a more chiseled look, that puts it in line with the current face of the VW range.

The refreshed interior offers an additional 2.6-inches of legroom. It may not sound like much, but after sitting in the back of our TDI Cup Edition, it’ll make a difference. The new interior also features interior accents that can be changed out at the dealership. The rest of the interior sounds like typical VW fare, clean, thoughtfully laid out, and as comfortable as a freshly laundered suit.

Engine and transmission options are similar to the current-gen Jetta, with the 2.5-liter I-5 soldiering on. The 2.0T I-4, and the 2.0-liter TDI are on offer as well. A six-speed manual is standard regardless of engine, while the I-5 offers a six-speed automatic. 2.0T and TDI models are available with a six-speed DSG gearbox as an option.

Of note for the hatch-averse enthusiasts out there, VW’s press release specifically mentions the existence of a GLI. As with the last GLI, a sportier interior, stiffer suspension, bigger wheels, and more aggressive body work will team up with a turbocharged 2.0-liter I-4 and either a six-speed manual or DSG.

Look for the sixth-gen Jetta to appear in dealerships in October of 2010, with a starting price of $16,000.

Please scroll down for the official press release from Volkswagen.

"Today marks the beginning of a new era for Volkswagen and for Jetta," said Stefan Jacoby, CEO of Volkswagen Group of America, Inc. "The all-new 2011 Jetta is a class-up driving experience with the kind of styling, design and power under the hood normally found in more expensive luxury cars. At an extremely attractive price, this car is sophisticated, fun to drive and practical."

The North American version of the all-new 2011 Jetta features the powerful and efficient German engineering drivers have come to expect from Volkswagen. Four engines will be available in the U.S. and Canada, including a 2.0-liter turbodiesel direct injection (TDI) Clean Diesel featuring common rail injection with 236 lbs-ft. of torque (320 Newton-meters). The engine runs as quietly as a gasoline engine, but yields the power of a sports car achieving 0-60 mph in 8.7 seconds. Additional engines include the 2.0, 2.5 R5, and as of 2011, the 2.0 TSI. All Jetta engines will be offered with a manual transmission as standard equipment. An automatic transmission will also be available with each engine version as an option. On the new 2.0-liter TDI and 2.0-liter TSI, Volkswagen will offer the 6-speed DSG – one of the most advanced and efficient automatic transmission systems in the world. In the U.S., S, SE, SEL and TDI versions of the Jetta will be available, as will a 2.0-liter GLI.

The all-new 2011 Jetta has been completely overhauled, inside and out. Its new wheelbase and exterior length are significantly bigger than its predecessor – resulting in superior performance, more space and greater comfort. At 182.7-inches long, 57.1 inches tall and 70.1 inches wide, it is more than 3.5 inches longer than its predecessors. The interplay of exterior dimensions leads to a powerful balance of proportions. In parallel, the new Volkswagen ‘design DNA’ sharpens the car’s styling. This has resulted in clear, precise lines and athletically muscular surfaces, which lend a timeless elegance and dynamic styling to the sedan.

On the front end of the car, the prominence of horizontal lines defines the design. The high-gloss black radiator grille combines with the car’s trapezoidal headlights to form a styling unit. Under this is the fully painted bumper, which is designed as cleanly as a sculpted surface. Below that, another cooling air intake and the tray-shaped front spoiler gives the car a sporty finish. The upper front end section shows a powerful transition from the v-shaped engine hood to the fenders on the sides; the shoulder section realized here derived from the NCC concept car, and provides dynamic and muscular styling.

The styling characteristics in the side profile of the Jetta meld into yet another interpretation of the ‘design DNA’ conceptualized by Walter de Silva, the Italian Head of Design for the Volkswagen Group and the German Head of Design for the Volkswagen Brand, Klaus Bischoff. A great example of the unique styling characteristics is found in the shoulder or ‘tornado’ line and the powerfully emphasized arches of the wheel wells. Formally, they intersect the large homogeneous surfaces, conveying a strong dynamic image. Thanks to wide track dimensions, the wheel arches also form a precise transition – as though cut with a knife – up to the tires, which could be as much as 18-inches.

With integrated turn signal indicators, the styling of the outside mirrors emulates the larger CC. Compared with the previous model, the all-new Jetta has grown in clarity and pre-eminence in its side profile. Harmonized surfaces and sporty shoulders dominate the rear section. Powerful in illumination and visually distinctive, the taillights are split into two sections, extending on either side from the fender into the tailgate.

A key benefit of the extended wheelbase is that it resulted in a more comfortable layout of the five-seat rear seating area. Legroom is now a long 38.1 inches, a 2.6-inch gain from the previous model. Customers looking for a more personalized touch can for the first time have interior accents changed out at a Volkswagen dealer.

Engineers went to work on the interior down to the finest details, providing a level of quality and perfection far beyond other vehicles in its class. A common conceptual thread throughout the car is the intuitive controls and well-arranged instruments. The new steering wheel designs impress both visually and to the touch. The right hand rests ergonomically on the gear shift grip. Further up on the center console are the newly designed and intuitive controls for climate, radio and radio-navigation systems. This console section is slightly inclined toward the driver for ideal alignment of the cockpit. Also in optimal view are the round instruments. The multifunction display (trip computer) is located between them.

The rear bench seatback is split 40/60 and folds, increasing the car’s versatility. The tailgate can also be opened from inside the car by a remote unlock switch. Up to six airbags (two front airbags, two side airbags in front, two window airbags/thorax airbags in the area of the front side windows) are also part of the equipment package.

Previous Jetta versions received accolades for safety with features like electronic stability control and tire pressure monitoring standard. The all-new 2011 Jetta has been further enhanced with even more protections and crash safety improvements

About Volkswagen of America, Inc.

Founded in 1955, Volkswagen of America, Inc. is headquartered in Herndon, Virginia. It is a subsidiary of Volkswagen AG, headquartered in Wolfsburg, Germany. Volkswagen is one of the world’s largest producers of passenger cars and Europe’s largest automaker. Volkswagen sells the Eos, Golf, New Beetle, New Beetle convertible, GTI, Jetta, Jetta Sportwagen, Passat, Passat Wagon, CC, Tiguan, Touareg and Routan through approximately 600 independent U.S. dealers. All 2010 Volkswagens come standard-equipped with Electronic Stabilization Program. This is important because the National Highway Traffic Safety Administration (NHTSA) has called ESC the most effective new vehicle safety technology since the safety belt. Visit Volkswagen of