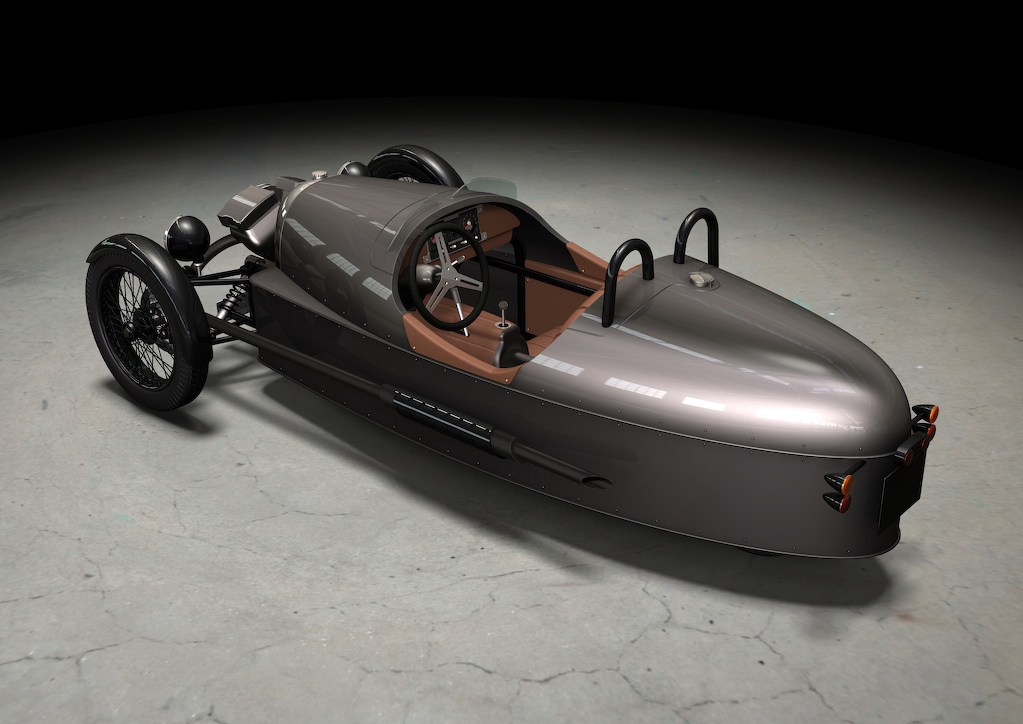 Hold on to your elbow patches, the flat cap and pipe smoking set are going to go bananas for this one. Auto history buffs and dads old enough to remember smoking in the delivery room will no doubt remember that British carmaker Morgan cut its teeth on a simple, economical vehicle known as the Threewheeler. The powered tricycle was designed by Harry Morgan, and produced from 1909 to 1953. Now, it’s set to make a comeback.

Morgan announced today plans to revisit the Threewheeler, sending out a small set of renderings to give us a feel for the thing, and a set of baseline specifications.

A Harley-Davidson-sourced 1.8-liter V-twin engine will be mated to a Mazda-sourced five-speed gearbox, and wrapped in a package that is at once forward-looking and retro. Perfect Morgan, in other words.

The Threewheeler will be built with a tubular steel frame, skinned with slinky aluminum bodywork, and trimmed out with a leather-clad, aircraft-style cockpit. The company is estimating a curb weight of 1102 pounds, and output of about 100 horsepower at the wheel. Expect that lightness to propel you from 0-60 miles per hour in just about 4.5 seconds, and on to a top speed of 115 mph.

We’re not entirely sure when and where this new-fangled Threewheeler will go on sale: Morgan is calling the car/bike a 2011 model year vehicle, though it makes no mention of specific dates, or target markets. If it does come to the US though, we know exactly which pair of goggles we’ll wear on our test drive.

Scroll down below for the official Morgan press release.

The success of the Morgan Motor Company was founded on the manufacture of an icon, the Morgan Threewheeler. This brilliant but simple design by engineer Harry Morgan (HFS) became one of the most successful lightweight cars of the early days of motoring. From 1909 to 1953 around 30,000 Morgan Threewheelers were manufactured in Malvern and many more were made under license by Darmont Morgan in France. For many lucky owners it was their first experience of the freedom that car ownership could bring. Fast acceleration combined with a cruising range of over 50 miles to a gallon of petrol was an unbeatable combination in the day. On the race track the car became very successful, famously winning the French Grand Prix in 1913 and regularly lapping the banked Brooklands track at an average speed of over 100 mph. Stirling Moss who owned one is on record as saying “My Morgan was a great babe magnet”.

Whilst the world is a very different place in 2011 the time is right to relaunch this exceptional design. Young people may not have experienced the same thrill as the early Threewheeler pilots and perhaps cult status is assured for a car with such an emphasis on simple honest functionality. The future of road transport in the 21st Century has two big issues, the conservation of precious resources and the protection of our beautiful natural environment. Downsizing and a philosophy of simplicity are ways of dealing with these problems.The Morgan Threewheeler is a proven answer to these problems. In 2011 the Morgan Motor Company is to expand its range and go back to its roots.

The 201 1 Morgan Threewheeler is a fusion of modern technology into a classic design. By fitting the latest “Screaming Eagle” 1800 cc engine from Harley Davidson and a Mazda 5 speed gearbox the car provides ‘get in and drive’ simplicity and reliability. A sturdy tubular frame and two rollover bars surround the passenger compartment. An aerodynamic super formed ‘bullet’ hull protects the occupants from the weather.

However the feeling of freedom and contact with the road through the front wheels will bring to mind the joy of driving cars from the 20’s and 30’s but with none of their fragility or temperament. A leather padded aircraft style cockpit indulges the feeling of ‘flying through the air’. Refining the original design has produced a unique 21st century vehicle. A sub 500kgs overall weight and a slippery hull provides the ultimate in performance and fuel economy. The Morgan Three wheeler has unrivalled power to weight for its on the road price.

The specification ensures the driver and passenger have exactly what they need whilst encapsulating the original Morgan Threewheeler’s DNA. The attractive themes apparent in the successful Sport range of traditional Morgans forms the basis of the specification of the cars. Eight Sport colours with black detailing and a choice of black or tan leather are offered.