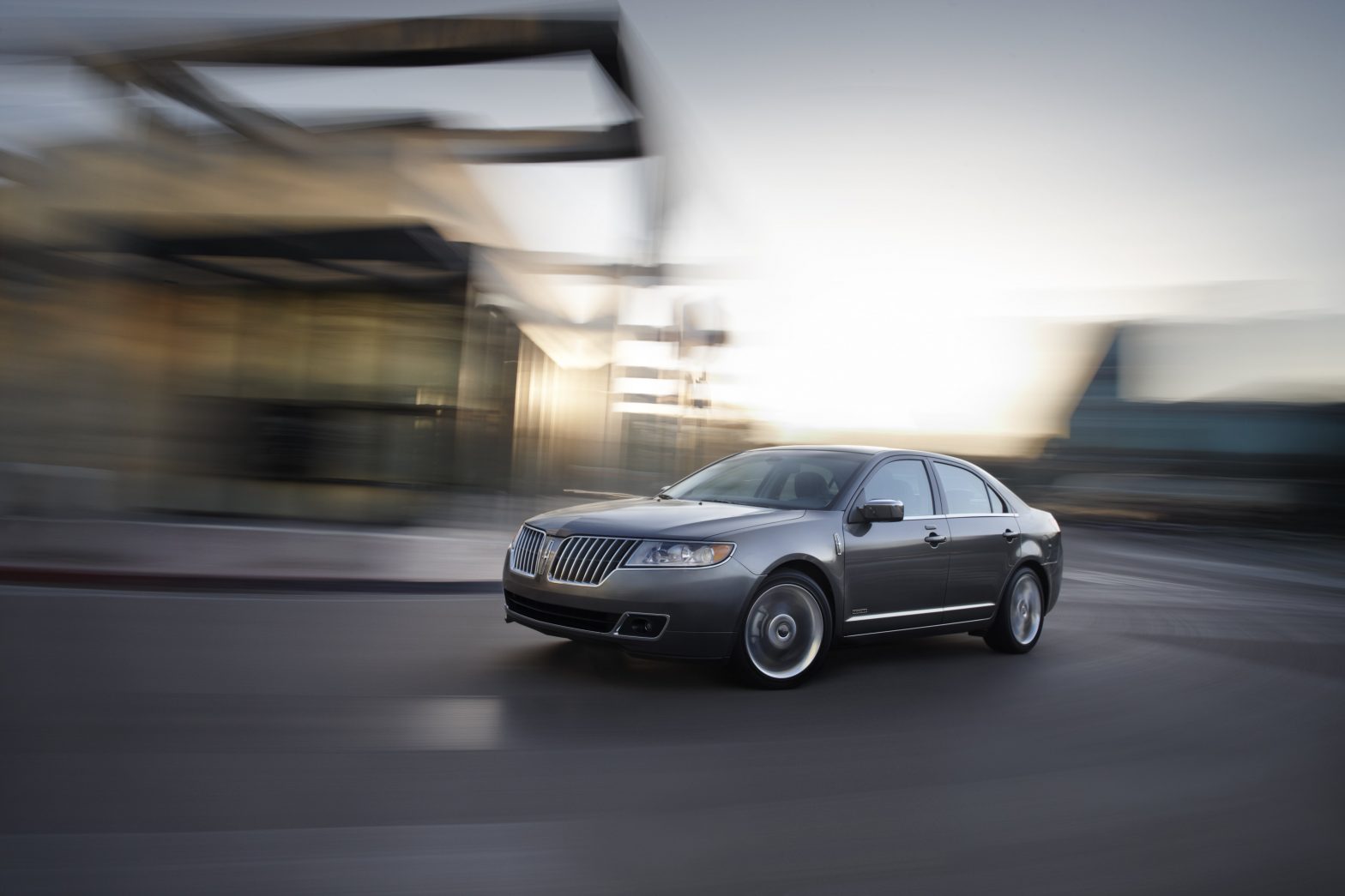 Continuing the global automotive trend of offering everything under the sun with a hybrid system, Ford has taken the wraps off of the 2011 Lincoln MKZ Hybrid. Aimed squarely at the Lexus HS250h, the MKZ uses the same hybrid drive system found in the Fusion Hybrid.

A 2.5-liter I-4 teams with an electric motor to offer a reasonable 191 horsepower. Expect Fusion Hybrid-like mileage, so 41 miles per gallon in the city. The MKZh comes standard with quite a bit of Ford technology, including Sync, SmartGauge with EcoGuide, and MyKey which limits how loud the radio can be turned up, and will make audible reminder tones at 45, 55, and 65 miles per hour.

No word on official release date, but expect it within the next year.

In the meantime, check out the official press release and gallery from Lincoln.

Lincoln’s first-ever hybrid is expected to deliver at least 41 miles per gallon in the city when it goes on sale this fall.

The Lincoln MKZ Hybrid’s projected fuel economy tops its nearest competitor – the 2010 Lexus HS 250h – by 6 mpg. It also trumps the Lexus with room for one more passenger and more standard luxury and segment-exclusive safety features.

"Today’s luxury customers do not want to make sacrifices. Lincoln has found a way to deliver a luxury sedan with the comforts they expect, the technology they want and the environmental responsibility society demands," said Derrick Kuzak, Ford’s group vice president, Global Product Development.

The system combines the best attributes of the gasoline engine and electric battery-driven motors to deliver optimal performance and fuel economy.

More standard luxury
The 2011 Lincoln MKZ Hybrid comes standard with features and technologies that are either not offered on the Lexus HS 250h or are available only at an extra cost. They include:

10-Way Power Passenger Seat – This seat is designed to accommodate a diverse group of passengers. Memory functions enable passengers to fine-tune and recall their positions.

Genuine Wood Trim – In addition to their exquisite appearance, the Swirl Walnut and Olive Ash wood trims offered in the Lincoln MKZ Hybrid are eco-friendly as well. The veneers come from well-managed forests, as defined by strict environmental, social and economic standards, and from other rigorously controlled sources.

Reverse Sensing System – This system senses what drivers might not see behind them and relays an audible alert if objects are near, which increases in frequency the closer a driver gets.

Keyless Entry Keypad – This Lincoln-exclusive feature provides secure entry at a driver’s fingertips. A personal combination holds a memory for driver preferences. So if an owner is out for a run and doesn’t want to take the keys along, the vehicle can be opened with the touch of a few buttons.

Easy Fuel® Capless Fuel-Filler – This Lincoln-exclusive feature uses an integrated spring-loaded flapper door to eliminate the need for a fuel tank screw cap. That means no more fumbling to remove and tighten the cap and less fuel odor on a driver’s hands at the pump.

Personal Safety System™ – A Lincoln-exclusive suite of seven protection technologies works together as a system to help protect vehicle occupants. The system includes dual-stage front air bags and an occupant classification system to sense whether the passenger seat is occupied. It tailors – or suppresses – air bag deployment to help provide an appropriate level of protection. It also features the Ford Belt-Minder® system to remind front-seat occupants to buckle up.

MyKey™ – This Lincoln-exclusive feature allows parents to program a key to limit speed and audio volume to encourage teens to drive safer and improve fuel efficiency. It also encourages seat belt usage, provides earlier low-fuel warnings, and can be programmed to sound chimes at 45, 55 and 65 mph.

The Lincoln MKZ Hybrid also includes standard Bridge of Weir leather seats. The world-renowned luxury leather from Scotland is unembossed, allowing the natural beauty and character of the grain to shine through. The leather is milled for up to 12 hours to ensure a soft hand, and Bridge of Weir uses a chromium-free tanning process, which makes it easier to recycle.