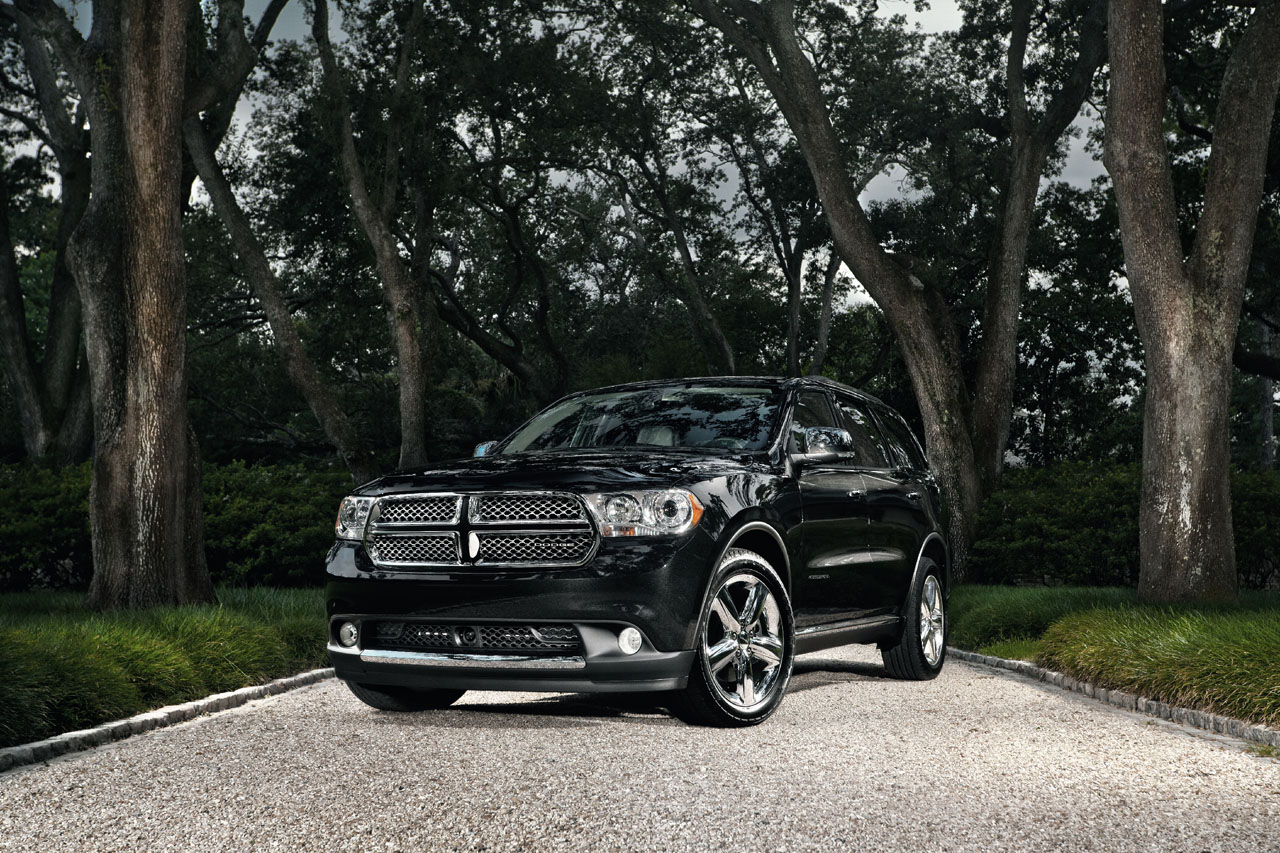 Two engine choices will be available at launch for the ’11 Durango: a 3.6-liter V-6, and the 5.7-liter HEMI V-8 that is in heavy Chrysler-land rotation (for good reason). All-wheel drive will be available with both powerplants.

Calling the new Durango a “Performance SUV with a Soul” Dodge is clearly looking to differentiate the vehicle from sister-brand Jeep’s all-new Grand Cherokee, but also from the out-going Durango itself. The SUV has been stiffened and lowered, with the company claiming a much more enthusiastic driving profile.

That personality change has been followed on nicely with a much-needed image makeover for the Durango. The new-look SUV is sleeker and edgier of design, though does seem to rely heavily on the visual punch of chrome (seriously, there’s a lot of chrome here). All-in though, we have to admit that these first images show a much more attractive vehicle than the outgoing model.

The Dodge press release also claims great improvements in interior quality and execution. We want to believe, but the company has only seen fit to provide one interior image thus far, a rather close-cropped section of the new steering wheel—we’ll reserve judgment until we have a closer look then.

The Dodge PR folks are also frighteningly candid about what was found lacking in the previous Durango cabin. We couldn’t help laughing a bit when reading this sentence, a direct quote from the official press release:

“The Durango’s all-new interior is a surprise owners always deserved but never expected.”

Hopeful for the future, sad for the past, understanding of it’s own image problem—this new Chrysler is a deeply complex company, we’ve gotta say.

Read on below for the official Dodge press release.

Buckle in and hold tight. Dodge is jumping back into the sport utility (SUV) segment with the 2011 Dodge Durango, a three-row vehicle spacious enough to carry the entire crew and performance-tuned to thrill anyone who truly loves to drive. Durango will lead the Dodge brand’s new product onslaught for 2011.

From its sleek exterior design to its modern, spacious interior, and intelligent, fuel-efficient and powerful powertrain options, the 2011 Dodge Durango is all-new from the inside out. And the changes are more than skin deep. The Durango’s stiffened unibody structure is engineered with the driving enthusiast in mind. The end result is a vehicle that delivers premium driving performance combined with SUV capability and crossover versatility.

The Durango’s all-new interior is a surprise owners always deserved but never expected. Created by the same interior design studio that designed the much-lauded interior in the Ram trucks and the all-new Jeep Grand Cherokee, the Durango’s luxurious interior materials and thoughtful touches will make owners and their crews want to jump in, hunker down and thoroughly enjoy even the longest drive. Everywhere they touch, Durango passengers will feel materials that are refined and soft to the touch. Not only is it a pleasure to behold, it is extremely functional and gives owners a first-class experience, regardless of the trim level. Durango’s interior is also extremely comfortable for all three rows of passengers, and there’s a surprising amount of interior flexibility. With 22 different seating configurations, there’s plenty of room to store and move plenty of people and their gear.

The best part is, consumers will get all of the all-new Durango’s capability, functionality and flexibility and still get excellent fuel efficiency. In fact, drivers can go more than 500 miles, that’s the distance from San Diego to San Francisco or from Detroit to New York City, without having to stop for fuel.

Built at the Jefferson North Assembly Plant in Detroit, Mich., the new 2011 Dodge Durango arrives in showrooms in the fourth quarter of 2010.