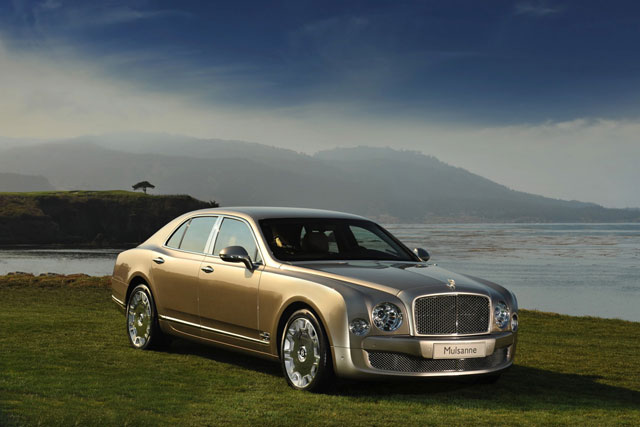 When it comes to Bentleys, new models are a big deal, simply because the automaker’s portfolio is so exclusive. The aging Arnage has been with us for quite some time now, and now the new Grand Bentley, the 2011 Mulsanne, has been revealed. The official debut took place at this past weekend’s Pebble Beach Concours d’Elegance, but the full details of the Mulsanne will not be released until next month’s Frankfurt Motor Show.

As of this writing, we know that the Mulsanne will be powered by some sort of V-8 engine when it goes on sale in mid-2010. Bentley says that this car is "neither an evolution of revision" of the Arnage, and that it was inspired by the original eight-liter Bentley of 1930-31, which at the time, was conceived as the world’s largest and most luxurious automobile.

We’re sure that the Mulsanne will be nothing short of elegant, in true Bentley fashion, and we’ll have the full details from next month’s Frankfurt show. In the meantime, click through the post to read all of the details that Bentley has released at this time.

• Name will be 2011 Bentley Mulsanne
• Car is not a replacement for Arnage. While Arnage ends production this year the Mulsanne will be positioned "at the pinnacle of the ultra-luxury segment"
• The Mulsanne was inspired by the 8-litre Bentley of 1930-31, which at the time was the largest and most luxurious automobile in the world and was conceived as a halo car at the top of the Bentley range
• Mulsanne is an entirely new car, designed, engineered and to be manufactured at our factory in Crewe, England
• We can confirm that the engine will be a V8, but further details won’t be revealed until Frankfurt
• Mulsanne is neither an evolution or revision of Arnage. We’ve created something unique, embodying the spirit of W.O – drawing on his passion for performance – and exemplifying the luxury and refinement Bentley is renowned for.
• Our ambition was to set new levels of comfort, acceleration and refined enjoyment – positioned at the very pinnacle of the luxury sector. That meant completely redesigning the famous 6.75L V8 and replacing every significant part to improve acceleration, performance throughout the range and fuel efficiency and emissions. It is a state-of-the-art engine with advanced technical features which are ground-breaking for the company and the ultra-luxury sector.
• The result is an engine that the offers the effortless wave of torque for which Bentley is renowned….power and performance whenever the driver demands it.
• Classic Bentley design language, including the muscular, sporting lines of the rear haunch and flowing lines that create a sense of power and speed, form an integral part of the Mulsanne’s appeal.
• Mulsanne will offer customers unsurpassed levels of exquisitely handcrafted wood, leather and brightware – unrivalled Crewe craftsmanship.
• The Mulsanne name reflects Bentley’s sporting pedigree, our passion for power and speed. Nowhere reflects that heritage better than Le Mans and the famous 90 degree corner a the end of the straight, a name which is synonymous with the Bentley marque.
• Car launched at the Pebble Beach Concours D’Elegance, Monterey California on 16 August 2009 at 12:00. It goes on sale in mid-2010 and we will offer a further opportunity to discuss powertrain, chassis and individual features at the Frankfurt show this September.
• A key discussion point is the fully-restored Bentley 8-litre we will display at Pebble Beach. This car was arguably W.O Bentley’s finest work as it was designed and engineered without compromise….the new Mulsanne reflects that spirit to design and engineer without compromise.
• Just 100 examples of the 8-litre were built (1930-1931) and they’re regarded as the last ‘pure’ grand Bentley before the company was acquired by Rolls-Royce. The new Mulsanne, designed and engineered at Crewe from the ground-up, reaffirms our ability and desire to build a new generation of pure, grand Bentleys.

The Mulsanne is inspired by the company founder W.O. Bentley’s crowning achievement in1930, the 8-litre. And it was W.O.’s own carefully preserved company car that shared the podium with the new Mulsanne in Pebble Beach. This early motoring masterpiece represented the last big Bentley that was designed, engineered and built from the ground up by Bentley engineers – until now.

Nearly 80 years later, while paying respect to this illustrious past, the new Mulsanne is a thoroughly modern statement of luxury driving and grand touring. Conceived, styled and engineered entirely at Bentley’s headquarters in Crewe, England, the Mulsanne, with its completely new platform, goes into production next year in a new state-of-the-art manufacturing facility within the Crewe factory.

"The challenge we set our engineers was to create a grand new Bentley that would stand as the pinnacle of British luxury motoring, offering the world’s most exclusive driving experience. They have responded to this challenge with real passion and the result is a luxury grand tourer that sets new standards in terms of comfort, effortless performance and hand-crafted refinement – the very qualities for which Bentley is renowned."

The Bentley design team, lead by Dirk Van Braeckel, have created a flagship that offers the classic sporting, styling cues long-associated with Bentley – expressed in a thoroughly contemporary way.

"From the very first hand sketches in the styling studio, we were inspired by the traditions of the grand touring Bentley limousines and have sought to evolve this story for a new generation of Bentley enthusiasts."

The return of the Mulsanne name to a car carrying Bentley’s iconic ‘Winged B’ emblem underlines the company’s racing pedigree and nowhere reflects that heritage better than the famed Le Mans circuit, the scene of no fewer than six Bentley triumphs. Few places offer a stronger or more emotive connection with the Bentley marque than the famed Mulsanne corner.

The Bentley 8-litre displayed alongside the Mulsanne in California was first shown at the 1930 London Motor Show. It was the second-built and was W.O. Bentley’s company car for two years. Capable of reaching more than 100 mph, the 8-litre demonstrated W.O. Bentley’s ambition and ability to build a grand luxury car capable of surpassing every other leading manufacturer of the day. A total of 100 cars were built in 1930 and 1931.

"The 8-litre’s breathtaking performance and quality was perhaps the finest example of a ‘pure’ grand Bentley. Every mechanical detail carried W.O. Bentley’s unique stamp and it was the clearest demonstration of a car built without compromise," commented Dr. Ulrich Eichhorn, Member of the Board Engineering.

"The Mulsanne has been designed with exactly the same guiding principles, so it is entirely fitting that these Bentleys from different eras share the same stage."

The Bentley Mulsanne will go on sale from mid 2010. It will also be displayed at the forthcoming IAA Frankfurt Motor Show (15-27th September, 2009) where Bentley Motors will provide additional product information.