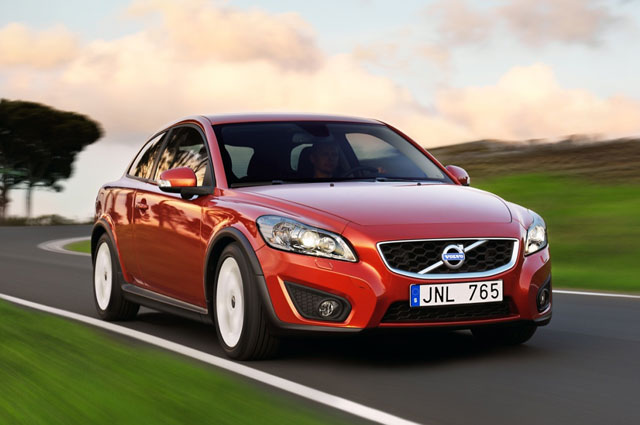 Just like the larger C70 convertible, Volvo’s funky C30 hatchback will receive a funky new front end for the 2010 model year. The revised hatch will make its official debut at the upcoming Frankfurt Motor Show, but we’ve got the official images and details ahead of time.

Obviously, the new nose takes its design cues from Volvo’s new styling language first seen on the XC60 crossover. The larger headlamps, more curvy grille, and larger foglamp surrounds give it a more robust appearance, though as with the XC60 and C70, we think it’ll only prove to be a love/hate relationship with enthusiasts.

What else is new for 2010? Not much. The rear styling stays the same, which isn’t necessarily a bad thing, and we can look forward to seeing a few more paint options, as well as a sport package which lowers the C30’s ride height by ten millimeters, quickens the steering ratio, and offers stiffened brushings, dampers, and stabilizer bars.

Volvo Car UK has announced first details of the new Volvo C30 SportsCoupe. Offering a radical new frontal and rear appearance and available with an all-new Sports chassis, the new C30 looks set to capitalise on the success of its predecessor. The new Volvo C30 will be unveiled to the world at the Frankfurt Motor Show in September and will go into production this November.

Major exterior changes
The front of the Volvo C30 has been redesigned giving the car a radical new appearance. Body panel changes, including the wings and bonnet, create a distinctive personality whilst closely aligning it to the S60 Concept and recently announced new C70.

"The front of the Volvo C30 has become more dramatic and expressive. The angled lines of the front bumper together with the new headlamps, which are drawn offset and up, reinforce the impression of speed and sportiness," says Fedde Talsma, Exterior Chief Designer at Volvo Cars.

In the grille sits the new, larger iron mark, as seen in the rest of the Volvo range. The air intake has also been enlarged and resembles the intake in the XC60. The grille also has a new honeycomb pattern, unique to the C30.

Although the biggest design changes have taken place at the front, the rear also sports a similar range of updates, including a new colour-coded rear valance that is available in body colour or, to add a dramatic twist, in a contrasting colour.

Other new exterior features include the introduction of a vibrant Orange Flame Metallic colour, visible exhaust tailpipes in the T5 and D5 models, two new wheel options, including a striking white wheel alternative and the choice of five different colours on the lower trim from the new C30 Contrast Colour Collection, such as Blackcurrant, Java and Shadow Blue.

New expressive accessory styling kit
A new accessory styling kit has been introduced to give the Volvo C30 even more sporting attitude. The kit includes foglamp décor, a front skidplate, side scuff plates and a rear skidplate with an aluminium look. For D5 and T5 variants, two 90 mm tail pipes in polished stainless steel are added to highlight the powerful engine.

Matching interior updates
The new Volvo C30 also offers a range of new interior options. There is now an all-new colour combination, Espresso/Blond, consisting of a dark brown upper section and a blond, fresh shade on the lower door sides. The blond tone is a grey/beige colour and is an expression of Volvo’s strong Scandinavian design tradition. The Espresso/Blond interior gives customers the opportunity to specify the new, bright accent colours which include orange, green and blue in the fabrics, as well as a new Cranberry colour for leather upholstery.

"We want to give customers the opportunity to decide for themselves what their car looks like. The new C30 gives them a range of fresh, modern style cues in terms of colour and fabric to choose between," explains Maria Uggla, Program Chief Designer Colour & Trim at Volvo Cars.

New Sport chassis
To compliment the Volvo C30’s new dynamic style, an optional Sports chassis will be available which gives the C30 a significantly sharper ride. The introduction of the Sports chassis means the car is lowered by 10 millimetres, resulting in a lower centre of gravity enhancing the driving characteristics. The steering is more precise owing to the installation of stiffer bushings. The steering ratio is lower, giving a 10 percent faster response to steering wheel input. Spring stiffness has been increased by 30 percent to deliver a more dynamic ride. The dampers too are stiffer and are designed to build up pressure more quickly. The roll stabilizers are also stiffer to reduce any leaning tendency when cornering. The new sport chassis is available as an option in all C30 variants except with the 1.6D DRIVe with Start/Stop. (More information on the new Sport chassis to follow).

Drivelines
The new Volvo C30 will be available with a wide range of drivelines, including the new 1.6D DRIVe with Start/Stop which offers impressively low fuel consumption.

Further pricing and specification details
Full details, including prices and specification, will be released closer to the on-sale date. First vehicles are expected to be in showrooms and delivered to customers in early 2010.