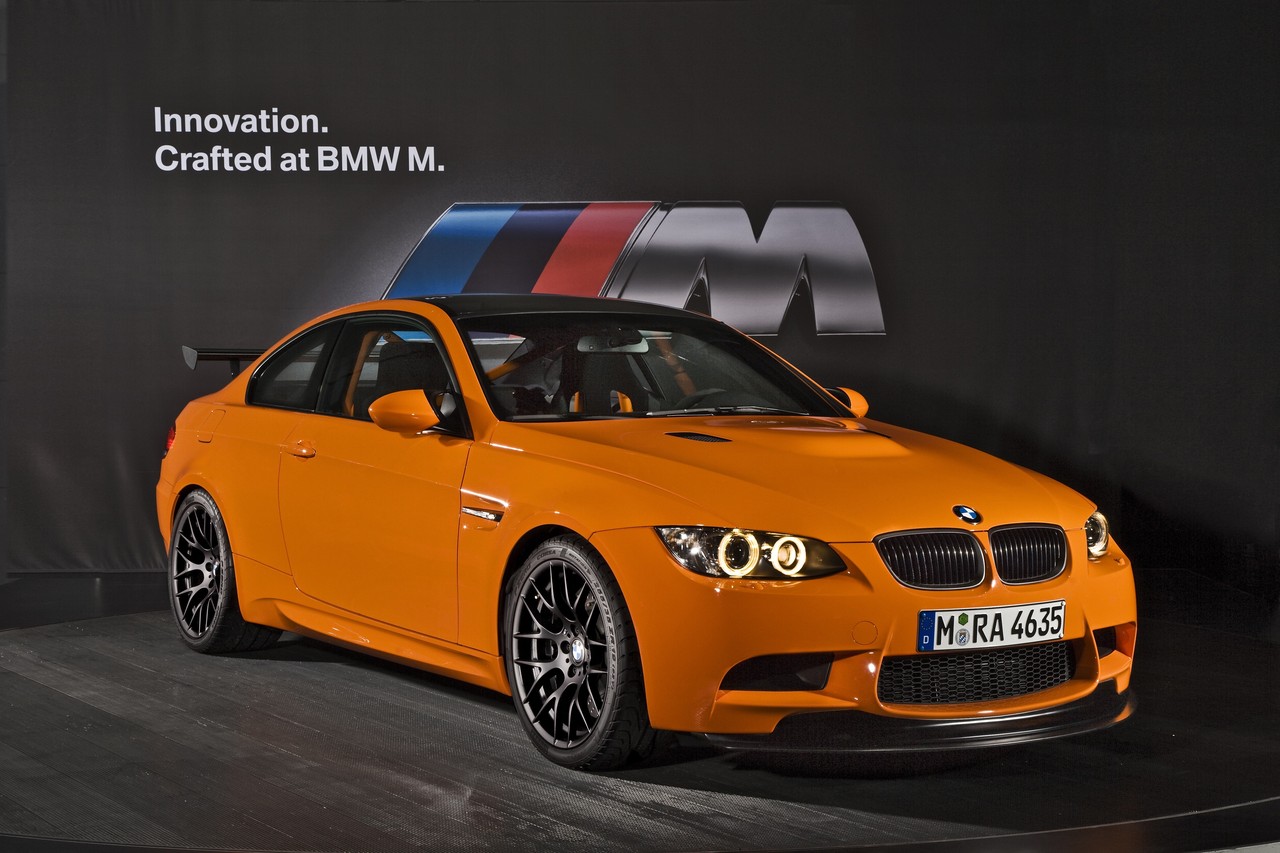 At long last, a hardcore, track-ready version of the latest BMW M3 Coupe has been released, set to go on sale in the Spring of 2010. But unlike the M3 CSLs of the E46 generation, this new M3 GTS is significantly lighter, more powerful, and has a long list of track-friendly upgrades.

Under the hood, the standard 4.0-liter V-8’s displacement has been increased to 4.4 liters, meaning output has been increased from 414 to 450 horsepower. All of that shove is being routed to the rear wheels via BMW’s M DKG Drivelogic dual-clutch gearbox, though the characteristics have been specially tuned to match the GTS’s extra power and performance.

Power upgrades are one thing, but when it comes to track cars, lightness is key. The M3 GTS weighs slightly less than 3300 pounds, and while that may seem pretty porky, remember that the standard M3 Coupe is around 400 pounds heavier. What’s more, the GTS uses a heavily upgraded suspension and high-performance brakes, along with special nineteen-inch wheels. Naturally, another strong point of the GTS’s performance is in its aerodynamics, and with just a quick glance at this car, it’s easy to see that the aero design is heavily based on World Touring Car Championship vehicles, like the 320si.

We’re putting on our Pilotis and helmets in anticipation of a track day with this hot little number. No word on pricing has been released at this time, but for the full details, click through the post to read BMW’s press release.

BMW M GmbH now offers a truly outstanding performer based on the BMW M3 Coupé also ideal for Clubsport events – exactly the right car for the truly discerning customer demanding the very utmost in terms of power and performance. The BMW M3 GTS is largely hand-built by the most skilled craftsmen at BMW M GmbH as a perfectly harmonised package of outstanding modifications, with production exclusively to the customer’s personal order. Focused on motorsport, the modifications comprise both the drivetrain, the suspension and the body of the car, as well as its interior. Market launch of the BMW M3 GTS will be in spring 2010.

Offering this truly exclusive model for the genuine motorsport enthusiast, BMW M GmbH is continuing a great tradition introduced on former generations of the BMW M3. Once again, the outstanding sports potential of the BMW M3 is being consistently enhanced and upgraded to an even higher level, the customer benefiting from the Company’s wide range of know-how in the development and production of racing cars. Through its race-oriented modifications enhancing both performance and safety, the BMW M3 GTS is ready to go in Clubsport events on the track and comes with the option for homologation on the road. So that the driver is able to make his way to the race track in the very same car he will use for racing.

Consistent lightweight construction, adjustable aerodynamic units, an increase in engine size and output on the V8 high-speed power unit and suspension technology meeting all the requirements of motorsport – all this gives the BMW M3 GTS a top position among high-performance cars built for Clubsport racing. Unladen weight according to the DIN standard is less than 1,500 kg (3,300 lb), the lightweight body comes with special mounts for six-point seat belts and a rollcage fitted behind the B-pillar.

Through its design and construction, the materials used and its special equipment, the BMW M3 GTS is a lightweight performer all the way, offering a genuine motorsport driving experience in every respect. In addition to the carbon fibre roof already featured as standard on the BMW M3, weight is consistently optimised by features such as silencers made of titanium, the extra-light centre console and door linings, the omission of rear seats, automatic air conditioning and an audio system, as well as sound insulation tailored specifically to this very special model.

The eight-cylinder power unit of the BMW M3 GTS enlarged in size to 4.4 litres and boosted in output to some 450 hp boasts construction principles and technical details carried over directly from motorsport. A supreme surge of ongoing power throughout a wide range of engine speed characterises the outstanding performance of the V8 with its high-speed concept. The features typical of a motorsport engine include the crankcase made of a special aluminium-silicon alloy and constructed in bedplate design, individual throttle butterflies, anti-knock sensors with ion flow technology, and, wet sump oil supply optimised for supreme driving dynamics.

Power is transmitted in the BMW M3 GTS by the M double-clutch gearbox with Drivelogic also available as an option on the regular production model. This seven-speed M DKG Drivelogic gearbox follows a principle also developed for motorsport, shifting gears without the slightest interruption of engine power. The transmission was developed specifically for a particularly powerful high-speed engine and offers ideal qualities for truly dynamic acceleration at all times. The gearshift characteristics on the seven-speed M DKG Drivelogic have been tailored specifically to the modified power unit of the BMW M3 GTS and the driver is able to shift gears both through the selector lever on the centre console and through special M shift paddles on the steering wheel.

To convey the supreme power of the engine to the road in equally supreme style even under the most extreme conditions, the BMW M3 GTS comes with suspension technology likewise derived from the highest realms of motorsport. While the suspension is based on the front and rear axle of the BMW M3 Coupé, the rear axle subframe is bolted firmly in position and the suspension features adjustment threads on the dampers for individual variation of the inbound and rebound strokes.

To optimise the flow of air and adjust the car’s downforce as required, the BMW M3 GTS comes with a race-oriented front air dam and rear wing. This allows appropriate adjustment of the car’s aerodynamic qualities in motorsport and for other purposes, tailored to the specific profile of the respective track. The air guidance units on the front air dam, for example, may be varied in their geometry, just like the position of the rear wing based on the wing already featured on the BMW 320si raced in the WTCC World Touring Car Championship.

Exterior features such as the BMW kidney grille and the gills at the side finished in chrome on the regular BMW M3 come in special dark eloxy-plated chrome on the BMW M3 GTS.

The interior of the BMW M3 GTS clearly reflects the focus on supreme performance and safety on the race track. The interior features include classic bucket seats, interior trim in carbon and an M steering wheel finished in alcantara. The door and side panels at the rear also come in alcantara, while six-point seat belts delivered with the car for subsequent use, a fire extinguisher and preparation for an emergency-off switch in motorsport round off the wide range of special features inside the car.