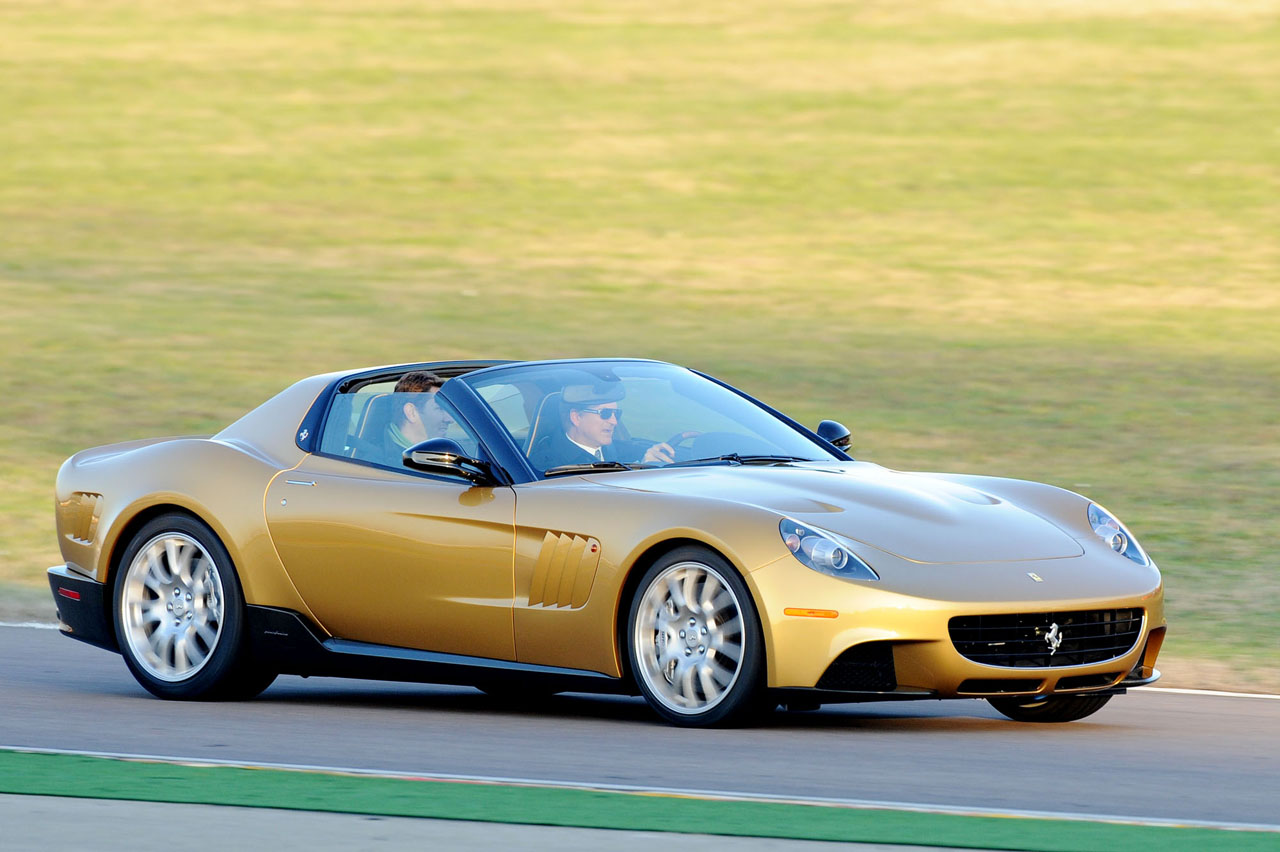 The first example of Ferrari’s Special Projects program was the illustrious P4/5 Pininfarina designed and engineered exclusively for Jim Glickenhaus, which we had the chance to review way back in Issue 15 of Winding Road. The second car from Ferrari’s one-off engineering team is finally ready for the streets — the P540 Superfast Aperta, created exclusively for customer John Walson.

The P540 started as, you guessed it, a 599 GTB Fiorano, and was inspired by a 1968 Ferrari built specifically for the 1968 film Toby Dammit. Since the 599 only exists as a coupe, a lot of effort went into strengthening the chassis during the development process while still managing to keep the overall weight down. Gold cars aren’t always our favorite things here at Winding Road, but there’s no doubt that the P540 is quite stunning.

The whole production cycle of the P540 Superfast took a total of fourteen months. We wish Mr. Walson many happy days of motoring in this fabulous new one-off Ferrari. Scroll down to read Ferrari’s official press release.

The first shake-down has been held at Fiorano of a very special one-off, the P540 Superfast Aperta, built for an American client. The car, the second in a new Special Projects programme created by Ferrari to meet requests from the most discerning clients and collectors to create truly unique models, is based on the 599 GTB Fiorano and was inspired by a Carrozzeria Fantuzzi-designed Ferrari built specifically for the 1968 Fellini film, Toby Dammit, itself inspired by one of the tales of Edgar Allan Poe.

The P540 Superfast Aperta’s proud new owner, Edward Walson, son of John Walson, the inventor of cable TV, approached Ferrari in 2008 to produce a modern reinterpretation of the gold-coloured car in the film. "I had always dreamed of designing sports cars," Walson explains, "and when I saw this film the decision came of its own accord: one day I would have ‘my’ Ferrari."

In accordance with the Special Project’s approach to producing such individual one-offs, the P540 Superfast Aperta respects all existing international safety and homologation requirements and is thus road legal. The car was designed by Pininfarina and built in Maranello, and the client was directly involved in each stage of its development. As the 599 GTB Fiorano donor car is a coupé, considerable effort went into strengthening the chassis by using finite element analysis in development and the increase in weight was kept down to just 20 kg by employing carbon-fibre extensively. From the initial sketches to the final, road-legal car took just 14 months.

As the client took delivery of the car at Fiorano his excitement was understandable: "This is the most special Christmas present of my life."

This special car’s colour was inspired by the film "Toby Dammit", one of the three episodes of the film "Histoires Extraordinaires" made in 1968 based on stories by Edgar Allan Poe.

"Toby Dammit", the third of the three episodes, directed by Federico Fellini, with Terence Stamp Salvo Randone and Milena Vukotic, based on the story "Never Bet The Devil Your Head".

The other two episodes, "Metzengerstein" and "William Wilson", were directed by Roger Vadim and Louis Malle.