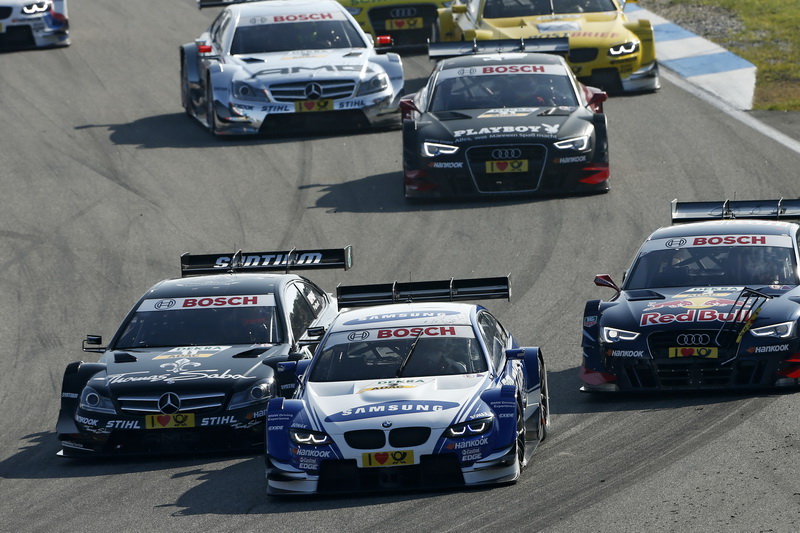 Officials from German touring car series DTM, along with co-organizers Grand-Am and International Motor Sports Association, have announced intentions to bring the race series to North America.
DTM could arrive here in the US as early as 2015, possibly running as part of United SportsCar Racing event weekends.
Next, the organizers will work with manufacturers to get them on board. Audi, BMW, Mercedes-Benz, Honda, Nissan, and Toyota are already involved with the existing series, and event organizers hope to reach out to American automakers such as Cadillac, Lincoln, and Dodge SRT to expand the possible field.
We’ve got our fingers crossed that it all works out. We’ve always loved gawking at all the great DTM cars from across the pond.
Scroll down for more details in the press release, below.
DTM goes USA – cooperation with GRAND-AM and IMSA
Exploring an opportunity that could additionally change the face, and the future, of road racing, GRAND-AM Road Racing and the International Motor Sports Association (IMSA) tonight announced a license and cooperation agreement with the Internationale Tourenwagen-Rennen (ITR e.V.), which administers DTM racing.
The collective goal is a North American version of DTM, the popular German touring car series. Representatives from all three organizations gathered for the announcement during a press conference at the InterContinental New York Times Square Hotel’s Gotham Ballroom, an event highlighted by GRAND-AM founder Jim France and ITR Chairman Hans Werner Aufrecht signing the agreement.
The earliest the new series would begin would be 2015, possibly running as part of United SportsCar Racing event weekends. United SportsCar Racing was announced March 14 as the name of the new series resulting from the merger of GRAND-AM and the American Le Mans Series presented by Tequila Patrón. IMSA will serve as the sanctioning body for United SportsCar Racing, which also was announced on March 14.
“On the heels of our United SportsCar Racing and IMSA announcements, reaching this agreement adds to the momentum we’re experiencing right now,” GRAND-AM President and CEO Ed Bennett said.
“The next steps in this process will involve further discussions with various automotive manufacturers, whose commitment to this concept is essential if a North American DTM-style series is to become reality.”
If realized, a North American version of DTM would join the current Europe-based DTM and Japan-based Super GT platforms. DTM is administered by ITR e.V., Super GT by GT Association (GTA). ITR e.V. and Super GT agreed last October to a cooperation starting in 2014.
“The new technical regulations and the formed partnerships represent – for the first time in the history of the sport – a global platform for the manufacturers involved,” said Hans Werner Aufrecht, “a platform offering them the opportunity to race – on the same technical basis and with the best global promoters as guarantee for a competitive and attractive platform – in the core markets of North America, Europe and Asia.
“In addition to the six German and Japanese manufacturers – Audi, BMW, Mercedes-Benz, Honda, Nissan and Toyota – which are already involved, the new cooperation quite obviously also offers a new and extraordinary field of activity for the American premium manufacturers such as Cadillac, Lincoln or Dodge SRT within the framework of future motorsport programs. Now, we have to inform and thrill them together with our new partner GRAND-AM/IMSA and encourage them to get involved.”
Said GTA Chairman Massaki Bandoh: “The new partnership between the parties will further increase the value of DTM, GRAND-AM, IMSA and SUPER GT. This would be the opening of the doors for globalization of GT/Touring car races. We have to take this opportunity to cooperate with each other.”
European automobile manufacturers responded optimistically to news of the agreement, acknowledging the importance of the U.S. market to their businesses and the direct link DTM-style racing would create with consumers.
“This offers the opportunity to use the Audi RS 5 DTM in a premium race series not only in Europe but in Asia and North America too, in the future,” said Wolfgang Dürheimer, Audi AG’s Board of Management member Technical Development. “For Audi as a globally operating company, this development represents an exciting and interesting option.”
Jens Marquardt, BMW’s motorsport director, said his organization “welcomes the planned cooperation between DTM and GRAND-AM/IMSA. It represents another important step on the way to the internationalisation of DTM. We as BMW are extremely open-minded, regarding these plans. The North American market represents the biggest market area for BMW in general – and the biggest market area for BMW M vehicles, too. BMW has got a great motor-racing tradition in the USA and therefore, we are truly happy about the prospect to also see DTM vehicles racing in the USA, in the future.”
“For Mercedes-Benz, the U.S. represents the biggest market area worldwide,” said Toto Wolff, Head of Mercedes-Benz Motorsport. “We are particularly delighted about the long-term cooperation deal between DTM and GRAND-AM/IMSA. Thanks to the technical basis agreed upon, we will be offered the opportunity to use our DTM cars to also demonstrate the competitiveness of our brand on U.S./North American race tracks, in the future.”
Sports car racing legend Hans Stuck, now the president of Germany’s motorsports governing body, Deutscher Motor Sport Bund (DMSB), considers the current DTM competitive environment a template for success. “If you want to hold motor-racing events in car nations such as Germany or the U.S., your grid must feature cars that have what it takes to fascinate the crowds,” Stuck said. “The technical DTM regulations that were developed by DMSB in close cooperation with the car manufacturers involved – Audi, BMW and Mercedes-Benz – combine this guideline with an extremely high safety level that also represents an international benchmark. We are delighted that these regulations will be used not only in Europe, in the future, but also in Japan and the U.S.”
Tags:
BMWGRAND-AMMercedes-Benz