Detroit 2011: Mercedes-Benz To Drive Hydrogen-Powered B-Class Around The World 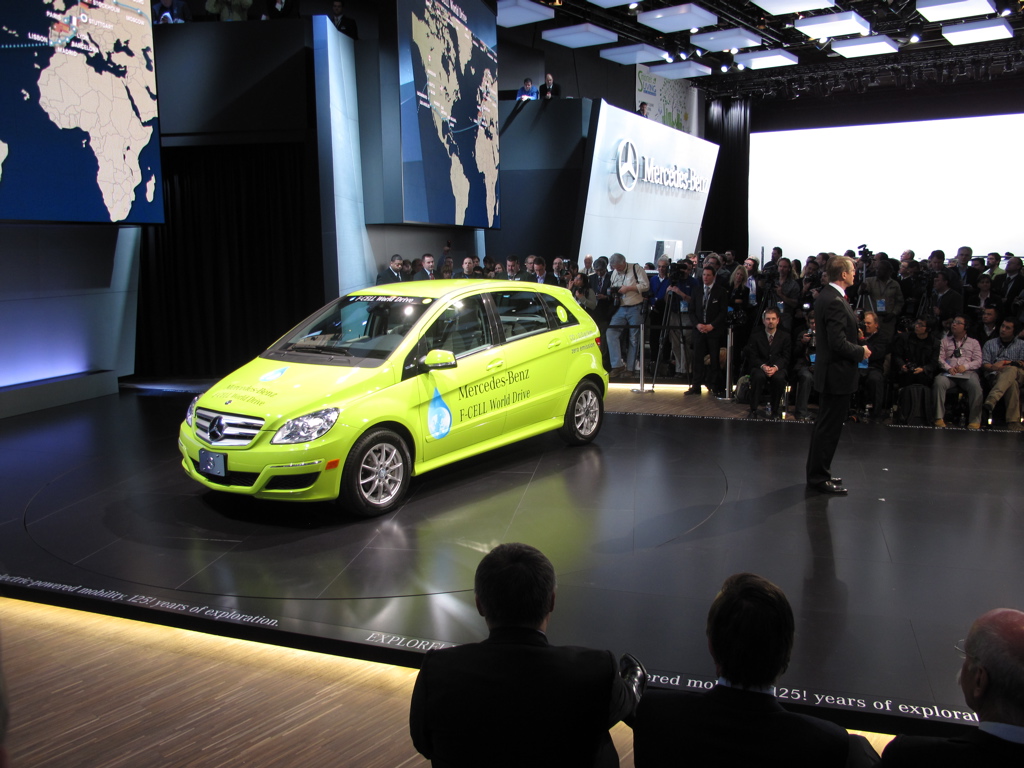 Mercedes-Benz clearly believes in the long-range viability of hydrogen technology. The company announced plans to drive its F-Cell hydrogen vehicle—based on the European B-Classs—around the world in some 125 days. (Phileas Fogg has nothing to fear from the impish M-B, it seems.)

With short refilling times, a 240 mile driving range (based on the Euro cycle), and emissions-free motoring, Mercedes believes that the F-Cell is well suited to both long-range travel, and everyday driving needs.

But wait, you might very well ask, how will the F-Cell team source exotic hydrogen when traversing the wilds of Russia, China, or even wide-open Australia? Surely the worldwide hydrogen grid isn’t so complete at this early stage, right? Well, yes. The F-Cell will rely on a handy tanker truck full of hydrogen for, “remote routes.” Don’t expect a hydrogen car in your driveway next year then, we’d guess.

Scroll down to read the full Mercedes-Benz press release.

Detroit – At the end of January Mercedes-Benz will kick-off an unparalleled long-distance journey – the F-CELL World Drive. Announced by Mercedes- Benz at the North American International Auto Show in Detroit, the journey will circumnavigate the world with the first series-produced fuel cell vehicle, the B-Class F-CELL. The aim of the F-CELL World Drive is to demonstrate the efficiency and everyday drivability of fuel cell technology, and at the same time campaign for the development of a global hydrogen filling station network.

To demonstrate the technical maturity of the B-Class F-CELL – which offers local and long distance emission-free driving – Mercedes-Benz will begin the F-CELL World Drive in the B-Class F-CELL on January 30. The journey will last 125 days, driving through four continents and the widest variety of climate zones as well as an equally diverse mixture of routes, ranging from asphalt streets to unpaved roads. "With this unique circumnavigation of the world we are emphasizing the high level of technical maturity of our electric vehicles with fuel cell. Such an undertaking would not be possible, using purely battery-powered electric vehicles.", explains Dr. Thomas Weber, Member of the Board of Management of Daimler AG responsible for Group Research and Development Mercedes-Benz Cars. "Today, as with the invention of automobile 125 years ago, the issue of a corresponding fuelling infrastructure arises. I am confident that together with all of the parties involved we will find a solution that enables us to fully exploit the tremendous potential of this technology." The exceptional long-distance journey will take the fuel cell vehicles through 14 countries: from southern Europe, through France, Spain and Portugal, the cars will continue on to North America, where they will drive through both the USA as well as Canada. After crossing Australia the cars will reach the continent of Asia. From China they will then pass through Kazakhstan, Russia and finally northern Europe, until the tour returns to Stuttgart at the beginning of June, where the 125-day round-the-world tour will come to an end.

Around the world with hydrogen

The B-Class F-CELL combines a high, emission-free range of around 240 miles (Euro driving cycle, 190 miles estimated EPA) with short refilling times and is accordingly highly suitable for both everyday driving in urban areas as well as longer journeys. At the heart of the B-Class F-CELL is the new-generation electric drive system powered by a fuel cell, which is compact, powerful, safe and fully suited to everyday use. The fuel cell generates the electrical power on board from a chemical reaction between oxygen and hydrogen.

Mercedes-Benz has adopted a clever solution for the lack of hydrogen filling stations along the route: acting as the exclusive supplier for hydrogen is the project partner Linde AG, which will guarantee a reliable supply thanks to its sites and subsidiaries located throughout the world. On remote routes a tanker vehicle, which has been specially developed for the tour in cooperation with Linde AG, will also be on hand to supply the fuel cell vehicles with the necessary hydrogen.