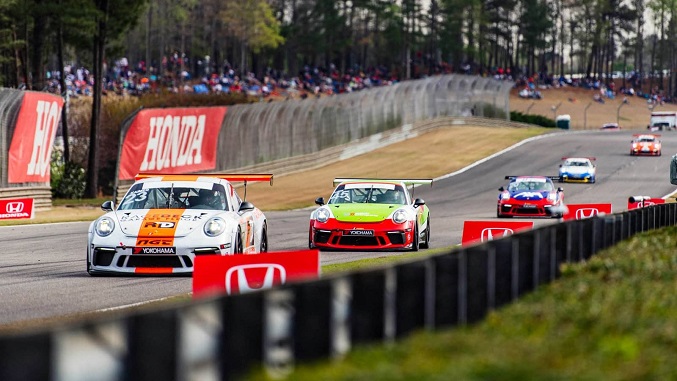 This looks enticing; another way to get behind the wheel of some rear- and mid-engine monsters. Split into three classes, of which each contains a spec car that’s already well-raced throughout the world, Porsche Sprint Challenge events will team up with IMSA, IndyCar, and SRO to offer eight events next year, at a great selection of tracks. Sadly, none of the events will be on the West Coast. Regardless, we’re keeping an eye on this one

Check out the press release:

INDIANAPOLIS, Indiana, November 2, 2020 – Porsche Motorsport North America (PMNA) further strengthens its Motorsport Pyramid on the continent with the announcement of the Porsche Sprint Challenge North America by Yokohama. Following the September 25 unveiling of the Porsche Carrera Cup North America as the premier one-make championship in the United States and Canada, the new series, which will utilize previous generations Porsche 911 GT3 Cup race cars and current generation GT4 cars, will take its place as the direct feeder to Carrera Cup beginning in 2021. With the Trophy level being eliminated from the Porsche Motorsport Pyramid North America, this championship breaks new ground for Porsche as the German sports car manufacturer has commissioned the United States Auto Club (USAC) to manage all aspects of the 16-race schedule. Yokohama has been selected as the series official tire partner and presenting sponsor of the Porsche Sprint Challenge. Erik Skirmants has been appointed Series Manager.

The Porsche Sprint Challenge by Yokohama (http://www.porschesprint.com/) will be a stepping stone on the Porsche Motorsport Pyramid North America between the Clubsport/club racing entry stage and the Carrera Cup North America. The series will be broken into three classes: Platinum for Porsche 911 GT3 Cup (type 991.2) race cars, Gold for type 991.1 generation Porsche 911 GT3 Cup cars and the Silver Class for the mid-engine Porsche 718 Cayman GT4 Clubsport. Driver and Team Championships will be awarded with the Platinum and Silver Driver Champions being invited the Porsche Night of Champions in Weissach, Germany.

USAC is one of the leading motorsports organizations in the USA with series oversight on many racing fronts including circle track, rally, off-road, snowmobile, karting and youth racing in its portfolio. While widely known as the pinnacle short-track and dirt racing series in the country, USAC previously conducted the United States Road Racing Championship from 1958 – 1962 and makes its return to road racing with the Porsche Sprint Challenge.

The inaugural season of the Porsche Sprint Challenge North America will kick-off at Florida’s Sebring International Raceway in March 2021 and hold its finale in October at the iconic and prestigious Indianapolis Motor Speedway – just yards from USAC headquarters in Speedway, Indiana. Eight event venues will offer two races per weekend for competitors. Seven of the eight weekends will count toward the championships in Platinum, Gold and Silver as well as the Team title chase. The Mont Tremblant weekend will not count towards the championship. This round is a “prelude” event to introduce Canadian competitors to the Porsche Sprint Challenge.

Four of the eight event weekends are paired with SRO World Challenge, a USAC-sanctioned series, where customer teams can compete with Porsche 911 GT3 R and Porsche 718 Cayman GT4 Clubsport race cars. The 911 GT3 R fits as the highest level of Porsche customer racing on the Porsche Motorsport Pyramid in North America. Other event weekends include pairing with IndyCar and IMSA events.

All racing action will be seen live on FLO Sports, an innovator and leader in streaming live sporting events with a library of over 300,000 hours of premium content, including the home of ECHL and NCAA Division 1 Hockey, US coverage of the Tour de France and the world leader in wrestling coverage. The addition of the Porsche Sprint Challenge will bolster its racing platform which includes nearly 800 live racing events annually.

Daniel Armbruster, President and CEO, Porsche Motorsport North America.
“The addition of the Porsche Sprint Challenge North America by Yokohama to the Porsche Motorsport Pyramid continues our effort to offer a clear and competitive path for everyone wishing to race GT cars. We believe that this step provides a place to compete whether you are moving up the steps or want to find a more structured and competitive environment than track days or club racing can provide. Additionally, this gives us the opportunity to continue our long relationship with Yokohama. They have been a tremendous partner and we believe will continue to play an instrumental part in the development of young drivers. We are also pleased to have our first partnership with USAC. They have shown to be the stepping-stone in American open wheel racing for generations and will now play that role in sports car racing. We will have a very busy 2021 and I am excited for Porsche, our partners, customers and fans.”

Erik Skirmants, Series Manager, Porsche Motorsport North America.
“Our goal with the Porsche Sprint Challenge North America by Yokohama is to create a clear first step up from club level racing while establishing a direct path to the new Porsche Carrera Cup North America. The series will be an excellent mix of a destination series for gentlemen drivers as well as a development platform for new drivers. We are taking the best of what we have learned in North America’s prior Challenge and Trophy series, and features of some global Sprint Challenge series to create the best competition environment possible.

A key to success is the choice to have Yokohama as our tire and series partner. We needed world class tires and technical support and Yokohama has always exceeded expectations as a partner. All of this results in the ideal opportunity for USAC to return to road racing and we are pleased that Porsche gets to start this new era with them. All series partners have worked closely with our teams and drivers to build a model with a clear intent to lead the North American market in balancing cost while maintaining a professional racing environment. We are excited to get underway in 2021.”

Kevin Miller, President & CEO, United States Auto Club.
“The United States Auto Club is proud to partner with Porsche and Yokohama Tire to bring the global Porsche Sprint Challenge to North America. USAC has a 65-year heritage in recognizing national championships. We are looking forward to adding the Porsche Sprint Challenge North America champions to our storied list in 2021.”

Andrew Briggs, Vice President of Marketing and Product Management, Yokohama Tire.
“This exciting, new USAC-sanctioned series fits our motorsports strategy perfectly and is an excellent opportunity to continue our longtime partnership with Porsche Motorsport North America. We’re honored to be a part of the inaugural Porsche Sprint Challenge North America by Yokohama and looking forward to spotlighting our ADVAN® tires next season.”

Learn more about the Porsche Sprint Challenge by Yohohama at:
http://www.porschesprint.com/ .

* Prelude event, does not count towards 2021 Championship.

WRR TV: Why Even Pro Drivers Are Running ChampCar