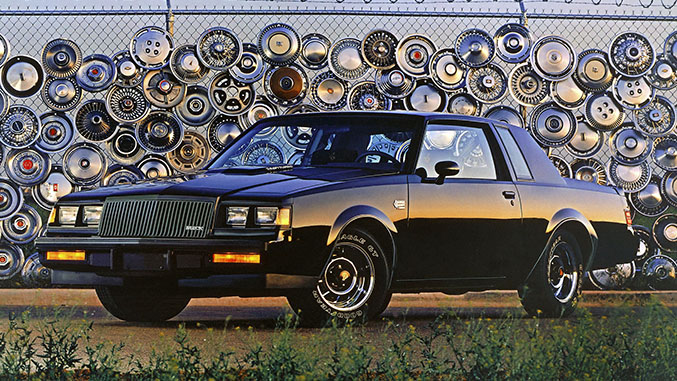 Generally speaking, the large-displacement muscle car era gradually came to an end in the late-1970s.  Consumer demand remained strong but the United States was still feeling shockwaves from the oil crisis that rocked the world in the middle of the 1970s, leading legislators to continuously push for ever-stricter emissions regulations.
Buick engineers wanted to keep building high-performance cars in spite of the restrictions placed on large engines.  They boldly set out to prove it was possible to go fast while keeping fuel economy in check by replacing raw displacement with forced induction.
Buick made its first steps in the world of turbocharging in 1978 when it offered the Regal and the LeSabre with a turbocharged 3.8-liter V6 engine.  Fitted under the hood of the Regal Sport Coupe, the mill made 150 horsepower when equipped with a double-barrel carburetor and 165 ponies when the optional four-barrel unit was ordered.  Engineers and buyers soon realized that the idea of turbocharging a Regal had its merits but the technology badly needed to be fine-tuned.

The first Grand National
Buick took home the NASCAR Winston Cup Series manufacturer’s title in 1981 and 1982, and it commemorated the occasion by launching a limited-edition version of the Regal called Grand National in 1982.  The first Grand National was little more than an appearance package that added a two-tone paint job accented with thin red stripes, edition-specific decals on the quarter panels and a spoiler mounted on the trunk lid.
Power came from a naturally-aspirated 4.1-liter V6 engine that produced a lackadaisical 125 horsepower.  The 1982 Regal Grand National came standard with a performance-tuned suspension, but even the most optimistic driver would have been hard-pressed to consider it a sports car.  A total of 215 1982 Grand Nationals were built, making it one of the rarest versions of Buick’s iconic coupe.
The Regal Grand National sat out the 1983 model year but it came back back with a vengeance in 1984.  The 125-horsepower mill was replaced by a fuel-injected 3.8-liter turbocharged V6 mill that made 200 horsepower at 4,000 rpms and a healthy 300 lb-ft. of torque at just 2,400 rpms.  Power was sent to the rear wheels via an automatic transmission.

Designers made sure it was impossible to mistake the Grand National for a stock Regal by painting every body panel and nearly every piece of trim in a glossy shade of black and by fitting 15-inch aluminum wheels.  The interior was upgraded with Lear Siegler seats and a bespoke plaque on the dash.
The Grand National was well received and Buick knew it had a very special car on its hands.  The hot-rodded coupe carried on unchanged for the 1985 model year.

In 1986, Buick made several upgrades to the Grand National to bump its power output to 235 horsepower and 330 lb-ft. of torque.  One of the most important modifications was the addition of an air-to-air intercooler that cooled the air going from the turbo to the intake manifold.  Other updates included a redesigned exhaust line, a tweaked turbo and revamped intake manifolds.
Saving the best for last
Power was again increased to 245 ponies and 355 lb-ft. of twist in 1987, boosting annual Grand National sales past the 20,000 mark.  Sales were partially driven by the fact that insiders knew 1987 would be the last year of the Grand National.
The G-Body Regal was being phased out in favor of the brand new W-Body model underpinned by a front-wheel drive platform that it shared with other members of GM’s vast lineup including the Chevrolet Lumina and the Pontiac Grand Prix.  Switching to front-wheel drive presented its faire share of advantages, but it also meant the end of the hot-rodded Regal because the chassis couldn’t adequately handle the Grand National’s power.
Buick understandably wanted what had become one of the most popular American sports cars of the 1980s to go out with a bang.  The automaker teamed up with McLaren Performance Technologies to build the final, most powerful evolution of the coupe called Grand National Experimental, or GNX in short.   The GNX was designed as a limited-edition collector’s car from the very beginning of the project.
Starting with a fully-loaded 1987 Grand National, Buick and McLaren added a more effective intercooler, a less restrictive exhaust line, a specific Garrett turbocharger with a lighter ceramic impeller and blueprinted cylinder heads.  The upgrades increased the 3.8-liter V6’s output to 300 horsepower and 400 lb-ft. of torque, enough to propel the GNX from zero to 60 mph in 5.5 seconds.

The automatic transmission was strengthened to handle the increase in power and the car was fitted with a longitudinal torque bar designed to keep the differential from spinning under heavy acceleration.  As a result, when the GNX accelerated before a run on the drag strip the torque bar caused the body to lift up, pushing down on the rear tires and giving the car full power the minute the driver’s foot was taken off the brake pedal.
Visually, the GNX stood out from a stock Grand National thanks to flares on the wheel arches, vents in the front fenders, a discreet GNX emblem on the radiator grille and 16-inch BBS alloy wheels mounted on VR-rated Goodyear tires.  The interior was fitted with a metal plaque on the dashboard and additional analog gauges that provided vital information about what was happening in the engine bay.
The Buick GNX cost $29,900 in 1987.  To put that figure into perspective, that same year a base-model Regal V6 cost $11,562 and a Corvette hardtop started at $27,999.  In spite of a lofty price tag, the 547 examples of the GNX that Buick announced it would build were spoken for before production got under way.
Tags:
BuickGNXGrand National