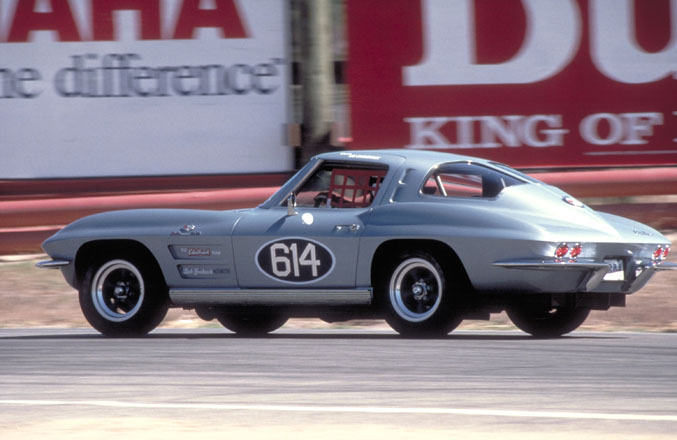 Unveiled last January at the Detroit Motor Show, the 2015 Chevrolet Corvette Z06 has been hailed as one of the most advanced sports cars ever manufactured by General Motors.   While the technology it packs is the fruit of decades of research on and off the track, the origins of the Z06 name go back to 1957 when the American Manufacturers Association (AMA) instated a prohibition-like ban on factory-backed racing.
Officially, the ban was introduced to protect the hoards of fans that routinely showed up to watch races.  The automotive world was still feeling shockwaves from the tragic accident that left 83 spectators dead when a Mercedes-Benz 300 SLR crashed and sent parts flying into the bleachers at the 1955 edition of the 24 Hours of Le Mans.
The ban meant automakers couldn’t officially run a racing program but it was loosely enforced at best and many companies circumvented it by surreptitiously racing through third parties.  Notably, the ban only applied to major automakers and it did not make it illegal for average citizens to tune their cars and hit the track.
Well-known engineer Zora Arkus-Duntov was understandably annoyed by the ban because he spent a good portion of the 1950s turning the Corvette into a world-class sports car.  He pushed for Chevrolet to continue the development of its flagship model by offering a factory-built racer that privateers could enter in national events with little or no modifications.  Called regular production option (RPO) Z06, the project was signed off in 1962 and its debut coincided with the launch of the new-for-1963 split-window Corvette Stingray.

The Z06 package brought a host of suspension modifications such as a bigger stabilizer bar as well as model-specific shocks and springs that were nearly twice as stiff as the ones found on a stock Corvette Stingray.  Upgrades to the braking system included cooling ducts, finned drums and a dual-circuit master cylinder with a vacuum booster.
The only engine offered on Z06-equipped cars was a 327-cubic-inch small block V8 engine called L84 internally.  Fed by a Rochester mechanical fuel injection system, the eight-cylinder sent 360 horsepower and 352 lb-ft. of torque to the rear wheels via a four-speed manual transmission and a Postiraction rear end, enabling the ‘Vette to reach 60 mph from a stop in a respectable 5.9 seconds.
Early Z06 cars were sometimes referred to as tankers because they were equipped with a large 36.5-gallon fuel tank that enabled them to go further between fill ups and consequently spend less time in the pits.  The big tank didn’t fit in the convertible Corvette so the Z06 package was initially only offered on the coupe.
In 1963, checking the Z06 box on the list of options cost buyers $1,818, pushing the car’s total price up to a lofty $6,732.  To put that figure into perspective, that same year a Jaguar E-Type coupe retailed for $5,895 and a humble Volkswagen Beetle started at $1,595.
The only way to know about the Z06 package was through word of mouth because it was not advertised in brochures and period reports indicate it was rarely brought up by salesmen.  Chevrolet never expected the Z06 to become a hot-selling option package but it nevertheless tried to boost its popularity by making the 36.5-gallon tank optional and the regular 20-gallon tank standard, a measure that slightly lowered its price.
Fitting Z06 cars with the 20-gallon tank also enabled Chevy to offer the package on convertible Corvettes, though factory records indicate only a single example was ever built.
The Z06 Goes Racing
In October of 1962, a group of Corvette Z06s trekked out from the St. Louis, Missouri, factory to the Riverside Raceway in California to participate in the Los Angeles Times Three-Hour Invitational Race.  The cars had just rolled off the assembly line and their engines were carefully broken in on the cross-country drive.

Chevrolet thought all eyes would be on the Z06 until Carroll Shelby unexpectedly announced he had chosen the event to kick off his Ford-powered Cobra’s racing career.  The Cobras packed a better power-to-weight ratio than the ‘Vettes, giving them the upper hand on the track, but they were taken out of the race one by one by miscellaneous mechanical issues.  Although problems also plagued the Corvettes, the number 119 car driven by Doug Hooper managed to secure first place after three intense hours of racing.

The Three-Hour Invitational Race marked the beginning of a bitter rivalry between the Chevrolet Corvette and the Shelby Cobra that would last for years to come.  Engineer Arkus-Duntov fired back by developing the potent Corvette Grand Sport but Chevrolet’s top brass pulled the plug on the project after five examples were built.
Only 199 cars had been ordered with the Z06 package by the time it disappeared from the list of options.  Other hot-rodded variants of the mighty Corvette came and went, but the Z06 name did not return to the Chevrolet lineup until 2001.
Tags:
American Manufacturers AssociationChevrolet Corvette Z06Corvettefactory-built racerGeneral Motorsthe 24 HoursZora Arkus-Duntov