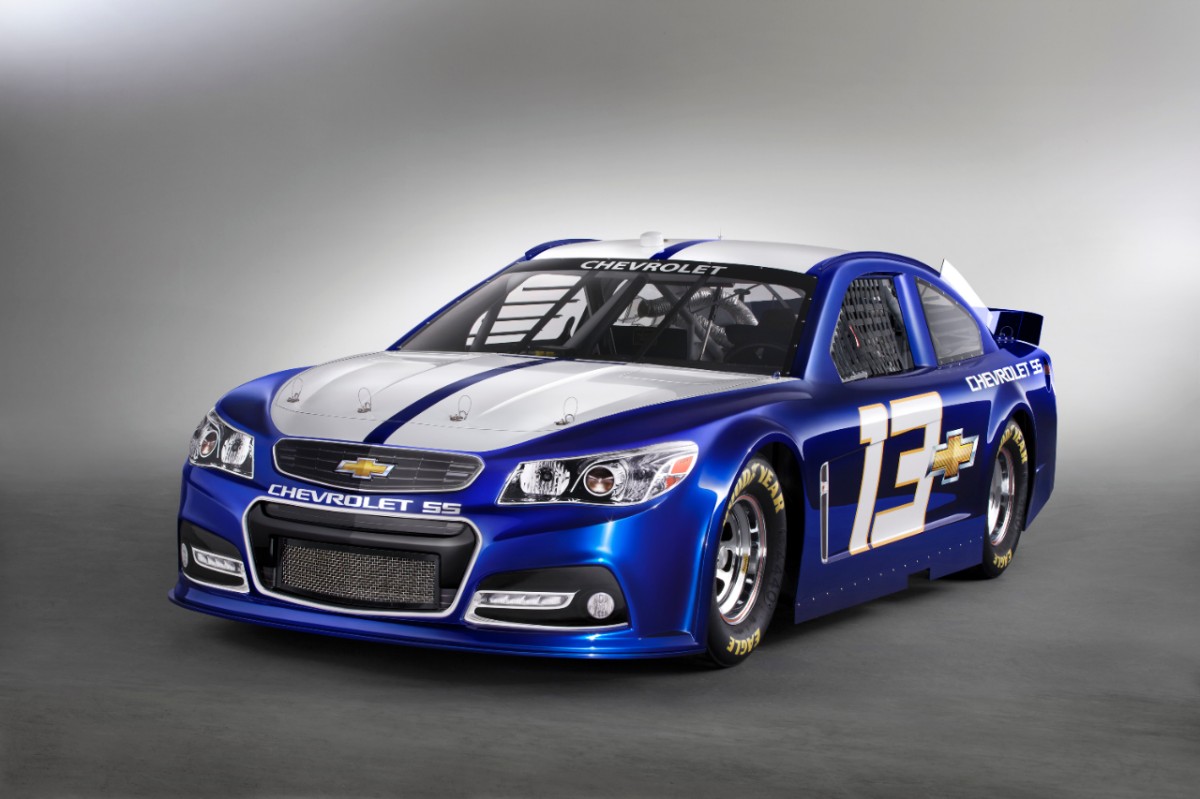 We’re inching closer to the official debut of the production Chevrolet SS. Until then, let’s enjoy the racing version, set to compete in the NASCAR Sprint Cup in 2013. It’ll make its racing debut at the 2013 Daytona Speedweeks, ahead of its production debut at either the Detroit or New York Auto Shows.
There’s not much else to tell. It’s a NASCAR. That means without the stickers, it’d look just like the competitors from Ford and Toyota. Still, it does show us a little about the styling of the production SS. The headlights and grille look similar to the current Caprice PPV police car. There’s also a set of what might be LEDs in the lower air intakes, while the taillights look similar to what’s currently offered on the Malibu. A pair of exhaust tips can be seen stickered to the backend, as well. There’s a sidegrille ahead of the front doors, which certainly looks like it could be Corvette inspired.
Of course, this is all conjecture on our parts. It’s entirely plausuable that the production SS will share only a passing similarity to this racer. Be sure to peruse the gallery and give us your take on the styling cues in the comments below.
Please scroll down for the official press release from Chevrolet.
2013 NASCAR Chevrolet SS Unveiled
Will Debut at the 2013 Daytona SpeedWeeks in February
LAS VEGAS – Chevrolet today opened a new chapter in its storied racing history, unveiling its eagerly anticipated 2013 NASCAR Chevrolet SS race car. Powered by the legendary small block V-8 engine, the rear-wheel drive performance sedan will be Chevrolet’s newest entry in the NASCAR Sprint Cup Series, beginning with the 2013 SpeedWeeks in Daytona, Fla.
The new NASCAR race car closely resembles the all-new rear wheel drive V-8 Chevrolet SS performance sedan that will debut early next year.
“As a passionate race fan, the debut of the SS NASCAR race car is a genuinely exciting moment for me,” said GM North America President Mark Reuss. “With the SS, Chevrolet is delivering a true rear-wheel-drive NASCAR race car that is very closely linked to the performance sedan that will be available for sale, ensuring that our most loyal enthusiasts will have the opportunity to experience the same thrill every day on the open road that our race car drivers enjoy on the track on race day.
“The Chevrolet SS also demonstrates how we are able to leverage our global product portfolio to deliver a unique performance experience,” Reuss said. “The specialized development and testing work done for the race car will certainly benefit the entire Chevrolet product lineup.”
The Chevrolet SS is the next in a long line of famed nameplates that Chevrolet has campaigned in NASCAR. It replaces Impala, which scored 151 wins from 1959-64 and 2007-12.
“We are looking forward to another exciting year of NASCAR competition and expect that the new SS race car, with some of the most skilled drivers on the circuit behind the wheel, will distinguish itself on the track,” said Jim Campbell, U.S. vice president of Performance Vehicles and Motorsports.
The Chevrolet SS will be a derivative of the award-winning global rear-wheel-drive architecture that spawns performance vehicles like Chevrolet Camaro and Holden’s upcoming VF Commodore. The limited production version of the Chevrolet SS will be a 2014 model and will arrive in dealer showrooms in late 2013. It is the first time in 17 years that Chevrolet will offer a rear-wheel-drive sedan for sale in the United States.
Chevrolet has long used the SS (Super Sport) designation on high-performance models of some of its most enduring nameplates. The SS designation first appeared in 1957 on a Corvette prototype race car built under the guidance of Zora Arkus-Duntov with the plan to enter it in the Le Mans 24-hour race.
The first production vehicle to be offered with an SS optional package was the 1961 Impala – 453 were built with the performance upgrades, which included a modified chassis and suspension, power brakes, a steering column mounted tachometer and unique wheels and tires.  The SS designation returned to the Chevrolet lineup in 2010 with the debut of the fifth-generation Camaro.
Chevrolet has 702 victories in the NASCAR Sprint Cup Series, more than any other manufacturer.  Fonty Flock earned the manufacturer’s first win on March 26, 1955, at Columbia, S.C. Five-time series champion Jimmie Johnson achieved Chevrolet’s 700th victory earlier this month at Texas Motor Speedway.
Chevrolet was America’s best-selling performance car brand in 2011 with Camaro and Corvette accounting for one out of every three sports cars sold in the United States.  The addition of the SS to the lineup is expected to further strengthen Chevrolet’s position as a leading performance brand.

Founded in 1911 in Detroit, Chevrolet is now one of the world’s largest car brands, doing business in more than 140 countries and selling more than 4 million cars and trucks a year. Chevrolet provides customers with fuel-efficient vehicles that feature spirited performance, expressive design and high quality. More information on Chevrolet models can be found at www.chevrolet.com.