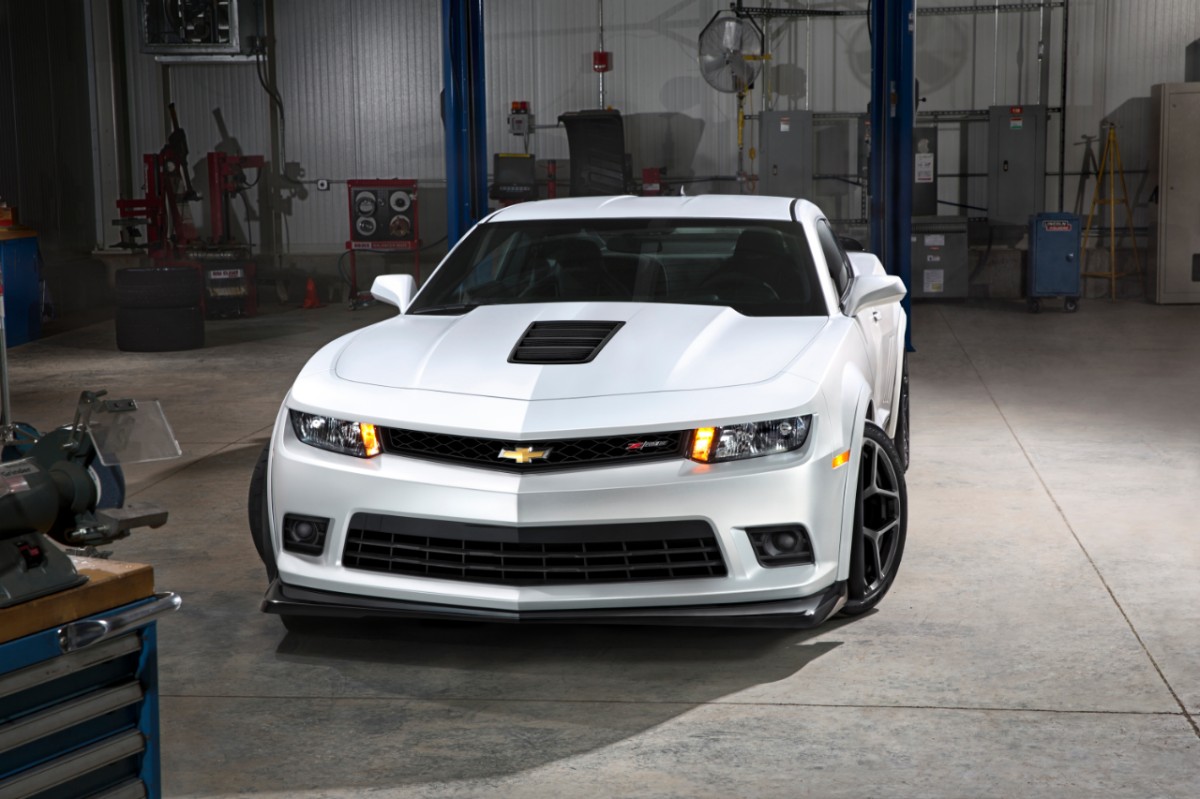 Ford discontinued the Mustang Boss 302 after two years on sale. This, the Ford people said, was all part of the plan. The Blue Oval only planned on offering the best Mustang in decades for a mere two years, rather than making it a staple of the lineup. This was a mistake, not just because the Boss 302 was awesome, but because arch-nemesis Chevrolet had a track-focused muscle car of its own on the way.
This is the Camaro Z/28, and much like the original 1967 model, it’s designed to excel on the road courses of North America. Rather than a 302-cubic-inch mill, like the original Z/28 and the Boss, this new Camaro sports a 427-cubic-inch monster. That’s 7.0 liters of engine displacement in today’s parlance. It’s not just any monster engine, though. No, the Z/28 borrows its powerplant from the excellent C6 Corvette Z06.
This heroic V-8 features an aluminum construction, and an old-school overhead valve layout. In the Z/28, it’s estimated to churn out 500 horsepower and 470 pound-feet of torque. What that relates to in performance numbers, we can only guess. Chevrolet claims the Z/28 is three seconds faster per lap than the ZL1. Unfortunately, we have absolutely no clue what track those three seconds are saved on.
The sole gearbox on the Z/28 is a Tremec TR6060 manual transmission. This is the same transmission that’s offered on the Camaro SS, but it features tweaked gear ratios, with a 3.91 rear-end in place of the 3.45 on the SS.
Part of the appeal of the Z/28 package is its 300-pound reduction in weight over the ZL1. This is thanks to a number of tweaks, ranging from a trunk that has had its carpet and sound deadening ripped out, to thinner glass on the rear window. HID headlamps and foglamps aren’t offered while a lighter battery is used to further trim weight. The truly dedicated can even snag a Z/28 without air conditioning.
This weight trimming is part of the reason the Z/28 can pull an epic 1.05g on the skidpad. And while we’re mightily impressed by that number, what’s more surprising is that it’s done without Chevrolet’s excellent magnetic ride control. Instead of MRC, the Z/28 utilizes big, sticky Pirelli PZero Trofeo R tires, mounted on 19-inch forged aluminum wheels. Of the 200 tweaks to the suspension, the biggest are a set of race-derived dampers. Called spool-valve dampers, adjustments can be made to account for high- and low-speed wheel motions on top of the standard bump and rebound tweaks. Chevy promises these dampers can use much stiffer rates without negatively affecting the ride quality.
Finally, Chevy has tacked on a set of Brembo carbon-ceramic brakes. We knew the day that CCBs would be available on muscle cars would be in the future, but we didn’t expect it to be quite so soon. The 15.5-inch front and 15.3-inch rear rotors are mounted between six- and four-piston calipers, respectively.
Sporty interior tweaks consist of a the ZL1’s flat-bottom steering wheel and a meaty set of Recaro sport seats
The Z/28 joins the rest of the Camaro range with new, more aggressive sheetmetal. The V-6 and SS models will go on sale later in 2013, with the Z/28 hitting dealers within the next year.
Tags:
camaro z/28chevrolet camaro z/28chevrolet camaro z/28 imageschevrolet camaro z/28 pricechevrolet camaro z/28 reviewchevrolet camaro z/28 specsFordNorth AmericaPirellitrack-focused muscle car