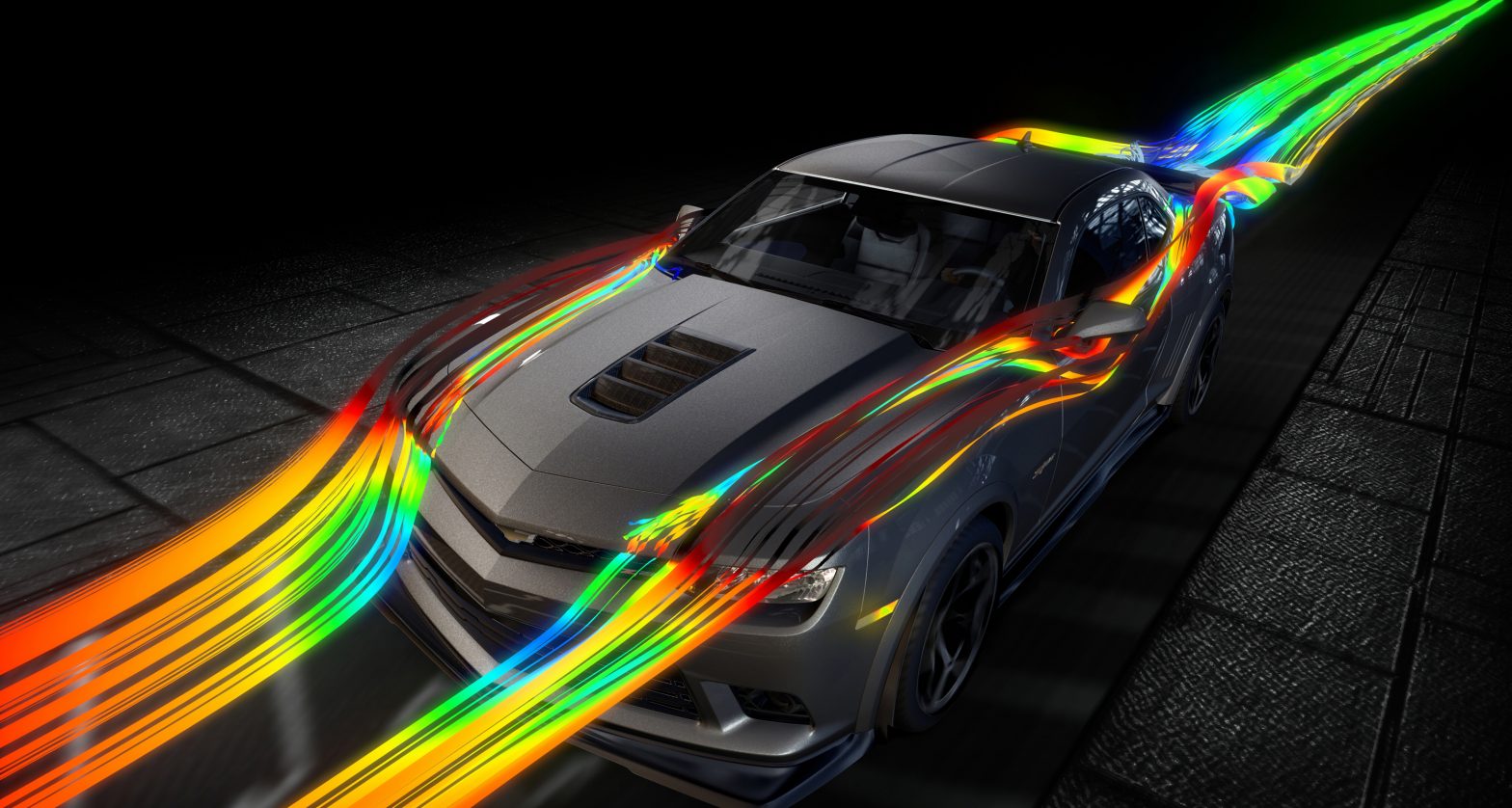 Chevrolet has detailed the aerodynamic program for the Camaro Z/28, along with some interesting photos showing the way the car plays with the air around it.
The Z/28 achieves 440 pounds more downforce than the Camaro SS at 150 miles per hour. Along with the car’s available 505 horsepower and 481 pound-feet of torque and track-tuned chassis, Chevrolet credits this downforce for the Z/28’s impressively fast lap on a rainy day at the Nürburgring.
In the front of the car, the splitter produces downforce, while the belly pan reduces lift. Air is directed through the grille and up through the hood extractor, cooling the engine compartment, and preventing that air from exiting out the bottom of the car and causing lift.

Rocker moldings and extended wheel house guide airflow along the side of the car, past the wheels. Small deflectors in front of the front wheel flares help to generate downforce.
In the rear, the spoiler has a small “wickerbill” tab along the edge, which improves aerodynamics in the rear, and helps with stability in the corners.
Click through the gallery for more information about what role the Camaro Z/28’s aerodynamic features play at different parts of the car. Scroll down for more details in the press release, below.

2014 Chevrolet Camaro Z/28 is Designed for Downforce
Racing-inspired design elements enhance high-speed stability for faster laps
DETROIT – When it comes to keeping its tail on the track, the 2014 Camaro Z/28 manages airflow like few other production vehicles, generating downforce like a race car to press the tires against the track for high-speed stability and greater cornering capability.
Numerous modifications were made to the exterior, compared to the Camaro SS, with new and revised content developed to improve aerodynamics, powertrain cooling and brake-system cooling. They help the Z/28 produce 440 pounds more downforce at 150 mph, relative to the SS, which generates slight lift at that speed.
In fact, the aerodynamically optimized design helped the Camaro Z/28 log a lap on Germany’s legendary Nürburgring road course that was four seconds faster than the Camaro ZL1’s, and beat published times for the Porsche 911 Carrera S and the Lamborghini Murcielago LP640.
“Most production cars are designed with some lift at speed in order to slip through the air for greater fuel economy, but the all-new Camaro Z/28’s track-oriented purpose dictated an entirely different take on airflow management,” said Tom Froling, lead development engineer – aerodynamics. “Its carefully tailored aerodynamics package generates downforce for greater handling stability at speed, and the grilles are optimized to meet stringent cooling flow and brake-cooling requirements.”
The new Camaro Z/28 is the fastest factory-produced Camaro ever on a track, with improved speed coming from three areas:
Power comes from the 7.0L LS7 engine, rated at an SAE-certified 505 horsepower (376 kW) and 481 lb-ft of torque (652 Nm). A close-ratio six-speed manual transmission is the only transmission offered and power is distributed to the rear wheels via a limited-slip differential featuring a helical gear set, rather than traditional clutch packs, for optimal traction.
“It’s a track-proven, uncompromising collection of hardware that generates the Z/28’s power and channels it to the ground, but it’s the way the Z/28 manages airflow that truly helps it stick to the track to make it fast and stable at speed,” said Froling. “None of the car’s unique exterior elements is without a performance-enhancing purpose. In fact, it shares several racing-inspired aero features from various Camaro and Corvette race cars.”
Computational fluid dynamics, reduced-scale rolling wind-tunnel testing, full-scale clay models and full-size prototypes were tested in several wind tunnels, including General Motors’ wind tunnel in Warren, Mich., resulting in five primary contributors to the Z/28’s aero supremacy:
1. Front splitter
The Z/28’s front splitter is a large aero panel that provides downforce at the front of the car, enhancing cornering capability and high-speed stability. It is designed to withstand 250 pounds of downforce at its tip and is matched with an aero closeout panel under the front of the engine compartment that also enhances aero characteristics – along with molded-in aero features forward of the front wheels.
2. Rear spoiler with ‘wickerbill’
At the outset of development, the aerodynamic coefficient of drag goal was achieved with original Camaro SS content and an accessory rear spoiler, but to meet the downforce requirements for Z/28, the rear spoiler was modified with a “wickerbill” – a small, vertical tab at the edge of the spoiler. Although an aesthetically minor change, it adds approximately 28 counts of drag, improving rear lift performance by 70 counts. That allows the Z/28 to handle turns at higher speeds and delivers greater overall high-speed stability.
3. Hood extractor vent
A functional carbon fiber hood extractor provides increased engine cooling by allowing hot air an exit route, but also plays an important in the car’s aero performance. It provides a path for air channeled through the grille to exit out the hood and over the car. Without the vent, the air would be pushed out the bottom of the engine compartment, which could generate lift. The design is similar to the extractor featured on the Camaro ZL1.
4. Rockers, wheel house extensions and front tire deflectors
Specific rocker moldings provide aggressive styling and improved aerodynamic performance, while unique wheel house extensions cover the Z/28’s wide tires to push air past the tires. Deflectors at the bottom-front corners of the front wheel flares also contribute to the car’s downforce-producing aerodynamics, taking the place of a conventional air dam.
5. Belly pan
The Z/28 underbody incorporates a belly pan that helps reduce front lift. It was developed using computational fluid dynamics and wind-tunnel testing. Along with the aero benefit, it also contributes to drivetrain cooling, with modified NACA duct profiles designed to draw air into the underbody tunnel area, where the highly energized air provides extra cooling for underbody components affected by the exhaust thermal energy of the LS7 engine. Unique wheelhouse liners with closeouts work with the vehicle underbody for optimal airflow, too.
Additionally, the Z/28’s unique front fascia plays an important role in airflow management. It is based on the Camaro SS, but the fog lamps, air dam and the upper-base grille are replaced with covers for deleted fog lamps (to reduce weight), an air duct support bracket, an airflow-optimized upper grille for enhanced cooling and a modified fascia lower inlet that incorporates provisions for the brake cooling ducts. They funnel air from the splitter/lower grille through the ducts to the brake rotors and calipers.
The 2014 Camaro Z/28 arrives in dealerships next spring, ready for the 2014 racing season.
Tags:
AeroCamaro