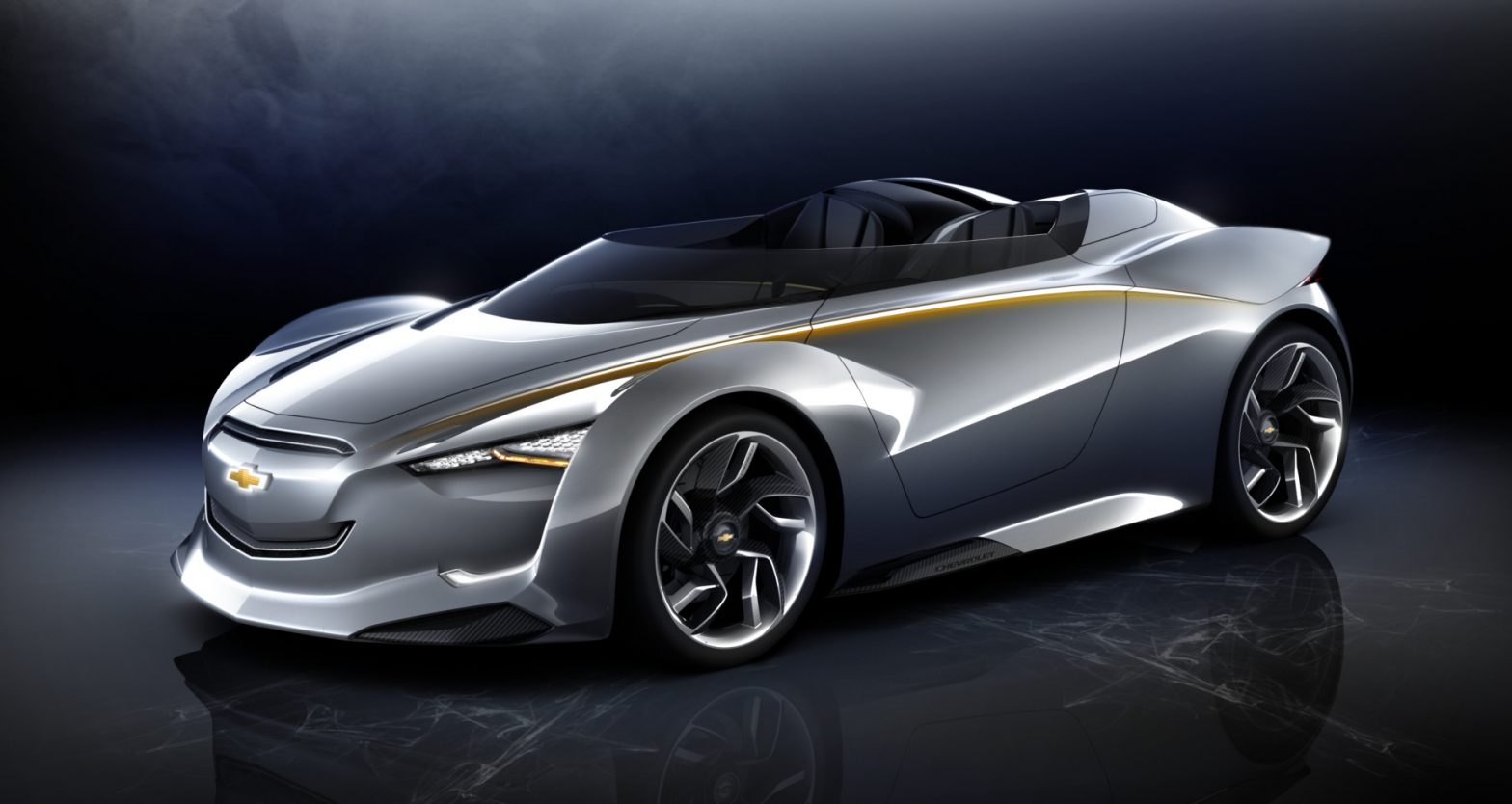 Today, Chevrolet pulled the wraps off its new hybrid concept car, the Mi-ray roadster, at the 2011 Seoul Motor Show.

Its open-top body is made of carbon-fiber-reinforced plastic, and features scissor doors, ambient lighting on the character line, LED headlights, and Corvette-inspired spoilers front and rear. It features aluminum-carbon fiber composite twenty-inch wheels up front and twenty-one-inch wheels in the rear.

The interior of the car in inspired by fighter jets, and features brushed aluminum and leather.  The gauge cluster deploys from the steering column with the touch of a button. The car’s forward-facing camera integrates with the GPS to overlay the images on the navigation display.

For urban driving scenarios, the Mi-Ray is powered by two 15-kilowatt (20-horsepower) electric motors in front, with a lithium-ion battery supplying the charge. Regenerative braking helps recharge the battery. Interestingly, the Mi-ray can switch between front- and rear-wheel drive.

When the driver needs a bit more performance from the car, a turbocharged 1.5-liter engine is on hand drives the rear wheels in combination with the two electric motors. The Mi-ray’s compact dual-clutch transmission is tuned for an improved top speed.

Scroll down for more details and specifications in the press release.

According to GM Korea President and CEO Mike Arcamone, “‘Mi-ray’ is Korean for ‘future.’ As GM rolls out Chevrolet across Korea, the Mi-ray concept offers an exploration of future possibilities for the brand. It strengthens the bond between car and driver, creating a fresh look at what sports cars of the future might be.”

The Mi-ray was developed at the GM Advanced Design Studio in Seoul. Combining cutting-edge hybrid propulsion technology and advanced styling, it balances iconic Chevrolet design cues with a future design vision as Chevrolet celebrates its centennial in 2011.

The Mi-ray pays tribute to Chevrolet’s sports car heritage. It is small and open like the 1963 Monza SS, and light and purposeful like the 1962 Corvair Super Spyder. Its aerodynamic fuselage is reminiscent of modern jet fighters.

Made of carbon fiber and CFRP (carbon fiber-reinforced plastic), the wedged body side is divided by an angled character line, with ambient lighting underneath. This accent creates a sweeping line of light when the car is in motion, bringing a warm glow to the sculptured body. Le Mans racer-style scissor doors open up and out of the way for dramatic access to the interior.

The powerful front end offers a reinterpretation of the Chevrolet face. The Mi-ray’s dual port grille is flanked by LED headlamps with new signature daytime running lamps. The front and rear fenders evoke Chevrolet Corvettes of the past and express the concept’s sports car spirit. At the corners, carbon-fiber spoilers help control down force and airflow.

Distinctive retractable flaps provide additional airflow control while providing access to the charge port on one side and the fuel filler on the other. The charge port also features an external battery charge indicator. Each rear fender contains individual cargo space for the storage of small items. Under the ducktail surface, the taillamps provide a new interpretation of Chevrolet’s twin element identity.

The Mi-ray features aluminum-carbon fiber composite 20-inch wheels in front and 21-inch wheels in the rear. The strong turbine theme evokes movement, even when the Mi-ray is stationary.

The heavily tapered top view enhances the Mi-ray’s purposeful image. From above, the cabin has a unique diamond shape.

The interior of the Mi-ray echoes Chevrolet’s racing heritage. As with the exterior, it takes inspiration from jet fighters. The Mi-ray contains a melange of brushed aluminum, natural leather, white fabric and liquid metal surfaces, for an overall effect of sculptural velocity.

The interior compartment is surrounded by a carbon fiber shell, which gives it a lightweight yet rigid structure. Its flowing, yet slightly tensioned, twin cockpit tightly wraps around the driver and passenger. The cockpit is driver focused, drawing inspiration from the iconic Chevrolet sports car. However, the passenger is also fully engaged in the driving experience.

Asymmetric seats flow from the door, forming a symmetric interior that gives the driver a feeling of being fully connected with the car. Ambient lighting, which starts from the upper instrument panel and flows into the seat back area, adds a sense of luxury. Seat cushions and headrests are connected by the lightweight carbon fiber shell and mounted on a single aluminum rail. The headrest area follows the exterior form, integrating with an air scarf for open-air driving.

Designers took a unique approach to displaying information, using back projection on the instrument panel. Information in front of the driver has been prioritized into three zones. Immediately in front is vehicle performance. It is flanked on the left by range and on the right by navigation and mileage figures. This eliminates unnecessary visual clutter, allowing the driver to focus on the thrill of driving.

The center touch screen flows down to an aluminum support, which evokes a fighter jet’s nose with the landing gear down. The exterior surface waterfalls down into the interior to meet the reinforced console, connecting the front and rear of the car.

The centrally located start button is also inspired by a jet aircraft. When the button is pressed, the column-mounted retractable meter cluster rises like a jet fighter canopy and “Interactive Projection” appears on the white surface.

Retractable rearview cameras, which replace traditional rearview mirrors, extend from the side glass electrically. In city driving, the forward-facing camera operates in conjunction with GPS to overlay navigation information with real-time video.

The Mi-ray features a concept “mid-electric” propulsion system, located primarily behind and beneath the driver, that maximizes performance and fuel efficiency.

“Many of the components in the Mi-ray’s propulsion system are a logical extension of GM’s current technology portfolio,” said Uwe Grebe, executive director for GM Powertrain Advanced Engineering. “The concept shows the potential for reconfiguring, rescaling and extending today’s propulsion technologies.”

The Mi-ray is propelled by two front-mounted 15-kW electric motors for quick acceleration and zero emissions in urban driving. The motors are powered by a 1.6-kWh lithium-ion battery that is charged through regenerative braking energy. The Mi-ray has the capability of being switched from front-wheel drive to rear-wheel drive.

For performance driving, the Mi-ray’s 1.5-liter four-cylinder turbocharged engine combines with the electric motors, providing spirited torque control to both the left and right wheels as needed. The high-tech engine, mounted behind the cockpit, drives the rear wheels while seamlessly integrating electrification technology that defines a new standard in the compact roadster segment.

A dual-clutch transmission (DCT) enables a reduction in the powertrain’s size by eliminating the torque converter. Shifts are quick and firm. The shift pattern has been tuned for improved top speed in performance mode. A start-stop system works in conjunction with the DCT.

“The propulsion concept fits perfectly with the rest of the vehicle, delivering big performance in a small footprint, on the road and in the environment,” said Arcamone.  “By combining GM propulsion technology and visionary design, the Mi-ray points to the future of Chevrolets around the globe – expressive, youthful and entertaining.”

Founded in Detroit in 1911, Chevrolet celebrates its centennial as a global automotive brand with annual sales of about 4.25 million vehicles in more than 130 countries. Chevrolet provides consumers with fuel-efficient, safe and reliable vehicles that deliver high quality, expressive design, spirited performance and value. The Chevrolet portfolio includes iconic performance cars such as Corvette and Camaro; dependable, long-lasting pickups and SUVs such as Silverado and Suburban; and award-winning passenger cars and crossovers such as Spark, Cruze, Malibu, Equinox and Traverse. Chevrolet also offers “gas-friendly to gas-free" solutions including Cruze Eco and Volt. Cruze Eco offers 42 mpg highway while Volt offers 35 miles of electric, gasoline-free driving and an additional 344 miles of extended range. Most new Chevrolet models offer OnStar safety, security and convenience technologies including OnStar Hands-Free Calling, Automatic Crash Response and Stolen Vehicle Slowdown. More information regarding Chevrolet models can be found at www.chevrolet.com.

Audi Celebrates Assembly Of Its Five-Millionth A4