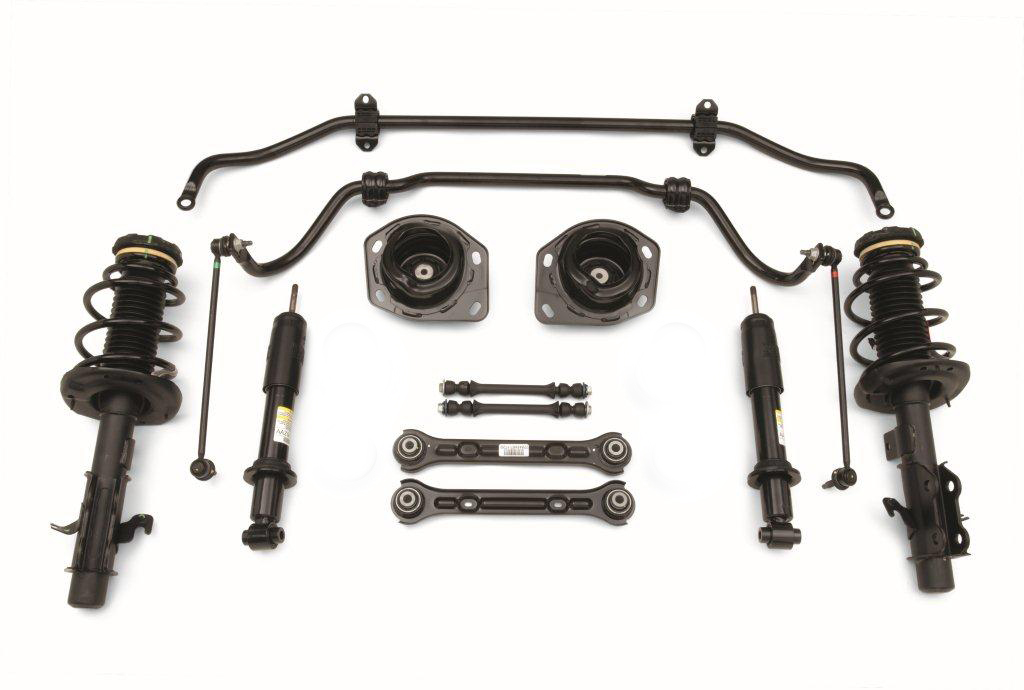 Chevrolet Performance has announced its collection of performance parts for the fifth-generation (2010 model year and newer) Camaro. The factory-engineered parts for the Camaro V-6 and SS are borrowed from the ZL1 and SS 1LE. When installed by the dealer, many of the parts do not affect the car’s current warranty.
A camshaft and cylinder heads kit adds 40 horsepower to the LS3 engine in the Camaro SS, and can also be equipped to other LS engines in other vehicles.

Parts from the ZL1 that can be equipped to the V-6 and SS Camaros include Brembo brake kits, rear driveline kits, twin-pump fuel pump, short-throw shifter (5.1 ratio) for the SS, and low-restriction air filter element for the SS.
Performance bits from the 1LE include a strut tower brace and PCV valve. A 1LE Track Pack suspension kit for the Camaro SS includes a 27-millimeter front and 28-millimeter rear solid stabilizer bar, retuned front struts, monotube rear shocks, and stiffer toe links and rear shock mounts. This kit improves body roll and stability, and provides handling advantages on the road course.
Drag racers can also source parts from the hardcore COPO Camaro, including the COPO hood and gauges, with more items on the way.
Scroll down for more detail in the press release, below.

Gen 5 Camaro Performance Parts Released
Factory engineered Chevrolet accessories can preserve vehicle warranty
DETROIT – Chevrolet Performance has released a comprehensive collection of factory-engineered performance parts and accessories for fifth-generation Camaros, 2010 model year and newer. Many of the parts preserve the vehicle warranty when installed by a Chevrolet dealer – an advantage aftermarket installers cannot provide.
The portfolio of parts is designed to make "Gen 5" Camaro V-6 and SS models more capable on the street and track and includes components from the high-performance Camaro ZL1 and the road racing-oriented Camaro SS 1LE package.
For customers interested in drag racing or high-horsepower projects, Chevrolet Performance offers the new ZL1 rear driveline system. It is the strongest independent rear axle option available for the Camaro, featuring a 9.9-inch rear differential mounted in a robust cast iron center section (vs. the aluminum center section in SS and V-6 models) and additional high-strength components.
For customers interested in road-racing or improved handling, Chevrolet Performance offers suspension components from the Camaro 1LE, which is homologated for competition in SCCA’s T2 class. The same components in the Chevrolet Performance 1LE Track Pack enabled a production Camaro SS 1LE to circle Virginia International Raceway in less than three minutes.
“Chevrolet Performance is the first stop for owners building a competitive, durable Camaro for the track,” said Jim Campbell, GM U.S. vice president of performance vehicles and motorsports. “These Chevrolet Performance parts are based on Chevrolet factory-validated production components that were tested on racetracks and validated to standards unmatched in the aftermarket industry. Quite simply, they’re tailored for improved performance and built to the highest standards.”
The parts are available directly from Chevrolet dealers, which can be found on the dealer locator at chevroletperformance.com or chevrolet.com.
Camaro ZL1 components:
Camaro 1LE components:
Camaro SS components:
LS3 heads / LS7 camshaft package (part number 19300535)
Developed by the same powertrain engineers who work on Chevrolet’s motorsports programs, this power-building kit was developed as a direct replacement for the factory-installed heads and camshaft on 2010-and-later Camaro SS models, adding up to 40 horsepower. The kit includes CNC-ported LS3 cylinder heads, which flow more than 350 cfm (intake side) with 276cc intake runners and 2.165/1.590-inch valves. The high-lift LS7 camshaft makes the most of the heads’ airflow capabilities, with 0.558/0.558-inch lift and 211 degrees/230 degrees duration at 0.050-inch and a 121-degree lobe separation angle. Contents include the camshaft and fully assembled cylinder heads. Head gaskets and cylinder head bolts must be purchased separately. Tuning is required. This kit fits other LS-family engines with at least 4.000-inch bores.
COPO components for the drag strip
Chevrolet Performance also offers many of the specialty and high-performance components used in the COPO Camaro, allowing racers to build their own Camaro race car. They include components such as the unique COPO Camaro hood (part number 22950678) and COPO-logo gauges.
For the latest news on the COPO Program and new parts, sign up for the COPO Camaro mailing list at chevroletperformance.com.
# # #
About Chevrolet Performance
Driven by more than 100 years of motorsports heritage, Chevrolet Performance fuels the passions of automotive enthusiasts through high-performance vehicles, parts and racing. Championship motorsports technology is at the core of Chevrolet’s performance cars, including Corvette Stingray, Camaro ZL1, Camaro SS 1LE, COPO Camaro and the all-new Camaro Z/28. This technology also drives production-based performance and specialty racing parts, as well as licensed accessories, which are available through Chevrolet dealers and online at chevroletperformance.com. Chevrolet Performance is a leader in crate engines and parts for classics, with the industry’s only brand-new Gen I/II small-block and big-block crate engines, and an unmatched range of “LS” engines and parts for the street and track.
About Chevrolet
Founded in 1911 in Detroit, Chevrolet is now one of the world’s largest car brands, doing business in more than 140 countries and selling more than 4.5 million cars and trucks a year. Chevrolet provides customers with fuel-efficient vehicles that feature spirited performance, expressive design, and high quality. More information on Chevrolet models can be found at www.chevrolet.com.
Tags:
CamaroChevroletdealersuspensionszl1