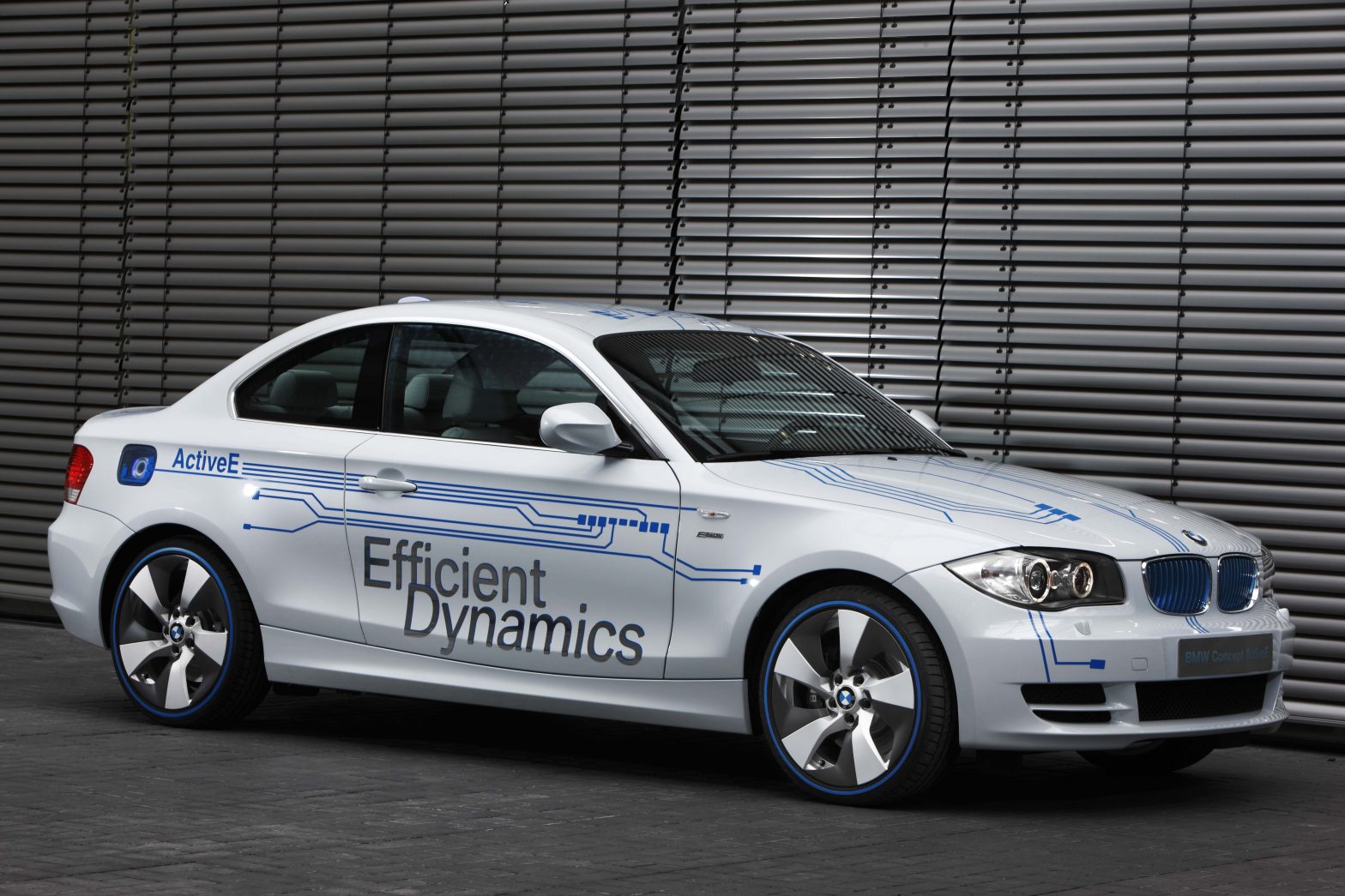 Today, BMW offers images and information about its ActiveE concept, an all-electric version of the 1-Series coupe.

Its electric motor produces 170 horsepower and 184 pound-feet of torque, significantly less than the 230 horses of the 128i. BMW predicts acceleration from 0-62 miles per hour in less than nine seconds. The range for the battery is an expected 100 miles.

While our interest is piqued by BMW’s use of an electric drive system in what is an already excellent drivers’ car, we wouldn’t be trading in the keys to a scrumptious 135i for the ActiveE, at least not on a permanent basis. When we think of electric drive, we immediately think “torque.” Perhaps future iterations will be able to match, or even surpass the pace of the current 1-Series.

See the BMW ActiveE concept in the gallery, or scroll down for more detailed information in the press release, below.

•   Concept study of a purely electrically powered model based on the BMW 1 Series Coupé.  The BMW Concept ActiveE represents a consistent continuation of the research and development activities of the BMW Group relating to electromobility as part of project i. A concept which realizes CO2-free mobility in BMW style is presented.

•   The BMW Concept ActiveE is the BMW Group’s second vehicle after the MINI E to be developed as part of project i. After the successful launch of the pilot project MINI E, the BMW Group announces the development of another field test of electric vehicles for private and selected fleet users. The aim is to test the use of electric drive for everyday purposes in a vehicle which offers the driving pleasure which is characteristic of BMW automobiles.

•   The specific features of the BMW Concept ActiveE include rear-wheel drive as is characteristic of BMW, a powerful drive system for dynamic acceleration maneuvers and a high level of efficiency to enable the vehicle to be used for purposes which go beyond urban mobility.

•   The vehicle concept also comprises an extended range of functions with a high level of practical relevance. The intelligent arrangement of the drive components makes it possible to provide four full-size seats and a luggage compartment volume of some 200 liters (7 cubic feet).

•   On the way to achieving CO2-free mobility, the BMW Group continues to develop electric drive as an additional mainstay of BMW EfficientDynamics. Electric drive provides an additional option for a lasting form of individual mobility alongside the ongoing optimization of all models with a pure combustion engine, the market launch of BMW ActiveHybrid technology in serial production vehicles and the BMW Hydrogen 7 as evidence of the suitability of hydrogen drive for everyday use.

•   The BMW Concept ActiveE is powered by a new synchronous electric motor specially developed for this vehicle. Its maximum output is 125 kW/170 bhp, the maximum torque of 250 Nm / 184 lb-ft is available from standing as is typical for electric motors and remains available over an unusually broad load range.

•   For the first time, electrical energy is stored in a lithium-ion battery pack developed jointly by BMW and the co-operation partner SB LiMotive especially for the BMW Concept ActiveE. A new stable temperature regulation function optimizes the battery pack’s performance.

•   Other characteristics of the drive technology used in the BMW Concept ActiveE are the weight-reduced construction and the package-optimized arrangement of all components. The electric motor is completely integrated in the rear axle, the power electronics is positioned above the motor. Space is used for energy storage which in vehicles powered by a combustion engine would be taken up by the conventional drivetrain and fuel tank. With a weight of some 1,800 kilograms / 3900 lbs (unladen weight according to DIN), a low center of gravity and an axle load distribution which is typical of a BMW, the vehicle has everything it requires to provide the dynamic driving properties and agile handling in the style of the BMW 1 Series.

•   Flexible charging technology enables the lithium-ion battery pack to be recharged by a conventional power outlet at public charging stations or at a special wall box. On the European grid, the battery pack can be fully charged at a high-current power outlet (50 ampere) in as little as 3 hours. In North America, using a high-current (32 ampere continuous) residential wall box, the charge time is about 4.5 hours.

•   The drive components used in the BMW Concept ActiveE have been developed as part of project i. The objectives on which this is based are derived from the requirements for the serial production development of a Megacity Vehicle.

•   In the BMW Concept ActiveE, new BMW ConnectedDrive services are presented which have been designed exclusively for use in an electric vehicle. This includes specific remote functions which enable the use of a mobile phone to check the charge status of the battery, search for public charging stations and activate the vehicle’s auxiliary heating and air conditioning functions.

•   The BMW Concept ActiveE is based on the BMW 1 Series Coupe. It embodies a new interpretation of the agility which is characteristic of the 1 Series. For the first time, CO2-free mobility and the driving pleasure characteristic of BMW are combined for up to four vehicle occupants in an electric vehicle concept.

•   There is a clearly recognizable differentiation from the serial production model of the BMW 1 Series Coupe with the body finish in Liquid White metallic, as well as graphic elements derived from printed circuits in Electric Blue on the hood, doors, roof and trunk lid, as well as the lettering “ActiveE”, “eDrive” and “EfficientDynamics” on the doors and side panels.  Specific light-alloy wheel wheels, the lack of an exhaust system and blue illuminated elements such as the roof fin and charging connection highlight the special character of this electrically powered concept vehicle.

•   The interior of the BMW Concept ActiveE includes specific leather seats with embossed graphic elements and blue accentuated seams as well as interior strips in Liquid White with rear-lit three-dimensional graphics. The instrument panel and the central display have been enhanced to include display items specific to electric drive. The use of innovative remote functions as part of BMW ConnectedDrive is shown with the example of a smartphone connection which is fully linked into the vehicle infotainment system.

GMC Acadia Gets The Denali Treatment For 2011