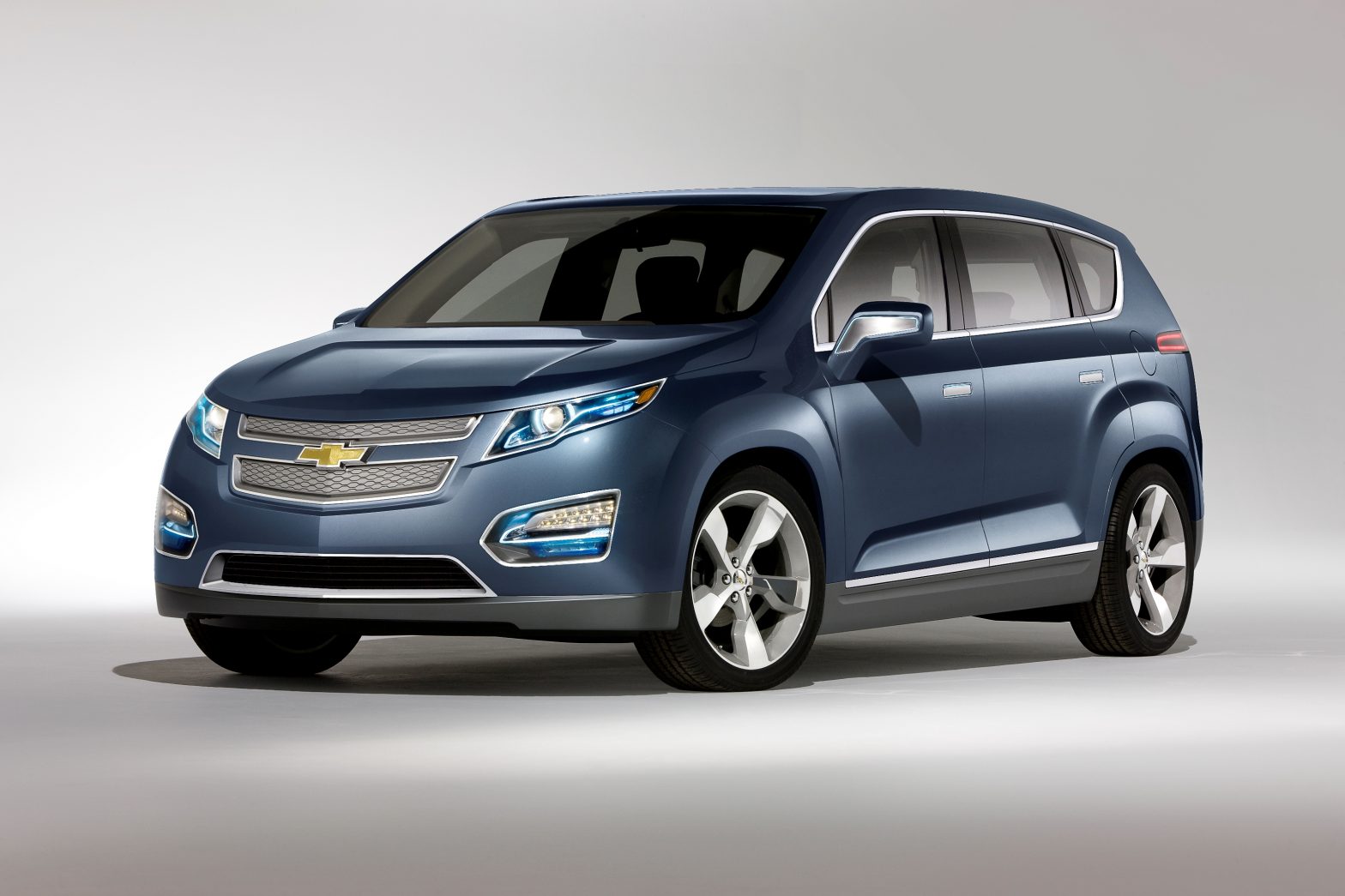 Using the 2011 Chevrolet Volt underpinnings, the MPV5 is a range extended electric multi-purpose crossover with seating for five. Like the Volt, the Volt MPV5 can run on electricity alone, then uses a gasoline generator to provide electricity and prevent battery depletion. It has an all-electric range of 32 miles, with an extended range of 300 miles.

The electric drive unit that propels the Volt MPV5 produces 150 horsepower and 273 pound-feet of torque.

Scroll down for more information and detailed specifications in the press release below.

Beijing – Chevrolet has made a major commitment to providing world-class, fuel-efficient vehicles to its customers around the world. In recent months, through GM’s Shanghai GM joint venture, Chevrolet has introduced the fuel-efficient Cruze and New Sail in China. It will introduce the Volt electric vehicle with extended range capability in 2011.

In preparation for the Volt’s arrival, Chevrolet is leveraging Auto China 2010, which starts today in Beijing, to introduce the Volt MPV5 electric concept. The five-passenger multi-purpose crossover concept demonstrates the potential of the Voltec propulsion system by utilizing the same foundation as the Volt, for gas- and tailpipe emissions-free electric driving.

The styling of the Volt MPV5 concept borrows design and aerodynamic cues from the Chevrolet Volt. The front fascia is among the most aerodynamic of any crossover thanks to its closed grille and aero-optimized lower air dam, both of which help improve fuel efficiency. A full-underbody belly pan, along with rocker claddings, creased tail lamps and specially designed blades on the rear quarter, also help the Volt MPV5 concept cut through the wind with ease. The intense focus on improved aerodynamics enables greater all-electric range.

“The Volt MPV5 concept takes the efficient design of the Chevrolet Volt and adapts it to the family vehicle crossover segment. It’s immediately recognizable as a true member of the Chevrolet family,” said Bob Boniface, Director of GM North America Crossover Exterior Design, whose team worked in conjunction with members of GM’s design studio in Australia on the Volt MPV5 concept.

When it comes to cargo, the Volt MPV5 concept carries on the crossover tradition thanks to its flip-and-fold second row seating, which provides up to 1,764.1 liters of cargo space with the seats folded and 863.7 liters of space behind the second row.

The Volt MPV5 concept utilizes the same Voltec propulsion system found in the Chevrolet Volt, including the added capability of an engine generator to extend the driving range and eliminate “range anxiety.” A 16-kWh T-shaped lithium-ion battery pack powers the electric drive unit.

The flexibility of the Voltec system enables the Volt MPV5 concept to meet full vehicle speed and acceleration requirements while driving the vehicle and its five occupants up to 51.5 km on pure electric propulsion. This is double what the average urban commuter in China travels each day. When the battery is depleted, a 1.4-liter engine generator sustains the battery charge and provides up to 482 km of electric propulsion.

“Rapidly growing demand for personal transportation across China is creating new environmental and energy security challenges,” said Kevin Wale, President and Managing Director of the GM China Group. “GM is committed to finding and adopting solutions, which include the electrification of the automobile. The world premiere of the Volt MPV5 concept in Beijing demonstrates GM’s desire to make China a global focus of its advanced technology strategy.”

GM continues to advance electrification in China through research and development. It has launched the China Automotive Energy Research Center (CAERC) in Beijing. The venture with SAIC and Tsinghua University is developing a comprehensive automotive energy strategy for China. The GM China Science Lab, which opened last November, is carrying out advanced automotive-related research, including battery development. In March, GM introduced the EN-V (Electric Networked-Vehicle) concepts in Shanghai. A centerpiece of the SAIC-GM Pavilion at World Expo 2010 Shanghai, EN-V embodies GM’s vision for personal urban mobility in 2030. In addition, GM is supporting its Shanghai GM joint venture’s “Drive to Green” strategy, which is focused on developing green products, supporting green manufacturing and undertaking a green responsibility.

General Motors, one of the world’s largest automakers, traces its roots back to 1908. With its global headquarters in Detroit, GM employs 204,000 people in every major region of the world and does business in some 140 countries. GM and its strategic partners produce cars and trucks in 34 countries, and sell and service these vehicles through the following brands: Buick, Cadillac, Chevrolet, GMC, GM Daewoo, Holden, Jiefang, Opel, Vauxhall and Wuling. GM is the joint global automobile partner of World Expo 2010 Shanghai along with Shanghai Automotive Industry Corporation Group (SAIC). More information on the new General Motors can be found at www.gm.com.

EV range (city in km):
up to 51.5 (32 mi) based on EPA city cycle
actual mileage may vary depending on driving habits/conditions, weather and battery age