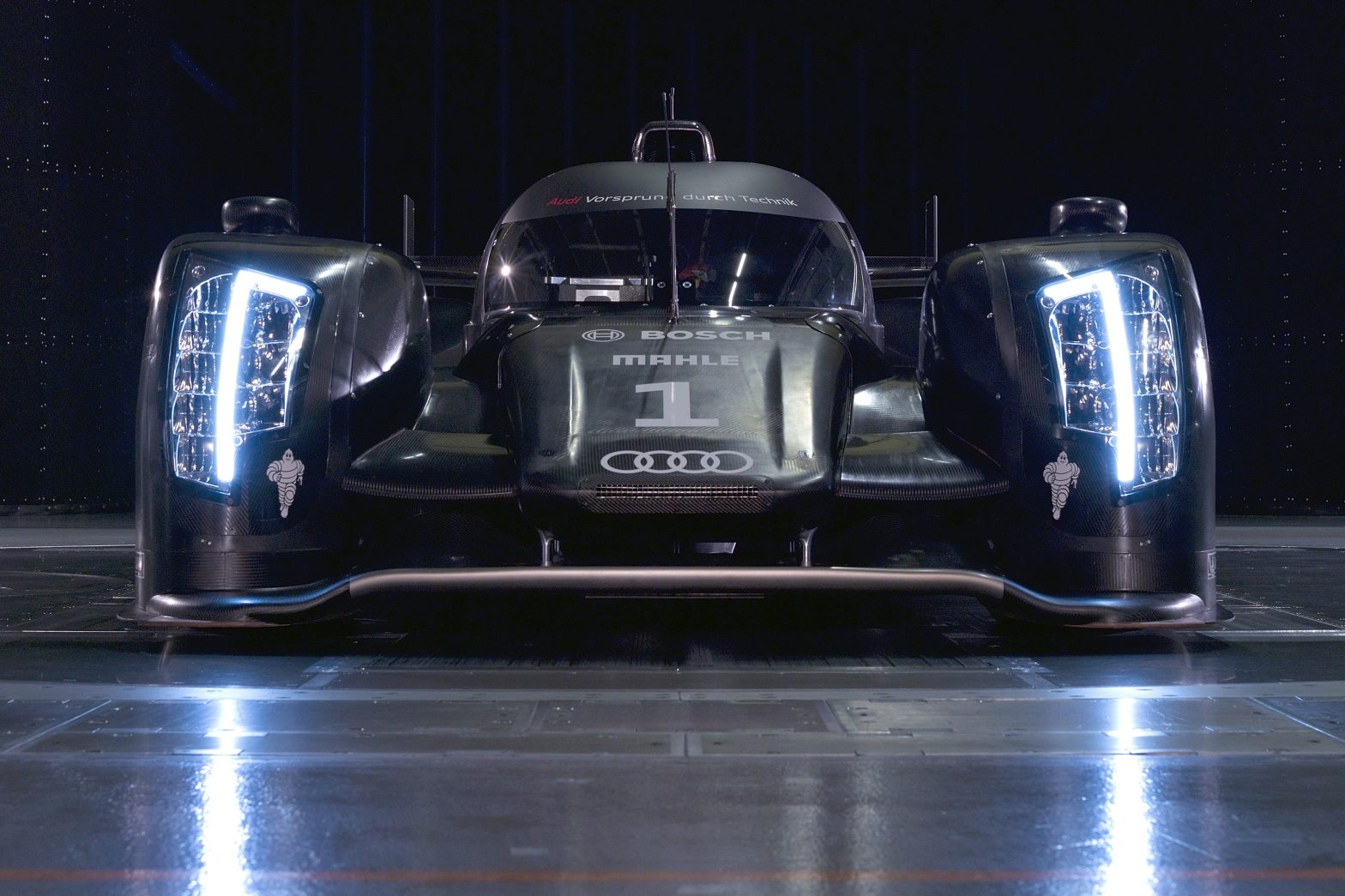 Audi has revealed its new closed-roof machine for the 2011 Le Mans 24 Hours race, the R18. The company has also laid out its motorsport schedule for 2011.

A 3.7-liter V-6 TDI engine powers the R18, and gears are changed with a custom six-speed transmission. It features a carbon fiber monocoque for light weight, and a closed roof for better aerodynamic performance. Wheels are equal sizes in front and rear for balance, and the LED running lights are meant to reflect Audi’s vintage logo.

The R18 will compete in the sports prototype class with the exception of Sebring, at which Audi will run a version of its R15 TDI in the 12-hour race. Its racing debut will take place at Spa-Francorchamps on May 8.

Audi will also be fielding the R8 LMS at the 24 Hour races at the Nürburgring and Spa in June and July. Audi will race nine A4 DTM cars, but has plans to develop a new DTM car, the R17, for 2012.

Read on below for more details about Audi motorsports projects in the press release.

INGOLSTADT, Germany, Dec 10, 2010  –  Audi aims to continue its string of victories at the Le Mans 24 Hours with a completely new LMP1 sports car development. Since its debut in 1999, the brand with the Four Rings has won the world’s most important endurance race as many as nine times with the R8, R10 TDI and R15 TDI models. In doing so, Audi has equaled this feat in the race’s roll of honor with Ferrari. With the new R18, which was presented at the Audi Sportpark in Ingolstadt on the evening of Friday, December 10, 2010, Audi is aiming for its tenth Le Mans success in 2011.

For the first time since 1999, Audi will contest Le Mans with a closed coupe again. "In the future, aerodynamic efficiency will be even more important at Le Mans than it was in the past,” says Head of Audi Motorsport Dr. Wolfgang Ullrich. "A closed car has clear advantages in this respect. Our computer simulations have been confirmed in the wind tunnel and during initial track tests.”

Significantly smaller engines than those used before will be prescribed at Le Mans in 2011 as the rule makers aim to achieve a substantial reduction of engine power. By opting for a 3.7-liter V6 TDI unit, Audi retains the diesel concept that saw its first victorious fielding in 2006. "From our point of view, the TDI continues to be the most efficient technology,” says Ulrich Baretzky, Head of Engine Development at Audi Sport. "There are good reasons why the share of TDI units among Audi’s production models is as high as it is.”
Through the innovative V6 TDI engine for the Le Mans 24 Hours, motorsport is yet again performing pioneering work for the production arm at Audi where there is a growing trend towards smaller, more economical but yet powerful engines.

Another new development is the six-speed transmission in the R18 which has been specifically modified for use with the smaller engine.

With regard to the chassis Audi Sport wants to live up to its promise, expressed in the brand’s "Vorsprung durch Technik” tagline. Unlike those of the closed Le Mans prototypes, the carbon fiber monocoque of the R18 does not consist of two halves but features a single-component design. This saves weight and increases stiffness.

For the development of the closed R18, engineers at Audi Sport were able to draw on the experiences gained in 1999 with the R8C and in 2003 with the LMP1 of the corporate "sister brand” Bentley that was victorious at Le Mans. "Also the Audi A4 DTM, which for example, features a heated windshield, allowed us to shorten the development cycle with respect to the ventilation of the cockpit, the doors and the heating of the windshield,” explains Dr. Martin Mühlmeier, Head of Engineering at Audi Sport.

The chassis and aerodynamics package contains a lot of know-how from the R8, the R10 TDI and the R15 TDI whereas the fitting of identically sized front and rear wheels is new to an Audi Le Mans sports car. This configuration allows a more balanced weight distribution.

The R18’s headlights, which are the first to completely consist of LEDs with optimized amount of light, are a technical highlight. The new generation of headlights was developed in close cooperation between Audi Sport and the Technical Development (TE) division of AUDI AG and by using at Le Mans, will be prepared for future use in production vehicles. Audi’s light designers had the chance to make their mark on the development as well: The LEDs of the daytime light form the shape of a "1” which is intended to inspire associations with Audi’s historic brand logo.

The Audi R18 has been designed for progressive electrification, which Audi Sport is planning to drive forward step by step. "But efficiency is always the crucial factor for us,” says Dr. Wolfgang Ullrich. "No matter which form of energy recovery we may choose the key aspect for Audi – in motorsport as well as on the production side of the house – is that it provides a true advantage.”

The development of the new Audi R18 started in mid 2009. The V6 TDI engine has been running on the dynamometers since the summer of 2010. The R18, with Allan McNish at the wheel, completed its first test on a racetrack at the end of November.

The racing debut of the Audi R18 is planned for the Spa-Francorchamps (Belgium) 6 Hours on May 8. Prior to the event, the new prototype will be able to do its first laps on the race track at Le Mans during the official test day on April 24 and gather important data for the race on June 11 and 12.

Audi is planning to field three Audi R18 cars at Le Mans, which will be entered by Audi Sport Team Joest, the most successful Le Mans team of all time. In addition, Audi Sport Team Joest will contest the Intercontinental Le Mans Cup (ILMC), consisting of a total of seven endurance races on three continents (including the Le Mans 24 Hours) with two cars. At the opening race at Sebring on March 19, the team will use two "R15 plus plus” cars. "Sending the R18 into a race at such an early point in time would be difficult in terms of logistics and interfere with our development program,” explains Head of Audi Motorsport Dr. Wolfgang Ullrich.

Dual project in the DTM

In parallel to the commitment with the R18 in the sports prototype class, Audi aims to bring the DTM title back to Ingolstadt and Neckarsulm. As the DTM technology freeze continues in 2011 the main focus for the engineers at Audi Sport during the winter will be placed on development work with the DTM’s new exclusive tire partner. "In 2010 the tires were a really crucial topic which caused us to fall a little behind our competitor,” says Dr. Martin Mühlmeier. "This mustn’t happen again.”

As before, Audi Sport is again planning to field a total of nine vehicles entered by the proven Audi Sport teams Abt Sportsline, Phoenix and Rosberg. The driver line-up will only be decided in January of next year.

But not only the twelve DTM events (including one show race at the Olympic Stadium in Munich) have to be tackled in 2011. In addition, Audi Sport is working on the successor model of the current Audi A4 DTM, internally designated as the "R17,” for the new Technical Regulations that will come into effect in 2012. The first tests are planned for next summer.

Customer sport to be expanded and restructured

AUDI AG’s customer sport program that was launched in 2009 will be expanded and restructured. The responsibility for the further development of the Audi R8 LMS, sales of the vehicles and technical support for the worldwide customer and importers teams has been delegated to quattro GmbH.

Whereas the main focus was previously on Europe, the Asian market will be served as well in 2011.

In addition, Audi is planning a modular customer sport concept that will include an endurance version of the TT RS and a GT4 version of the Audi TT. The TT RS has already successfully completed first runs on the Nürburgring-Nordschleife and will continue to be developed during the winter. A concept of the TT GT4 was presented at the DTM race meeting in Shanghai. Delivery of the first customer vehicles is planned for 2012.

2012 BMW 650i Convertible Shown Ahead of Detroit Debut