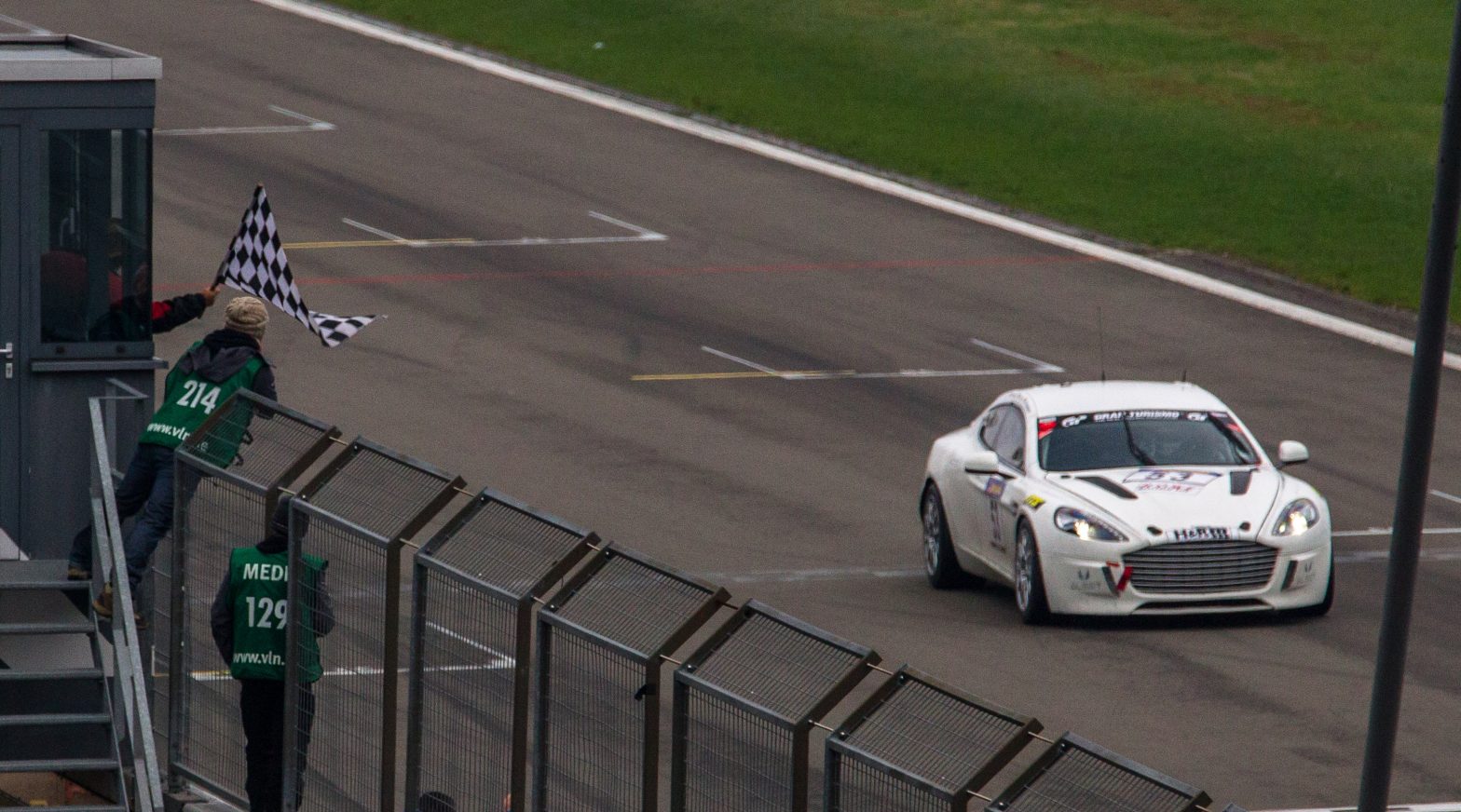 The first hydrogen-fueled, CO2-emission-free lap took place at the Nürburgring, in a version of the Aston Martin Rapide S, piloted by CEO Dr. Ulrich Bez. Next month, the Hybrid Hydrogen Rapide S will race alongside other GT cars at the 24 Hours of Nürburgring race.
While this historic test lap was performed using only hydrogen for fuel, the car uses a hybrid system that combines the hydrogen system with a tradition gasoline powerplant (well, as much as a 6.6-liter V-12 can be considered “traditional”). The Nürburgring race can run on hydrogen alone, gasoline alone, or a blend of the two.
The hydrogen is stored in a carbon-fiber tank with a 3.5-kilogram capacity, that will be refueled, along with the gas tank, after each racing stint. When running solely on hydrogen power, the car emits water instead of carbon gasses that go along with burning petroleum fuels.
Aston Martin hopes to complete many zero-CO2 in the experimental E1-XP classat the 24 Hours of Nürburgring on May 19.
Scroll down for more details in the press release from Aston Martin.

Aston Martin makes Hybrid Hydrogen history at Nürburgring
Aston Martin has secured its place in the history books with a world first hydrogen-fuelled zero CO2 emission lap of the 24 km Nordschleife circuit in Germany.
The lap was completed on Saturday (27 April) with Aston Martin Chief Executive Officer Dr Ulrich Bez at the wheel of the prototype Aston Martin Hybrid Hydrogen Rapide S, and was a perfect test run ahead of a formal record-breaking attempt at the ADAC Zurich 24 Hours of Nürburgring (N24) next month.
Aston Martin engineers were using the four-hour ADAC ACAS H&R-Cup VLN series race as a shake-down and test session ahead of the gruelling 24 hour race next month in which the Hybrid Hydrogen Rapide S will line-up alongside a world-class field of some 200+ GT cars.
Development of the ground-breaking hybrid system – created by technical partners Alset Global and pioneered by Aston Martin in the race – has exceeded expectations, leading to the historic hydrogen-only lap of the infamous ‘green hell’ on Saturday afternoon.
Dr Bez said: “I am incredibly proud of the Aston Martin team, and our partners Alset Global. We have written a little motorsport history with this qualifying lap as well as finishing the four-hour race on hydrogen and, of course, it bodes extremely well for our participation in the 24 Hours of Nürburgring in three weeks’ time.
“To have run full laps on hydrogen gas alone during the four-hour event is an exceptional ‘first’. We continue to improve the system and I now hope that we can complete the 24-hour race on May 19 with many zero CO2 emission laps.”
David King, Director of Special Projects at Aston Martin and the man leading the Hybrid Hydrogen Rapide S project, said: “This achievement should leave no one in any doubt that the system we have developed with Alset Global is a viable and exciting option for the future.
“The creation of the Hybrid Hydrogen Rapide S was, for Aston Martin, another high profile way for us to mark our centenary in 2013, and to demonstrate our engineering capabilities in the most demanding environment of a major endurance race. This is the ultimate expression of our long term strategy of using the Nürburgring 24h race to publicly demonstrate the abilities of our cars and our people.”
When it competes at N24 the Hybrid Hydrogen Rapide S – based on Aston Martin’s new four-door, four-seat sports car – will become the first hydrogen-powered car to compete in an international event as well as the first zero CO2 emissions sports car to complete a race pace lap at the Nürburgring 24-hour race. The car will compete in an experimental class (E1-XP) having passed rigorous technical and safety assessments by the German motorsport authority the DMSB to be granted approval to race.
It will be able to complete full laps with zero CO2 emissions and will be refuelled after each stint with 3.5kg of hydrogen as well as gasoline.
Working in partnership with hydrogen experts Alset Global, Aston Martin’s engineers have developed a prototype twin turbocharged 6.0-litre V12 engine that powers the Nürburgring car.
Capable of running on pure gasoline, pure gaseous hydrogen, or a blend of both, the Hybrid Hydrogen race car showcases Aston Martin’s commitment to engineering innovation. In pure hydrogen mode the car emits virtually only water from the exhaust.
The Hybrid Hydrogen system comprises a hydrogen fuel rail, storage tanks and proprietary engine management system. Safety is paramount and the system includes four ultra-high strength carbon fibre tanks holding a total of 3.5kg of hydrogen stored at a pressure of 350bar.
The race car is based on the new Rapide S four-door sports car arriving in Aston Martin showrooms worldwide this month.
Aston Martin competes in the ADAC Zurich Nürburgring24 Hours on May 19-20 for the eighth successive year.
Tags:
Aston MartinHybridUlrich Bez