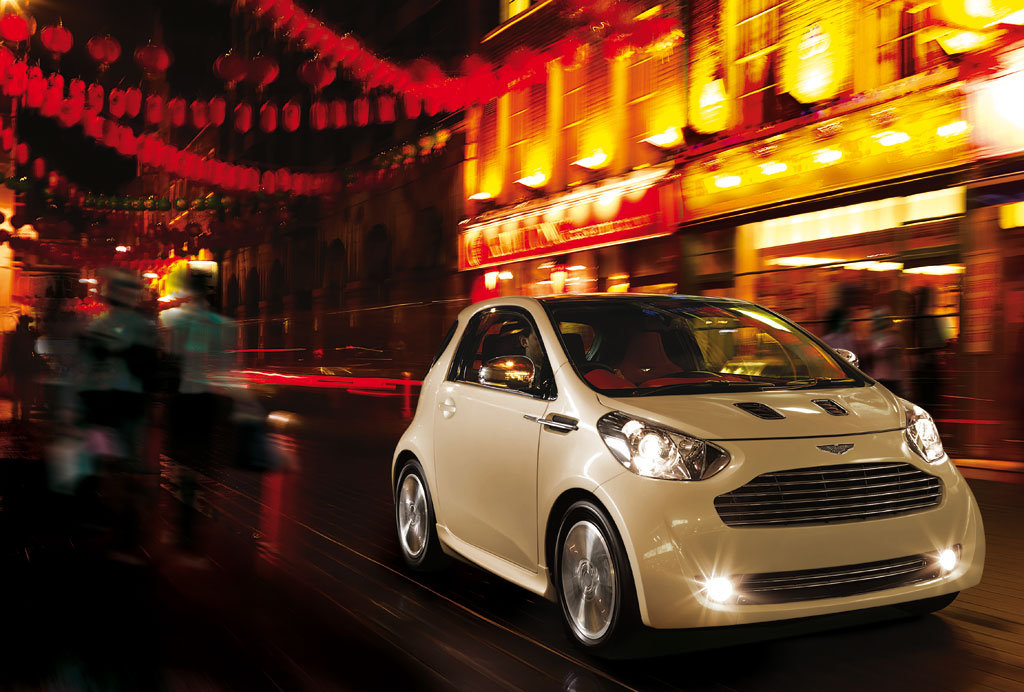 Even though brand purists will probably be screaming bloody murder, and David Brown may be doing back flips in his grave, Aston Martin has officially approved the Toyota iQ-based Cygnet for production. The diminutive city car will receive an extensive revamp before it can wear the winged Aston Martin logo. The car will have new exterior body panels and a redesigned interior. Aston Martin is claiming the Cygnet will offer the same tailor-made feeling as one of the brand’s luxury GT cars. While details on this tailor-made feel are sketchy, expect a large crop of exterior colors, interior trims, and upholsteries to be made available to demanding customers.

We suspect Aston Martin’s decision to produce the Cygnet also had a lot to do with more stringent emissions and fuel economy regulations, both in the US and abroad. The city car should sell in sufficient enough numbers, relative to Aston’s GT cars, to make a noticeable impact on the British marques fleet ratings.
Aston Martin expects to sell the Cygnet to current customers who may want the luxury of their DBS or V8 Vantage when running errands, but don’t want the worry or hassle of driving the sportscars in crowded areas. As Dr. Ulrich Bez, Aston Martin’s CEO says, “Our customers need a small car for urban and city use, and they want the right tools for the right job, to downsize creatively without compromising intelligence, artistry and personality.”
Aston Martin hasn’t released pricing, availability, or any mechanical specifics yet, but plans to release further details towards the end of the year.
Please scroll down for the official press release from Aston Martin.
Aston Martin Cygnet Confirmed for Production
Innovation, Luxury and Individuality
•          Aston Martin Cygnet to become a production reality in 2011
•          Designed and built at Aston Martin’s Gaydon headquarters
•          An Aston Martin tailor fit solution for the city offering luxury and individuality
Gaydon, 11 October 2010 – Aston Martin is pleased to confirm that the Cygnet luxury city car – originally shown as a concept car in March – is to go into production in 2011 at the company’s Gaydon headquarters in Warwickshire.
The Aston Martin Cygnet is a city car that sets a new benchmark for compact luxury, building upon nearly a century of experience building high performance sports cars, luxurious long-range grand tourers, and extremely competitive racing machines.
Cygnet demonstrates Aston Martin’s commitment to innovation and integrity.
“It is time to think differently. Aston Martin is honest and we don’t make compromises” says Aston Martin CEO Dr Ulrich Bez.
“Whatever we do, we do right. If we do performance, we do performance; we don’t downsize or compromise our sports cars. The Cygnet needs to satisfy the demands of emissions and space. It is a car without compromise, just like every othe Aston Martin.
“Our customers need a small car for urban and city use, and they want the right tools for the right job, to downsize creatively without compromising intelligence, artistry and personality.”
Cygnet expresses a simple but fundamental idea: in the modern city, scale equates to speed and freedom. At just three metres long, the Cygnet gives the driver a new dimension of freedom, able to slot into gaps in traffic, exploit the smallest parking spaces, consume the least fuel and emit the lowest emissions, all while delivering exceptional levels of quality and comfort.
“Cygnet is small but luxurious, an Aston Martin tailor fit for the city,” says Marek Reichman, Aston Martin’s Director of Design. With an almost unlimited palette of materials, colours and textures, each hand-finished Cygnet will be truly unique, a personalised space within the city. “Luxury is not constrained by scale.”
Cygnet is a product of Aston Martin’s unrivalled experience in craft, technology and design. The future city will present a very different luxury brand landscape, as social change and legislation increases the division between urban and anti-urban product categories. With the Cygnet, Aston Martin will be at the forefront of these changes, ensuring the company’s enduring brand image will continue to prosper in new market conditions.
Dr Ulrich Bez continues: “The Cygnet is designed to support our sports cars by providing a greater degree of freedom in the urban context; it is a very special car, a premium but compact package with heart, soul and personality.”
The Cygnet, a tailor fit solution for the city, will help drive Aston Martin into the future. “This car is reality; Cygnet is the natural choice for those who want a premium, bespoke commuter car.”
Further details on the Aston Martin Cygnet including pricing and specification will be announced later this year. The Cygnet will be the eighth major production car    Aston Martin has introduced at its state-of-the art factory since 2004, offering further evidence of the company’s ongoing commitment to British manufacturing, backed-up by a dedicated local workforce and supplier network.
Tags:
Aston MartinCity CarcygnetiQToyota