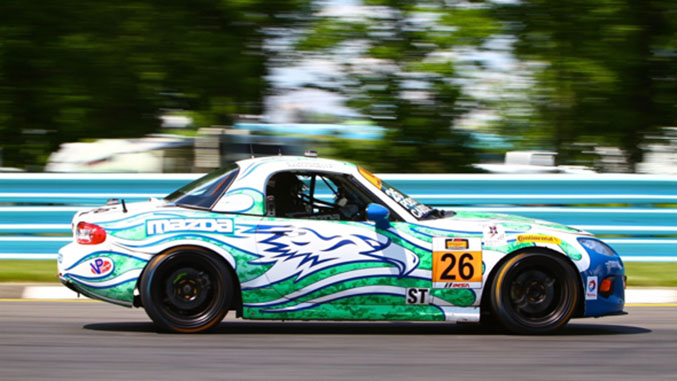 Pro and club racer Andrew Carbonell recently sat down with the folks at Mazdaspeed to discuss the finer points of braking techniques to help maintain your pace. The most important aspect of the braking process differs depending on who you ask. Some say that the key to being fast is how soon you get on the throttle, while others will tell you it’s how late you get on the brakes. But for Andrew it’s not about getting on the brakes or on the throttle, it’s about when you get off the brakes that matters the most.
“I make a point on the whole brake release,” Carbonell says. “To me, the most important part of racing is not overslowing.”
With cars like the MX-5, which excel in the corners more so than on the straights, that can be especially true. In addition to being a driver coach, Carbonell races a Spec Miata in SCCA Club Racing and a Freedom Autosport MX-5 in the IMSA Continental Tire SportsCar Challenge Street Tuner class, so it’s safe to say he’s got a fair amount of experience on the subject.
“I think the important thing isn’t braking at the limit, as much as it is not braking too much. That’s the thing that, as a racecar driver, you’ll catch yourself lap after lap thinking, ‘Oh, I could have rolled through that corner a little faster. I could have come off the brakes just a bit sooner."

Andrew also points out that keeping an eye on exit speed through a corner will help you practice and perfect your brake release technique. "Anyone can say, ‘Brake at the 3 board’ and any old Joe is going to brake at the 3 board. But how does that Joe release that brake and roll speed through that corner?”
While Carbonell says there isn’t a specific recipe for success, he does have a few pointers for fine tuning your technique:
“For the MX-5, you kind of just remain on the brake, get the weight on the nose, get it turned and, once you get down to a certain speed, you know that the car is going to roll through the apex once you come off the brakes. A heavier car or one that is lighter on the nose, you want to hold it all the way to the apex because it’s not going to turn. Then you come off the brakes. It’s the timing of how long and hard you held the brakes, how you made it to the apex.”
Now more than ever, racers know how critical braking is to fast lap times and staying competitive in wheel to wheel racing. However, it still remains an aspect of race technique that is often overshadowed by the desire to go fast.
"It doesn’t matter what car you’re driving, it doesn’t matter how fast you’re going – once you jump on the brakes it all becomes very similar and it all turns into the same thing more or less," says Andrew. "The whole part of jumping on the brakes and programming yourself to come off them and roll your speed through the corner is part of racing I’m fascinated with.”
Tags:
Andrew Carbonellbraking techniquedriver coachMazda MX-5