WRR TV: Patience Is A Virtue 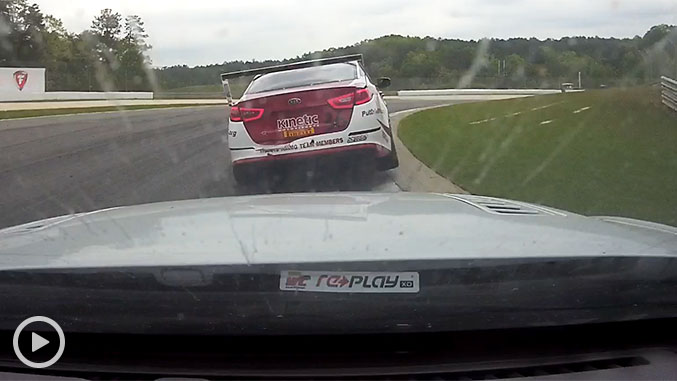 Ride along onboard with Spencer Pumpelly, of Atlanta, Ga., in the No. 87 DWW Motorsports iTrackzone.com Ford Mustang Boss 302 in GTS Race 2 at Barber Motorsports Park in the Pirelli World Challenge Series.
Starting on the grid in 10th position, Pumpelly locks into a fast pace and continues to reel in competitors as the race progresses. He would end up on the podium, finishing second to Kris Wilson in the No. 07 TRG-AMR Orion/Royal Purple/PassTime USA Aston Martin Vantage GT4.
Excerpted from the Pirelli World Challenge race report:
Off of the start, Baldwin took the lead into turn one of the 2.38 mile, 17-turn road course. By turn eight of the first lap, Wilson made a bold move to take over the lead from Baldwin with Clucas pursuing them in third Another driver on the move was Kurt Rezzetano, of Phoenixville, Pa. in the No. 37 Phoenix Motorsports/Calvert Dynamics Ford Mustang Boss 302 who had moved up from his starting position of 5th after Baldwin’s Porsche suffered a transmission failure on lap two which resulted in his retirement from the race. The No. 73 slowed to a stop in turn four which brought out the first caution of the race.
The two fastest laps of the race were set on lap 11 and lap 13 and they would foreshadow events in the second half of the race. Wilson turned a 1:32.839 on lap 11. Then the second fastest lap was set by Spencer Pumpelly, of Atlanta, Ga., in the No. 87 DWW Motorsports iTrackzone.com Ford Mustang Boss 302 with a 1:32.923. After starting 10th, was finding his way toward the front and he was already up to sixth by lap 11.
On lap 14, Wilkins’ Optima began to have an issue that moved him back to 14th. By lap 15, he was forced to retire on track, which caused the next full course caution. Just before the caution, Pumpelly had passed Giglotti for fifth. With Wilkins out this moved Pumpelly into fourth.
For the restart on lap 17 it was Wilson, Clucas, Aquilante, Pumpelly, and Giglotti. This top 5 order stayed the same until lap 22 when Pumpelly was able to nudge his way past Aquilante for third. Within a lap he was now on the rear bumper of second place Clucas. Over the next five laps, Pumpelly repeatedly made attempts to pass Clucas, finally making the pass for second position stick on lap 27 and this solidified the final order of the top 5. Pumpelly’s pass of Clucas was awarded the Cadillac ATS-V Move of the Race. During the battle between Pumpelly and Clucas, Wilson had checked out eventually taking the checkered with a seven-second margin over Pumpelly in second. Clucas finished third, Aquilante fourth, and Giglotti in fifth.
Follow all the action on the Pirelli World Challenge homepage!
Have you subscribed to the Winding Road Racing YouTube channel yet? We post new racing videos like these every week, so give us a click if you want to make sure you don’t miss any of the latest clips.
Tags:
pirelli world challengePOV car video