WRR Interview: Secrets Of Making The Transition From Simulator To “Real” Race Car 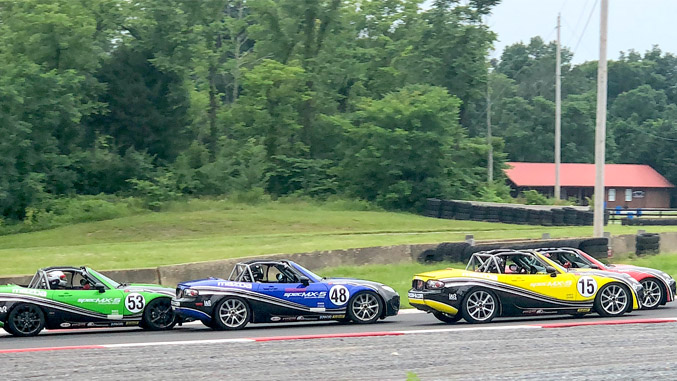 Editor's note: John Allen is a Spec Miata and, in 2018, a Spec MX-5 Challenge pro driver. In Spec MX-5, he has been on pole twice in six races, demonstrating the skills he built on iRacing. He got his start in simulators and his quick transition from sims to the front of the pack in road racing caught our attention. This is a scenario we've seen before (e.g. with Mark Drennan and Glenn McGee), so we interviewed John to get his thoughts on making the transition from sims to "real" cars.

WRR: How did you get started in road racing?

JA: Before I got my competition license in 2017, I had been using iRacing Motorsport Simulations for over 5 years. The very first car most iRacing members are introduced to is the NC MX-5. I drove over a thousand races with that car over a 3 year period until the ND came out. There is no doubt in my mind that the "seat time" I accumulated on iRacing built a strong foundation of muscle memory that I now get to apply to the real world version of the same car (the Spec MX-5, which is based on the NC Mazda MX-5).

WRR: It sounds like drivers should expect to spend a lot of time driving on the simulator to build their skills?

JA: Yes! One of the obvious benefits of simulators is that the cost per hour is almost zero. On the other hand, in a real race car, it is very expensive to run laps because you use up tires and gas and oil, parts break and you have to pay for track time. What I find many drivers don't quite realize is that this means that on iRacing you can be driving and racing more than even a pro driver on a big budget would. If you do the math, I drove a race every day for 3 years. That's a lot of experience — more than most drivers of real race cars will get in a lifetime. And the total cost of computer, hardware, iRacing membership and content over those 3 years cost me less than renting a real car and hiring professional coaching for just one weekend.

WRR: How does the simulator help with the transition to real race cars?

JA: It's still a "just" a simulator and there are some missing feedback inputs. Everybody processes stimuli differently, and certain senses may outrank others. But for my own personal experience I can say that iRacing did wonders for me, especially having the opportunity to use it at length BEFORE ever climbing into the real car. This meant I got used to driving the car without the inputs of g-forces, suspension or hydraulic pedal feel. So when I finally climbed into the Spec MX-5 I daresay it was almost easier to drive than the simulated version. Finally getting the comprehensive seat of the pants feel meant my mind no longer had to manufacture those inputs and was free to focus on other things about the experience.

WRR: Is the transition to racing on track especially difficult? It seems like you "got it" fairly quickly.

JA: The biggest challenge initially is confronting the financial and mortality aspects of racing. If it all goes wrong in the simulator there is no bill for damages or pain of injury. You hit reset, sign up for the next race and try again. With real cars, be prepared for everything to cost twice as much as you expected, so you're less disappointed when it actually does. And mentally you have to have the courage to break through the fear wall and commit to driving at the limit with the addition of physical risk to the equation, but be disciplined and respectful enough to not put other drivers in unacceptable danger when jostling for position at high speed. In short, if you use a simulator like iRacing and want to go racing for real then take the opportunity to build real race etiquette and habits that will translate well when the time comes. It's tons of fun as a recreational video game too, but the mental approach is completely different if your goal is to drive in a high-level series like Spec MX-5 Challenge.

Video: How To Win From P4