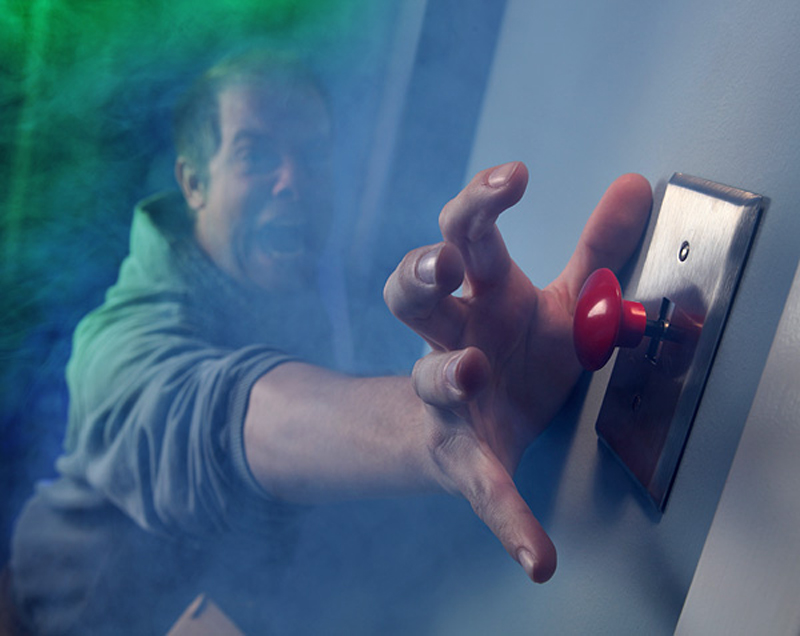 Brook & Hunter Premium Mo-Tool Axe
Who doesn’t love a good multitool? We’ll tell you who: people who like to keep their belongings intact. This comes with several blades, a can opener, pliers, a file, screwdrivers…and if that can’t take whatever it is apart, you can smash it with the built-in hammer and/or chop it with the axe.

Want (wanttt.comt)
Looking to replace whatever it is you just destroyed with your multitool? Want keeps tabs on all the coolest new products, particularly gadgets and fashion items—many of which you probably never knew existed (like the glow in the dark contact lenses you see here)? Want is like our Hot List, only way more extensive and a lot less weird.

Panic Button Light Switch
This very important button mounts on your wall so whenever you feel the urge to sound the alarms, you can, well, turn off the lights. The Panic Button replaces your light switch, so you can feel like you’re starting a nuclear war every time you enter a dark room. It works as a dimmer too, for romantic mood lighting.

Kung Fu Vettel
We love watching Sebastian Vettel go fast, but now we get to see him kick ass (alongside actress Celina Jade, and an Infiniti FX) in this short film called Kung Fu Vettel: Drive Of The Dragon. Expect more creative advertisements featuring the Red Bull Formula 1 team in the near future.

DeLorean Bicycle
Even those of us not obsessed with automobiles are familiar with the DeLorean, but did you know there’s a bicycle sharing the same name? And yes, it’s is constructed of stainless steel. And, no, we don’t know what happens when it hits 88 miles per hour.

Tûranor PlanetSolar
This amazing solar-powered yacht is the largest of its kind, and the first to circumnavigate the Earth. Switzerland’s Raphael Domjan dreamed it up, had some help building it, then navigated it around the world. Gear Patrol has the story.

Brazilian Barbecue Briefcase
If you do decide to opt for the above hoodie for your next business meeting, may we suggest this as your go-to briefcase. It opens up and unfolds into a portable rotisserie barbecue grille. The spits are powered by a rechargeable battery, good for eight hours of slow roasting.

Robot Mind Control
Science, man! Yes, sometimes it can even be used for good. Take, for instance, Cathy Hutchinson, who has been paralyzed in all four limbs for 15 years. In this video, with a little help from our friend science, she controls a robotic arm with her mind. How cool is that?
+ The Hot List: Volume 37
+ The Hot List: Volume 36
Tags:
hot list