Why Are So Many Drivers Confused About Blocking? 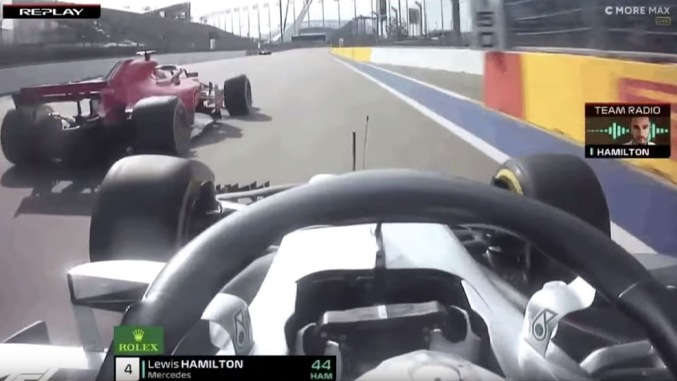 The purpose of this series is to look at televised pro racing events and suggest things club racers can learn from them. This requires a little bit of logic and imagination on the part of our readers. For example, we might imagine that F1 is run under NASA rules. It isn't, but to learn from other forms of racing you have to do this. We've seen many drivers do a poor, inverted imitation of what we're suggesting, for example, taking lessons from F1 and then applying them literally to club racing, imagining that club racing is run under FIA rules, with FIA stewards and FIA tech. It isn't, so they get in trouble. You have to be able to place racing examples in the correct context. Hopefully, these examples give you a chance to better understand what may happen when you're on track. Good luck and happy practicing!

This week, F1 went to Russia and we were again treated to a demonstration of blocking techniques. Impressive, to us, were the confusing justifications given by commentators Johnny Herbert and Paul DiResta. These guys are former F1 drivers, so you'd think they'd know more than club racers like us, but a stupid justification is a stupid justification even if Einstein gives it. More on that in a moment.

First, a reminder that pretty much every racing rule book has a prohibition on blocking. The FIA (covering F1) prohibits a driver from making "two moves", the idea being that the leading driver chooses his/her line and then has to stick to it and not perform an additional move in reaction to the following driver's choice of passing points. Typical club racing rule books (e.g. NASA and SCCA) are more general. They also usually include a requirement to allow racing room.

Now back to the stupid justifications. Vettel's and Magnussen's moves were justified on two grounds. First, the overtaking drivers were not yet alongside, so the driver ahead can do what he likes. That's just nonsense, because if the passing driver is alongside, we're not talking about blocking any more, we're talking about some other kind of move like "taking another driver out" or "crashing". Blocking, by definition, happens when the overtaking car is behind the leading car.

The second justification was that these blocks weren't "two moves" because both moves were in the same direction. This is stupid because it implies that each track only has two lanes (left and right) and thus any move from, say, the left, can only be a move to the right lane and hence there can be only one move because there is only one place to go. But many tracks are three, four, five or more cars wide in places, so pretty obviously you can move right and then move right again. Which is two moves, not one.

What we're pretty sure is going on here is that Herbert and DiResta and others who make excuses for blocking are really saying "we don't want the racing interrupted by penalties nor do we want the arbitrariness of penalties to affect the outcome". Which is to say, "we don't agree with the rules". That's different than saying the rules weren't violated, but perhaps there is some guidance from the broadcasters and sanctioning bodies to not criticize the rules. In any event, club and pro-am drivers watch F1 and other broadcast road racing and this sort of "bad logic used to make a point relevant only to televised motorsports" approach leads to confusion among drivers. We've had countless club drivers reference broadcast statements as if they were the correct rules.

F1 is F1, and is a different world from club racing. But are DiResta and Herbert right that, essentially, blocking should be allowed? We think not and here's the thought process. The logic against blocking is that blocking turns racing into a different and inferior and more dangerous sport. Without blocking, leading drivers have to run a clear line and following drivers know where the overtaking spaces are and have to get it done there. That's a big challenge. Racing is then about going faster than competitors under known conditions. We would note that MotoGP is pretty interesting racing and the lack of mirrors makes blocking harder. If MotoGP is racing without blocking, give us less blocking! OTOH, the argument goes that if blocking (and brake checking and forcing drivers off track and pit maneuvering etc) are allowed, racing also becomes about clever ways to ruin competitors' races without ruining one's own. The cost and risk of that just doesn't seem acceptable in club racing. In entertainment racing (i.e. "Pro" racing), it may be different.

In club racing, these things are mostly self-policed. This is also true in golf, and other sports. There can be a positive culture that develops around self-policing — one that is especially good for young people who are literally growing up in the sport. But don't look to F1 or F1 commentary for that culture. We have to build it ourselves, if that's what we want. Do we?

Why We Loved Running the NASA 25 Hours of Thunderhill

No Passing At COTA? You’re Doing Something Wrong.