The Three Priorities of a Race Start 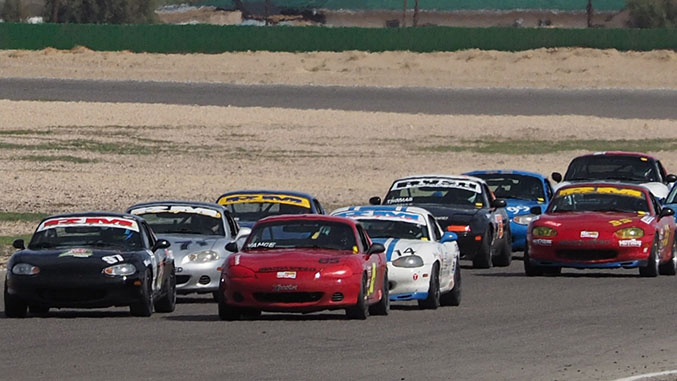 This issue of Speed Secrets Weekly is a little different in that it is entirely made up of my answers to readers’ questions. The first question – and a common one – is aimed at race starts, and is the focus of the main article. While many queries have been specifically about where to position one’s car, when to begin accelerating, or how to jump the start, they all boil down to this one question: How do I get the best possible race start? – Ross
Since we’re talking about race starts, let’s begin at the beginning. When does a race start? If you said when the green flag falls, you’ll likely be left behind.
Really, the start begins on the pace lap.
The driver who gets his or her tires and brakes to optimum operating temperatures is in a better position to race on the first lap. The best way to build heat in tires is actually from the inside. Heavy braking raises the temperature of the brake rotors and pads, then the calipers, then the upright, the wheel, the air inside the tire, and ultimately the tire itself. One way to think about this is that you’re not just building heat on the surface of the tire, but your job is to get the tire pressures up to their ideal, and the best way to do that is to work from the inside-out.

Lots of accelerating and braking will do far more than weaving around will. As engineer, Paul Haney, pointed out in an article he wrote last year (Issue #10, July 9, 2013), weaving back and forth across the track does nothing to build heat in the tires. Sure, it helps give a driver a feel for the car and track, and much like a golfer swings a club to loosen up before teeing off, it can get you in a rhythm. Weaving will also help clean any build-up off your tires. But if your goal is to heat up your tires, stick to heavy acceleration and braking. That will likely mean hanging back a little, accelerating hard for a distance, and then braking hard. The longer you can brake, the better. In fact, short stabs at the brakes don’t do much, either. As for dragging the brakes with your left foot while accelerating, that’s usually a good technique, but it can backfire with some brake pads. If you’re not braking hard enough, you can get some surface heat and almost glaze the pads – when they’re up to optimum temperature, they won’t brake as well. So, again, even if you brake against the throttle, make the braking long and hard.

There are all sorts of mind games one can play on pace laps, some worth doing, and some not. I’m a big believer in focusing on your own performance, and not getting overly caught up in some of the silly games drivers try to play. However, part of getting yourself ready to perform will have an impact on your competitors. What I’m talking about here is setting a tone, and letting the drivers around you know that you mean business – you won’t be pushed around, and you’ll be the assertive one. For example, let’s say you’re lining up on the outside of the second row for a race. Typically, you’ll spend a portion of the pace lap in single file, which should mean that you’re the fourth car in line. In many series, that doesn’t stop you from crowding the third place car, and even running up beside him – and past, even. It tells him that you’re going to be all over him, or in front of him once the race starts. Most important, this assertiveness on the pace lap gets you in the right mindset or state of mind. It’s a trigger.

As you approach the start, lined up two-by-two, in a perfect world you’d be able to hang back even just a few feet, then anticipate the start and begin accelerating a fraction of a second before anyone else. If that works, great. If it doesn’t, it wasn’t a smart gamble.

Going back to my first question of when a race starts, waiting for the green flag can be a mistake. Unless you’re on the pole – and even then, sometimes – the race starts the second that any driver begins accelerating. Too many drivers wait until they see the green flag (or are told "green, green, green" over the radio) before starting to accelerate. You’re going to get swallowed up by the pack if you wait. Go the second anyone else goes.

If you are on the pole, and I hope you are, then it’s up to you when you begin accelerating – mostly. Most series have rules about how early you can begin accelerating, and typically it’s marked with an orange cone or two. But the second you’re even with them, it’s up to you whether you begin accelerating right there, or wait a little longer. Of course, the second the starter throws the green flag, the pack will begin accelerating. Unless you go with them, you’re going to lose positions. In fact, just letting others begin to accelerate before you do will likely mean losing your hard earned pole. So take advantage of that start position by beginning to accelerate before everyone else does. Yes, it takes a bit of guesswork to judge when you should start at or after the beginning of the "acceleration zone" and before the starter drops the green.

It’s important to go watch the starts of the other races before yours. Make note of when the starter typically throws the green flag, and especially watch to see if he or she signals the green flag in any way. This could be a slight movement of the shoulder, a turn of the head, or any "tell" like that. It’s a bit like a batter reading a pitcher – if you can get even the smallest fraction of an advantage over others, it’ll pay off.

As the pole sitter, you have the ability to set the pace as you approach the start, within reason. You’re supposed to maintain pace car speed, but you can alter that a little, up or down, to match the ideal RPM and gear for your car. Experiment with your car to determine what gear and RPM it best accelerates at – that’s the speed you want to be doing when you approach the starter.

In order, here are your priorities at the start of a race:

1.      Gain positions.
2.      Maintain your position.
3.      Position yourself to pass other cars on the first lap.
Having said all of that, I believe the most important thing you can do to prepare for race starts is to prepare. Primarily that means your mindset. If your mindset is "I’ll just get through the first lap…" you’ll likely lose positions on the first lap. If you mindset is "I’m going to the front," or "I’m staying at the front," then you’re more likely to do that. It’s less about the technique of starting, and more about your expectations, and your mindset, than anything else.

This mindset is something you program using mental imagery. Yes, it’s impossible to imagine every single scenario that could happen at the start of a race, since there’s an infinite number of them. But you can prepare your mind by running as many as possible, and then programming an "I’m ready for anything" mindset.