Ten of the Most Grueling Rally Events Ever Held 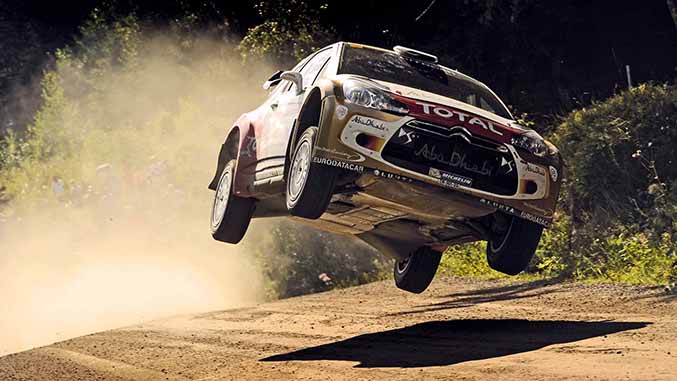 For well over a century, car racing has been a way to push both men and machines to their absolute limits. In the early days of motorsports merely finishing an event was considered an astonishing feat, but competitors began to look for new ways to challenge themselves as cars got faster and more reliable.
The on-going quest for new challenges has taken rally drivers to some of the most hostile regions planet Earth has to offer. We’re taking a look at ten of the most grueling rally events ever held. Let us know what one(s) you think we left out in the comments section below.

1. Acropolis Rally
The Acropolis Rally has been held in Greece since 1953. It traditionally takes place in the summer so it is notorious for its hot temperatures. Some pilots have reported seeing temperatures as high as 122 degrees in the cockpit of their car.
Rocks on the gravel stages present another sizable challenge. Advancements in tire technology have facilitated the task of getting through the event without having to change a wheel, but hitting too big of a rock can wreak havoc on suspension, brake and steering components.

2. Baja 1000
Photo courtesy of Truck Trend
The Baja 1000 has been held in the Baja California region of Mexico since 1967. All kinds of vehicles are eligible to participate in the Baja including production cars, trucks, buggies and ATVs. The first edition was won by a Volkswagen-based Meyers Manx, a victory that helped turn the buggy into an American icon.
A big part of what makes the Baja 1000 so challenging is that the course is routinely booby-trapped by spectators who dig holes and build make-shift jumps. The Baja is so grueling that Ford tested the durability of the new 2015 F-150’s aluminum structure by secretly entering a completely disguised prototype in the 2013 edition of the race.

3. Bank Utama Rally – Rally Indonesia
Photo courtesy of Automobilsport.com
The Rally Indonesia (formerly known as the Bank Utama Rally) arguably takes a bigger toll on drivers than it does on cars. It takes place within a stone’s throw of the equator so temperatures reach scorching highs and humidity sometimes rises to 90 percent. In the late-1990s, participants reported they found themselves drinking over two and a half gallons of water throughout the day.
That’s not to say the cars have it easy. Torrential rains are capable of suddenly turning the course into an endless stretch of mud, making it exceedingly difficult to drive in a straight line. The tough road conditions pushed Pirelli to design an unusually narrow tire specifically for the Rally Indonesia in the late 1990s.

4. Camel Trophy
Introduced in 1980, the annual Camel Trophy was sometimes called the Olympics of 4×4. Generally sponsored by Land Rover, the event blended exploration with competition by taking participants across entire continents, sometimes in terrible weather conditions. Organizers were known to deliberately steer racers through monsoons.
In the late 1990s, the event started to shift its focus and include other kinds of sports like kayaking and mountain biking. Land Rover stopped sponsoring it in 1998 and the last Camel Trophy was held in 2000.

5. London-to-Sydney Rally
Photo courtesy of Hooniverse.com
The London-to-Sydney Rally was the brainchild of three journalists looking for an innovative way to boost British exports all around the world. The journalist reasoned that folks would be more inclined to buy a British car after seeing one rip up dirt roads in the countryside.
The first London-to-Sydney Rally was held in 1968. Starting in London, it took cars across Europe and the Middle East through cities like Paris, Turin, Istanbul, Tehran and Kabul before reaching Bombay, India. From there, participants embarked on a nine-day boat trip to Perth, Australia, and continued to race for about 2,600 miles until they reached Sydney.
The race was opened to all kinds of cars so odds are the effect it had on the British car industry was negligible at best. It was held again in 1977, 1993, 2000 and 2004.

6. Paris – Dakar / Dakar Rally
The annual Dakar Rally was called Paris – Dakar when the first edition of it kicked off in 1978. As the name implied, the event took competitors from Paris, France, to Dakar, the capital of Senegal. The race was difficult because participants had to deal with extreme heat, challenging terrain and the possibility of getting lost in the dunes. Mark Thatcher, the son of British Prime Minister Margaret Thatcher, famously spent six days wandering around the desert in his Peugeot 504 station wagon before an Algerian plane located him and his team 30 miles off course.
The Paris – Dakar was canceled in 2008 due to terrorist threats made against the participants. The race was held again the following year in Chile and Argentina and re-christened Dakar Rally. The two week-long event has been held in South America since and, although the landscape is different, it is just as tough.

7. Paris – Madrid
The Paris – Madrid was held in 1903, when racing often meant going from one city to another on dirt roads that generally remained opened to the public. The epic race kicked off in Versailles, France, on May 24th and it was scheduled to end in the Spanish capital about three days later.

The French parliament canceled the race in Bordeaux – about 350 miles away from Versailles – after mere hours of racing because there were already too many deadly accidents. One of the better-known casualties was 31-year old Renault co-founder Marcel Renault. The Paris – Madrid was never held again.

8. Rallye Bandama / Rallye Côte d’Ivoire
The Rallye Bandama (named after a river in Ivory Coast) is remembered as the first international rally that proved it was possible for none of the entrants to make it to the finish line.
The 1972 edition of the race was scheduled to take participants through about 2,500 miles of difficult terrain at a relatively high average speed of 60 mph. A vast majority of the cars progressively abandoned after falling victim to mechanical issues and/or adverse weather. In the end, the only remaining car was Tony Fall’s Peugeot 504 but it had fallen so far behind that the organizers assumed it wasn’t going to reach the finish line and disqualified it. The race was canceled with over 800 miles left to go.

9. Safari Rally
The Safari Rally was first held in 1953 to celebrate the coronation of Queen Elizabeth II. The first few editions of the rally took racers through over 3,700 miles of rough and sometimes uncharted terrain across Kenya. The event was shortened considerably when it was integrated into the World Rally Championship in 1973 but it remained one of the tougher stages.
Competitors had to deal with mud, dust and wild animals. Dangerous collisions with animals became so common that organizers sometimes used helicopters to scope out the road ahead and warn racers when they detected wild herds of gazelles, buffaloes and even elephants.
The Safari Rally is still held today but it is no longer part of WRC.

10. 1000 Lakes Rally / Rally Finland
The Rally of Finland is known as Grand Prix of Rallying because it is one of the fastest events in WRC. Many competitors say that it is virtually impossible to master the course due to a dangerous combination of crests, turns and jumps that come in rapid-fire succession.
Interestingly, Scandinavian natives have historically dominated the Rally Finland. To date, the only five non-Scandinavian pilots that have managed to win the event are Carlos Sainz, Didier Auriol, Markko Märtin, Sébastien Loeb and Sébastien Ogier.
Tags:
DakarrallyTop 10