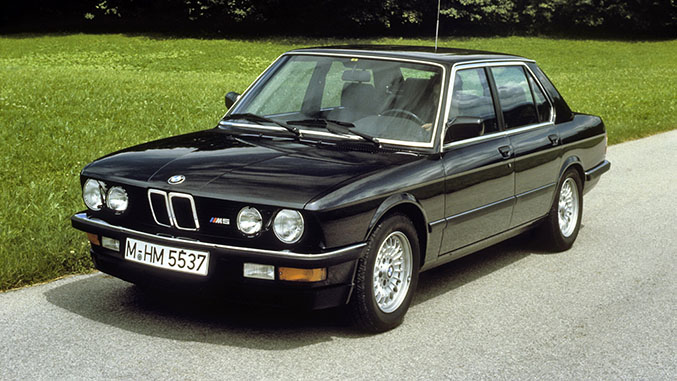 In the 1980s, automakers started turning towards high-tech electronic equipment like on-board computers and digital instrument clusters. Some companies went as far as designing software that actually talked to the driver if a door wasn’t fully closed or if the oil level was low.  A lot of the driving aids that we take for granted today were born in the 1980s, even if they didn’t become widespread until much later.
Ever-stricter emissions regulations loomed over the industry like a bad hangover from the 1970s.  This made it difficult to design and build a sports car, especially one with a high displacement engine, but many companies accepted the challenge and went on to build cars that are still great to drive today.
Avoiding obvious (and essentially unattainable) entries like the Porsche 959 and the Ferrari F40, we’re taking a look at ten cars introduced in the 1980s that every enthusiast should drive at least once in his or her life.  Let us know in the comment section below what car(s) you think should be on the list and why.

Audi Quattro
The original Audi Quattro was the first regular-production performance coupe to feature all-wheel drive, a setup that was generally reserved for off-roaders at the time.  Audi inherited all-wheel drive technology from DKW, and story has it engineers toyed around with the idea of applying it to a sports car after noticing that the Volkswagen Iltis was capable of out-performing nearly every car in the snow.
Although the Quattro is best remembered for its victories in the FIA’s Group B class, it has also gone down in history as the first production car to offer both all-wheel drive and a turbocharger.  The coupe was initially launched with a 2.1-liter turbocharged five-cylinder engine that made 200 horsepower, and the final examples were offered with a 20-valve 2.2-liter unit rated at 220 ponies.

BMW M5
BMW didn’t invent the sports sedan but it certainly helped fine-tune the concept when it shoehorned an evolution of the M1’s 3.5-liter straight-six into the engine bay of an e28 5-Series.  Linked to a five-speed manual transmission that spun the rear wheels, the Euro-spec version of the six-cylinder propelled the hot-rodded e28 from zero to 62 mph in a little over six seconds.
BMW wanted the M5 to retain a low-key look.  The main differences between it and a stock e28 were large alloy wheels wrapped by Michelin TRX tires, a lowered ride height, a small lip spoiler up front and model-specific emblems on both ends.  Under the skin, the M5 featured a sport-tuned suspension, larger disc brakes to keep the power in check and a limited-slip differential.

Buick GNX
The Buick GNX was the ultimate evolution of the Grand National.  Developed jointly by Buick and McLaren Performance Technologies, the limited-edition GNX was powered by an upgraded variant of the Grand National’s 3.8-liter V6 mill that was tuned to generate 300 horsepower and a healthy 400 lb-ft. of torque.  The sprint from zero to 60 mph took just 5.5 seconds.
Only offered in 1987, the limited-edition GNX sold out almost immediately even though it cost more than a base-model Corvette.  Today, it still stands out as one of the most innovative American sports cars of the 1980s because it helped proved once and for all that muscle cars didn’t necessarily need to have a V8 under the hood.

Chevrolet Camaro IROC-Z
Chevrolet introduced the IROC-Z option package to the Camaro lineup in time for the 1985 model year.  Named after the International Race of Champions, the IROC package added a host of suspension modifications that provided a noticeably tighter handling, enabling the driver to exploit the Camaro’s full potential.  Top of the line cars were fitted with a 5.0-liter V8 engine that made 215 horsepower and 275 lb-ft. of torque thanks in part to the same Tuned Port Injection (TPI) system that was found under the hood of the Corvette.
In 1985, IROC-equipped cars stood out thanks to a model-specific front fascia, 16-inch alloy wheels and a host of aerodynamic add-ons such as side skirts and a lip spoiler.  The IROC-Z package could only be fitted to the Camaro Z/28.

Ford Mustang SVO
Buick wasn’t the only American automaker trying to replace raw displacement with forced induction in the 1980s.  Desperate to keep the muscle car alive, Ford formed a new division called Special Vehicles Operations (SVO) in 1981 and asked it to develop street-legal performance cars built using technology gleaned from the race track.
One of SVO’s first projects was to rejuvenate the third-generation Fox-platform Mustang by tossing out the range-topper’s 5.0-liter V8 engine in favor of a turbocharged 2.3-liter four-banger.  The swap was highly controversial at the time but enthusiasts started warming up to the idea when they found out the turbo four made 175 horsepower – the same as the V8 – and 210 lb-ft. of torque.  The eight-cylinder’s torque checked in 240, but it was also a much heavier lump.
A lighter overall weight as well as upgraded brakes and suspension components helped the turbo four-powered model out-handle and out-brake its V8-equipped counterpart.

photos courtesy of Autoblog
Ford Taurus SHO
Many historians believe the Ford Taurus SHO’s Yamaha-tuned 3.0-liter V6 engine was initially designed to power a mid-engined Pontiac Fiero-fighting sports car.  Ford reportedly pulled the plug on the project but decided to put the engine to good use by bolting it in the Taurus’ engine bay.
While the stock Taurus was designed to take on plebeian cars like the Honda Accord, the SVO-developed Super High Output (SHO) model gunned for premium sports sedans hailing from the Old Continent.  The 220-horsepower V6 was exclusively linked to a five-speed manual transmission – clearly, the SHO was aimed at enthusiasts.
Chassis and suspension modifications helped the SHO handle noticeably better than the run-of-the-mill Taurus.  The SHO was so well executed that Car & Driver named it “America’s Best Sedan” in December of 1988.
Although Ford initially planned on selling the SHO for a single model year, high demand convinced the Blue Oval to keep it around and continuously improve it.

Honda CR-X (mk1)
Introduced in Japan in 1983, the Honda Civic CR-X was billed as a sportier alternative to the frugal Civic hatchback.  It was less practical than its family-focused sibling because it only offered space for two occupants, but it provided a pure, undiluted driving experience that won over legions of fans.
In the United States, the base CR-X was powered by a 1.5-liter four-cylinder engine that made 57 horsepower.  With 91 ponies for just 1,977 pounds, the more powerful CR-X Si provided a new interpretation of the lightweight, bare-bones sports car.

Mazda MX-5 Miata
The Mazda MX-5 Miata was presented to the public at the 1989 edition of the Chicago Motor Show, meaning it qualifies for this list with just 10 months to spare.  The Miata was a modern take on the classic rear-wheel drive roadsters that European companies like Fiat and Alfa Romeo had perfected in the 1960s and 1970s but had largely failed to bring up to 1980s standards.
Nimble to drive, quick and affordable, the Miata was met with instant success.  Motor Trend called it “the best sports car in America” shortly after it was introduced, and the Miata unsurprisingly went on to become one of the most popular roadsters in recent memory.

Peugeot 205 GTI
The 205 hatchback was Peugeots’ response to the Volkswagen Golf.  In order to compete against its rival on every market segment, Peugeot introduced a performance-focused version of the 205 dubbed GTI in 1984.  The recipe was simple: Starting with a stock three-door 205 body shell, Peugeot installed performance-tuned suspension components, a sporty interior and a relatively fuel-efficient 1.6-liter four-cylinder engine rated at 105 horsepower.
Journalists and enthusiasts alike praised the 205 GTI’s rev-happy engine, kart-like handling and reasonable base price.  It was the textbook definition of a hot hatch, the kind of car that sent shivers down the spines of Volkswagen executives in Wolfsburg.
Peugeot later introduced a more expensive version of the GTI powered by a 130-horsepower 1.9-liter four, but the early 1.6-liter model remains a favorite among brand enthusiasts.
The 205 GTI was never officially distributed in the United States.  However, early examples that are over 25-years old are starting to show up on these shores via gray market channels.

Porsche 944
The Porsche 944 looked like a lower and wider evolution of the 924 but, generally speaking, the similarities were only skin-deep.  While the 924 was powered by an oft-criticized 2.0-liter four-cylinder engine that traced its origins back to the Audi parts bin, the 944 was fitted with a new 2.5-liter four that was essentially a 928-sourced 5.0-liter V8 cut in half.  Power was sent to the rear wheels via a rear-mounted transaxle, a setup also found on the Alfa Romeo Alfetta and, later, the GTV 6 and the Milano.
As a result, the 944 was as well-balanced as the 924 but it was more powerful, it handled better thanks to a tweaked chassis and it boasted more powerful brakes.  To Porsche fans, the 944 was what the 924 should have been all along.
A turbocharged model was launched in 1985 with a 220-horsepower engine, and later 944s were upgraded with a 3.0-liter mill that made 200 horsepower.
Tags:
1980sBMWFordPorscheTop 10