Ten Cars from the 1970s That Every Enthusiast Should Drive 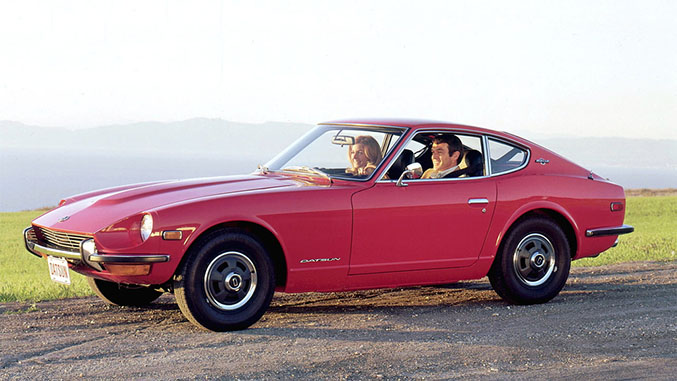 In the 1970s, the automotive industry arrived at one of the most important turning points since its inception. The decade was overshadowed by the OPEC oil embargo that rocked the world in 1973, sending gas prices through the roof and governments all around the globe scrambling to pass strict emissions regulations.
Automakers were consequently forced to seriously look into ways to build lighter, more fuel-efficient vehicles. Some figured how out to take advantage of the situation and designed truly great cars that still stand out today. Certain models raised eyebrows thanks to innovative engines, some boasted breath-taking designs while others are remembered for being extraordinarily normal.
We’re taking a look at ten cars from the 1970s that every enthusiast should drive at least once in his or her life. Let us know in the comment section below what car(s) you think should be on the list.

Autobianchi A112 Abarth
Volkswagen claims it invented the hot hatch when it introduced the GTI in 1976, but the honor really goes to Fiat’s now-defunct Autobianchi brand and the A112 Abarth. The A112 was designed to compete against the Austin Mini but it was slightly bigger than its British rival and it offered a generously-sized hatch that made it more practical.
As for the “hot” aspect, the Abarth-tuned model introduced in 1971 ditched the base A112’s Fiat 850-derived 903cc four-cylinder engine in favor of an upgraded 982cc unit rated at 58 horsepower, a reasonable amount considering the car weighed just 1,520 pounds. Suspension and brake modifications turned the tiny city car into a street-legal go-kart capable of carrying a week’s worth of groceries.
The Abarth’s displacement was increased over the course of the 1970s. The most powerful A112 Abarth was equipped with a 70-horsepower four-cylinder engine.
The A112 Abarth was never officially sold in the United States but gray-market imports have trickled in over the past few years.

Citroën SM
When Citroën purchased Maserati in 1968, it decided to develop a touring car that seamlessly blended comfort and performance in order to display the two companies’ combined industrial might. Launched in 1970, the Citroën SM was powered by 2.7-liter V6 engine that was essentially a Maserati Indy-sourced V8 with two cylinders chopped off.
The SM’s Italian heart was complemented by an evolution of the world-famous hydropneumatic suspension system that was found in the DS and an innovative power steering system called Diravi. Many journalists raved the SM drove like no other car on the planet, but sales were disappointing and the SM was axed without a successor in sight after Peugeot agreed to purchase ailing Citroën from Michelin.

Datsun 240Z
The Datsun 240Z was introduced in late 1969 as a 1970 model, meaning it barely qualifies for this list. It wasn’t the first sports car to come out of Japan but it was one of the most important ones in the United States because it became highly popular almost overnight.
The 240Z featured a stunning design that drew inspiration from both the Jaguar E-Type and the Toyota 2000GT. On the road, it was often compared to popular Italian and British roadsters thanks to its smooth overhead-cam straight-six engine.
The Z-Car, as it became known, was fitted with a 2.6-liter engine in 1974 to offset the loss of power caused by newly-installed emissions equipment, and it was upgraded again the following year with a 2.8-liter mill. A more family-friendly version with a longer wheelbase and a 2+2 seating arrangement joined the lineup at about the same time, but the pick of the litter remains the original 240Z.

DeTomaso Pantera
DeTomaso presented the Pantera at the 1970 New York Motor Show. It looked similar to the earlier Mangusta when viewed from the outside but it featured a more conventional decklid in lieu of its predecessor’s funky barn-style doors. Additionally, a look under the car revealed the Pantera rode on a monocoque chassis, not on a backbone chassis like the Mangusta.
The Pantera’s unique selling point was that it was powered by a mid-mounted Ford-sourced V8 engine, allowing anyone with about $10,000 to spare to buy an exotic supercar from their local Lincoln-Mercury dealership.
The Pantera was not particularly well received, especially since early examples suffered from a host of issues including overheating engines and inadequate brakes. Ford and DeTomaso worked together to fix the bulk of issues and the Pantera earned Road & Track’s Import Car of the Year award in 1973.

Mazda RX-7
Picking up where Datsun’s Z-Car left off, the RX-7 was powered by a unique twin-rotor Wankel engine that sent 100 horsepower to the rear wheels in its most basic state of tune. The Wankel was so rev-happy that Mazda saw it fit to install a buzzer that warned the driver when the engine was getting close to redline.
The Wankel was mounted between the front axle and the firewall, allowing the driver to easily exploit the RX-7’s full potential both on the road and on the track. Production of Mazda’s rotary-engined coupe kicked off in 1978 and continued until a second-generation model arrived in 1986.

Mercedes-Benz 450 SEL 6.9
Mercedes-Benz wisely waited until after the 1973 oil crisis to introduce the 450 SEL 6.9, its new flagship sedan. As the alphanumeric nameplate implies, the 450 SEL 6.9 was a standard 450 SEL powered by a massive 6.9-liter engine that traced its roots back to the w100 600. The V8 sent 286 horsepower and an earth-shattering 420 lb-ft. of torque to the rear wheels via a three-speed automatic transmission, figures allowed the sedan to reach a top speed of over 140 mph.
An innovative hydropneumatic suspension system gave the SEL handling characteristics that were downright impressive considering the behemoth weighed over 4,200 pounds.
As expected, Mercedes’ super sedan wasn’t cheap. In 1977 it cost $39,377, about $13,000 more than a standard 450 SEL and nearly ten times the price of a base-model Volkswagen Rabbit. Buyers lucky enough to purchase one drove home from the dealership in one of the world’s fastest four-door sedans.

Plymouth Road Runner SuperBird
Inspired by the Dodge Daytona, Plymouth added a pointed front end and a tall rear wing to the Road Runner and created the SuperBird in 1970. It was designed to compete in NASCAR races and sold to the public exclusively for homologation purposes.
The SuperBird could be ordered with one of three V8 engines rated at 375, 390 and 425 horsepower, respectively. Regardless of what lurked under the hood, period road tests indicated the extra downforce became particularly noticeable above 60 mph, and the SuperBird helped prove that muscle cars were about more than simply raw displacement.
Plymouth built 1,920 examples of the arrow-shaped coupe. Although it is one of the more sought-after and valuable muscle cars today, the SuperBird was not very popular when it was new and dealers reportedly had a hard time selling them.

Porsche 911 Turbo (930)
Applying technology gleaned from its racing program, Porsche presented an experimental turbocharged 911 at the 1973 edition of the Frankfurt Motor Show. The car generated a favorable response among show-goers so it was added to Porsche’s European lineup as a regular production model in time for the 1975 model year.
Power initially came from a 3.0-liter flat-six that sent 260 horsepower and 253 lb-ft. of torque to the rear wheels through a four-speed manual transmission. The 911 Turbo (called 930 internally) was capable of reaching 60 mph from a stop in 5.2 seconds, a figure that earned it the coveted distinction of being the fastest regular-production German car on the market.

Saab 99 Turbo
Perhaps inspired by the aforementioned 930, Saab became one of the first automakers to install a turbocharged engine in a full-production passenger car. The automaker started with the 99’s tried-and-tested 2.0-liter four-cylinder engine and added a Garret-built turbocharger to generate 145 horsepower and 174 lb-ft. of torque. Power was sent to the front wheels – another novel concept at the time – via a four-speed manual transmission.
The Turbo was a brilliant performer but it arrived too late in the 99’s production run to earn the popularity it deserved. Thankfully, Saab continued down the forced induction path and helped democratize the turbo in the late-1970s and early-1980s by fitting it to the 900.

Volkswagen Beetle
It likely seems odd to include the Volkswagen Beetle in this article because it wasn’t introduced in the 1970s and it is admittedly a little mundane compared to sleek, high-performance cars like the Citroën SM and the DeTomaso Pantera. However, the Beetle reached the zenith of its long career on these shores in the 1970s and it played a large part in propelling Volkswagen of America to a height that it has yet to see again.
By the turn of the 1970s, the 32-year old Beetle had surpassed similarly-priced models built by other European manufacturers like Fiat and Renault and become the de-facto import car for families seeking a small, relatively fuel-efficient and affordable mode of transportation. Volkswagen sold 569,696 cars in the United States in 1970, an all-time high even today, and it held a remarkable seven-percent share of the nation’s passenger car market. The company’s best-seller that year was by far the Beetle, cementing its spot as one of the most influential cars in 1970s America.
The Beetle didn’t become America’s hottest import by dumb luck. Although outdated in many ways, it remained a solid, well-built and delightfully simple car.
Tags:
fiatTop 10Volkswagen