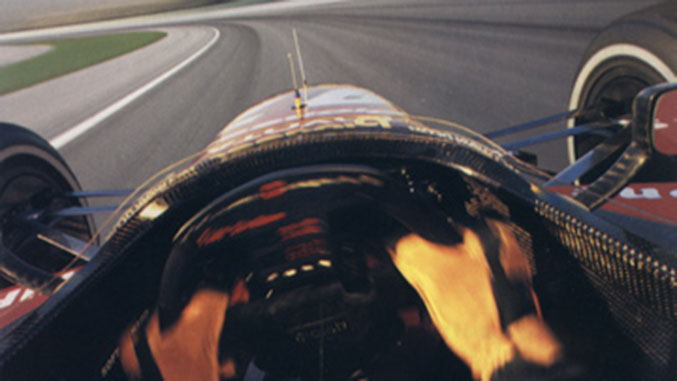 One of the strangest things taught by some schools to performance and race drivers is how to turn the steering wheel. Some tell their students to push up on the wheel with their outside hand (using the other hand to dampen the movement), and some teach pulling down with the inside hand. The "push up" teachers suggest that it gives more precision, while the "pull down" group says you have more strength or leverage that way. This is something I’ve personally experimented with, thought long and hard about, and listened carefully to the opinions of others. And still, I think both of these camps are crazy silly. -Ross
First of all, I think it’s something that gets far too much attention. I think that if we let people push or pull naturally, they will do the right thing.
Second, driving a car is a two-handed sport, and that applies to which hand leads the way when turning the steering wheel. I don’t think one should do the bulk of the work – I think both should. In other words, pushing up or pulling down is not something we should be emphasizing. We should be emphasizing that both hands should do an equal amount of work. Think about it: If we have a round steering wheel, and we have two hands equally spaced out on either side of that “circle" at the 9 and 3 o’clock position, why would we not use both hands equally? It makes no sense to me to use one more than the other. I hear the arguments for both the push up and pull down methods, but they really don’t outweigh the benefits of using both hands equally.
Finally, from a learning factors perspective, telling someone – especially someone fairly new to the sport, and someone already feeling the stress of doing something relatively risky – to push up on the steering wheel, or pull down on the steering wheel is over-complicating things. It’s taking the act of driving and making it too granular. Sure, I believe in teaching good habits from the very beginning, but not to the point of making a student have to over-think what comes naturally to them (if they have two hands on the steering – a habit that I definitely do focus on building – then they will use both hands relatively equally).

I used to teach/coach tennis years ago, and I learned a lot about how to help people learn skills. I also learned how to slow the process of learning down (unfortunately!). It’s critical to determine what skills/techniques should be taught from the very beginning, and what should be left to the person’s natural tendencies.
As an example (and if you’ve played much tennis, you’ll get this), during a serve, one should exhale as you hit the ball. That’s a good habit to develop. But if you tell a relatively new tennis student to exhale while hitting the ball, you’ll spend more time picking those balls out of the net – the results are terrible. Why? Because the focus is on the wrong things. The focus should be on hitting the ball over the net and into the service court. And I noticed something interesting when teaching tennis (something that I later read that great tennis coaches know): when people hit a serve, they naturally exhale. So, to tell them to exhale would only slow the learning process down.
A funny thing related to that: When playing a “fun” tennis match, I would sometimes say to my opponent during a break, “You have a great serve. I’m curious, do you exhale or inhale when you hit your serve?” From that point on in the match, my opponent would miss more serves than ever before – because he was focused on the wrong thing – his breathing. And my question made him start to do things consciously that he would normally do subconsciously.
Do you want to slow a competitor down on the track? Ask him if he pushes the steering wheel up, or pulls down on it! Rather than focus on what’s important, he will then be focused on what’s not.
What’s most important is that a driver’s hands and arms are relaxed. They’ll take in better feedback from the car that way. And it’s easier to be relaxed when focused on just turning the wheel, and allowing both arms to do the work.
Tags:
ross bentley speed secrets