Speed Secrets: What Tools Are In *Your* Instructor Toolbox? 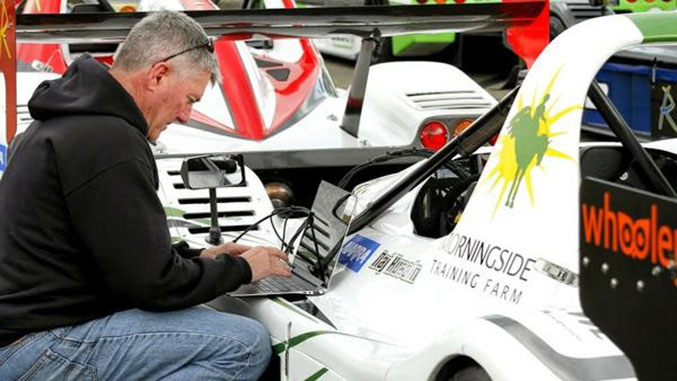 This week's contributor, Bill Wade, has delivered more than his fair share of training to other drivers, both on and off the track. As a long-time BMW Car Club of America member (he was a founding member of the Kentucky chapter), and HPDE instructor, Bill has been driving on tracks around the country for over 25 years. He was also the Chair of the BMW CCA National Driving Events Committee for almost 10 years. In addition, he's the program manager for the Tire Rack Street Survival program, a driver training program aimed at helping young teen drivers survive on the street. In other words, Bill knows what he's talking about when it comes to instructing. – Ross

Having just returned from an incredible event (training four California chapters of our BMW Club HPDE's instructors), someone asked me "Who was your most difficult student and how did you fix the problems?" I've decided to share this experience as an example of how you must sometimes use all the tools in your Instructor Toolbox.

We were at a famous race track I know very well. One of my two students for the weekend was a novice-level driver who had been to this track a couple of times, as well as one other track in the area. He was still a 'D' level student; the first Warning Flag went up. I found my student in the paddock and Warning Flag number two starting flying. The car had many "enhancements" of the sticker variety, each worth about 5 HP in the driver’s mind, I'm sure. This was a small car, not known for its horsepower and was an automatic to boot. Okay, challenge presented and accepted. We look at the car together while I ask questions, getting him to talk about his experience and expectations for the weekend. "I want to go faster," he says. Okay. I remind him that he drove the car to the track and it was my goal to make him faster where we could, at the same time keeping it possible for him to drive the car home.

We head out for the first lap. He has been to this track before, he says, and fairly recently, but where he’s placing the car is all wrong, like on the wrong side of the track wrong. I let him drive a lap or two without saying anything to allow him to get the cobwebs out of his head. I'm formulating a plan when I notice each lap is similar to Drew Barrymore's movie "50 First Dates." Each time we cross the Start/Finish line, it's a different track. There is zero consistency in where he's driving. The only place he's consistent is at a particular corner where there’s curbing – he’s driving close to it, but staying next to it waaaay too long. He said he had been told to do that by a previous instructor. I ask him to try it my way. I ask him more about this instruction and discover that it was from another track entirely. He assumed it meant the same thing at this track. It wasn't about how to drive; it was specific on where to drive at a particular corner, hooking the curbing – and staying at the curbing – all the way around to the apex. I had to tell him not to transfer that kind of information, where to track in, apex, track out from another track. This corner, the apex was about a third of the way around the curb; the track he was referencing was about three quarters around. Totally different and not appropriate for this situation.

The instructions I gave him on the previous lap didn't transfer over to the next lap. It appeared that he didn't have the ability to retain a lot of information in a short amount of time. So I attempted to break the track down into smaller pieces a la the "How do you eat an elephant? One bite at a time" approach. That didn’t help, either. As soon as he would consistently piece two corners together, I would add a third. Then, the first one would be wrong.

That session ended and as we started the next, he was telling me about another student in class who was asking the dumbest questions and slowing the class down. He stated that because he had been in the run group so long, he already knew all this stuff. At that moment, the "dumb student" got a point-by from my student, who ramped up the rant. I got him to focus on his driving and he was quiet…for a while. Towards the end of the session, he had to give another point-by, and the rant started again. I reminded him that she was driving faster than he was, that she had lapped him, and he was quiet again.

This went on for the next session, as well. I tried all the tactics I knew. Simply driving from cone to cone and trying to connect the dots didn’t work. Having him look for places on the track surface to remember where to be – cracks in the pavement, paint spots on the curbing that could be differentiated from the others – didn’t work. Using unique trees, fencing, banners outside of the track within his field of vision to place the car on the correct path didn't work. I was thinking that this guy has picked the wrong sport and a banner of 'OSB' (Other Sports Beckon) was starting to fly over this driver and his car.

During the last session, he started asking questions about the next day. It seemed he had an opportunity that night to attend a function with friends whom he hadn’t seen in a very long time. He was trying to decide what to do. Go to this function or go home and come back for another day at the track. He couldn’t do both. Since it would seem another day wasn't really going to help, I was delicately encouraging him to go to the event. I'm not very proud of that, but I just couldn’t seem to get through to this guy. He was being safe, but VERY slow. He seemed to manage traffic well because he had his arm out the window giving point-bys all the time. But how much fun could this be for him? He said he really wanted to go see his friends, but that he was really having a good time with me and I was really helping (?!!). He said "Maybe I'll watch that video again." Ahhh…let's try this, I thought.

Before the plethora of in-car videos, this track had produced a video showing the line around the track from different views, above the car, from the driver’s viewpoint, and so on. He said he had watched it a couple of times before coming to the track. I wanted to challenge that statement, but it didn’t seem productive at the time. I said, "If you’re coming back tomorrow, I've got homework for you. Go eat a good dinner, relax, and when you’re ready for bed, turn on the video. Watch it from the driver’s point of view ten times in a row, back to back, turn it off, and go to sleep. Don't read, don’t watch any other TV. Once you close your eyes, drive the track with that view until you fall asleep.” I use this method to get my brain to turn off at night when I'm stressed about something. I drive my favorite tracks in my head. I know it has helped me, I just didn’t know if it would help Mr. OSB. He said he'd think about it.

Next morning, I was waiting at the grid, kind of hoping that I wouldn't see his car turn the corner for the first session. Almost every car had come up and I was starting to think I was going to have an easy day, focusing on my other student (who was really starting to put it together in a fun way). Then he pulled up. Sigh…I buckled in and we headed out onto the track. On the first turn from the pits, he nails it. Well…okay. He got lucky on that one a couple of times yesterday. Let's see how he does with… BANG! he gets the second one. The third he struggled with, but was much better than yesterday. I'm speechless. I let him drive for two more laps before saying "HOLY CRAP! What happened?! You're doing great!" I immediately felt bad saying it like that but he took it in the best way, smiled, and said "I don’t know. I just did what you said. I watched the video and went to sleep. I think I'm getting it now." Boy, was he ever! He was picking up speed and smoothing the line out. We still had to work at it; the faster he got, the more he had to adjust and correct things. The crowning moment was when he passed his nemesis in the last session, just as the sun was setting. I have seen him since, he's still at it, and smiling all the way.

So keep adding tools to your Toolbox. If the student isn’t hearing you, try a different technique. One way to pick up new methods is to find the seasoned veterans, listen to their stories in the bar, and distill the B.S. down to the true message – what was the issue, how did they fix it and what would they do differently. Build your Instructor Toolbox and use your tools, creatively. You might just get through to that one challenging student.