Speed Secrets: The Elements of a Great Racing Instructor 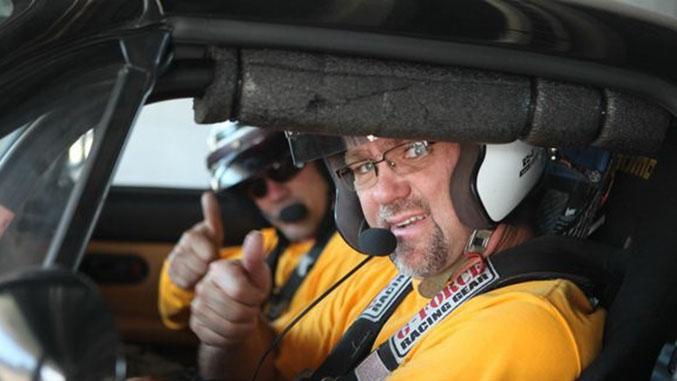 Think back to the best instructor you've ever had, whether your experience was in motorsports or some other activity. If you really take the time to recall this person, I suspect two things happened: first, a smile came to your face; second, you can still remember much of what he or she taught you (the same can't be said for the not-so-good instructors you've had in your life). Mark Hicks, who since 2004 has been General Manager and Chief Inspiration Officer of Chin Motorsports, knows more than just a little about what makes a great instructor. – Ross

Much has been written already, and much more is sure to be written still, about the infinite range of topics on techniques for the advanced driver. Rather than breaking down the subtleties of traction management or data analysis, instead, let’s spend a moment to analyze a component that is critical to the continuing success of amateur motorsports – the instructor.

The SSW reader is generally someone who already has a commitment to motorsports as a hobby/business/competition; many are already instructors/coaches/professional drivers. But none of us were born an instructor. We all began in motorsports as novices once upon a time. We gained experience and evolved as drivers. Eventually, we became well-rounded enough to begin to provide guidance to others. And we continued to evolve, yes? Hopefully, if one is doing it right; you are not the same instructor today that you were when you first began instructing. So, instructor: who are you now? Are you merely a skilled driver who gives directions to others, or have you moved beyond just giving directions and achieved the distinction of being a true mentor; one who motivates and inspires a driver to do great things? A successful mentor must do much more than just give driving tips. He must adeptly perform numerous roles, and be able to switch those roles seamlessly. Have you taken time to recognize these roles?

The instructor as psychologist works to put the student at ease, as well as find out what’s on their mind. Specific questions can give both instructor and student insight into the other person, revealing if there are compatible skills and attitudes that can be capitalized on. Ask “What are your goals today?” and ”Why have you chosen to do a track event?” Look beyond first impressions: a student who is reserved and aloof at first may turn out to be a focused and progressive driver. Others, who seem to exhibit all the positive traits in the paddock, can inexplicably become possessed by demons when leaving the pit lane.

The diplomat establishes his authority – without it, both instructor and student are doomed. There can be only one of you in command in the car. Be confident that the student wants to be led…so, lead him! If you leave a void of uncertainty, then the student will fill it with inexperience. The diplomat doesn’t COMMAND authority from the student; instead, the diplomat persuades the student to recognize that he is a trusted expert who will prioritize the student’s best interests.

The instructor as strategist clarifies terminology and sets objectives for what both student and teacher expect to happen on the track, and defines a progressive path to success. During a session, the strategist can emphasize the task at hand by referring to the original objectives: “What are you supposed to be working on in this session?” “Let’s learn the line before you overtake anyone.”

The tactician changes priorities as needed. When the student is overcome with “red mist” and chases the car ahead, it’s prudent to instantly refocus the driver’s attention. “Slow down enough to be able to touch every apex.” “Drive in one gear for a lap.” For an advanced driver, it may be a new challenge: “Enter all corners off line for one lap.” These are tactical moves.

The instructor’s role as communicator is responsible for the proper flow of accurate information and is sensitive to the amount of information that can be absorbed. Always coach what’s in the windshield, NOT what’s in the mirror! If the driver has made a mistake, the communicator and the tactician simultaneously focus the driver on the turn ahead without looking back. The strategist waits for the lap to come back to the segment with the mistake, and then coaches the previous error when it’s in the windshield again. In general, anything said by the instructor while on the track should be succinct guidance on car inputs. Explanations about vehicle dynamics are best left for the paddock. It’s also important to be sure that what is being said is actually being heard and understood. Check in with: “What did I ask you to do?” “Are you comfortable at this speed?” From the student: “No? I thought you said Go!”

Also, the communicator uses a communicator! A helmet-to-helmet intercom is an absolute necessity to be a great mentor. Yelling from the right seat is a mistake from the get-go! An instructor without a communicator must raise his voice to be heard in the cockpit. This is a natural source of stress for both driver and instructor.

Many students are high-achieving individuals, accustomed to succeeding in their professional lives. They begin the event with some confidence that they are already a good driver, and assume that they will quickly succeed at a driver education track day. But, driving well is not inherent, nor natural. The learning curve can be surprisingly frustrating for the track neophyte. The nurturer addresses their frustration as they attempt to perform unfamiliar and challenging tasks in a stressful environment. The student needs to hear some positive reinforcement: “Well done, nice apex.” A recognized success, no matter how minor, will do wonders to break a cycle of mistakes and dispel the feeling of being overwhelmed and discouraged.

The disciplinarian sometimes needs to appear for everyone’s safety, not only for the instructor and student, but for other drivers as well. The instructor must always be unambiguous about who’s in charge. A student may need to take a break after repeated failure to follow directions: “If that happens again, we will pit and discuss it in the paddock.”

The motivator rewards achievement and encourages continuing success. Going faster as a result of successful performance provides a powerful incentive. The motivator inspires the driver to go faster, and at the same time, avoids encouraging him to chase the car ahead. “Continue to do as well in the next few corners, and you’ll erase the gap to the car ahead.”

The instructor as sportsman sets the example for good behavior. Showing respect for others on and off the track are key qualities of the track day culture. “You can’t pass here, no need to follow so closely.” “Give them a wave as you overtake to acknowledge the point-by.”

A good instructor is also a good student, open to new ideas and techniques to use and pass on to others. If an instructor is still coaching today the same way as he did years ago, he is not being a good student. Every instructor has an opportunity to improve whenever they are in the company of a student: “Tell me if what I say isn’t clear.” “Do you have any suggestions for me?” “Is this too much or too little information?”

So, who are you now? As an instructor/coach you play all of these roles, often simultaneously. Teaching someone to find their way around a race track, and to use his car effectively, is a complex interaction between two people. A better understanding of this interaction, with improved insight into the person sitting next to you, will lead to your own greater success as your student says, “AHA, I GET IT!” and affirms the rewarding gratification that inspires you to return to the instructor’s seat.

If you are one of the thousands of instructors and coaches who make the track hobby go ‘round, you deserve high praise and thanks. Be well-prepared to serve your student as an inspiring mentor, not just as a skilled driver giving directions. Recognize the difference. Enjoy your laps!

Substantial credit for some original content and inspiration for this article goes to my collaborator, Jim Adelman. Jim is a long-time instructor with Chin Motorsports and several PCA chapters. Many of his words are used here with his permission. Thanks, Jim!

Class One: New Regulations To Combine DTM and Super GT